Closing the Gap for Women in Business 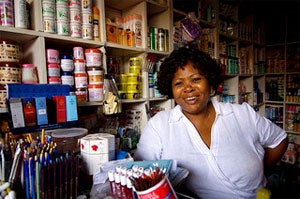 A woman works in a small shop in Ghana.
Photo by Arne Hoel

What will it take for the world to wake up and realize the advantages of supporting women entrepreneurs in the developing world?

If that sounds like an odd question to be asking in the 21st century, just consider some facts. We know that globally women make up almost half the world’s workforce. And we know that in developing economies, 30-40% of entrepreneurs running small or medium sized businesses are women.

But here’s something you may not know – at least 9 out of 10 women-owned businesses have no access to loans. So, just imagine the frustration of a woman in a developing country, who has started a small business, is attracting a good clientele, has a business plan to grow her business, but can’t get a loan to expand. That's not an isolated story. It’s a frustration shared by many women in the developing world. And the frustration of those women sounds echoingly similar to the frustration still lingering in the voices of older women from rich countries, telling how some three decades ago they were refused bank home loans, despite having a guaranteed income.

Today in the developing world, we know if women are entrepreneurial, they’re likely to be operating in smaller firms and less profitable sectors. Why? Quite simply because of lack of access to finance. Just consider the case of Guatemala, where self-employed women are half as likely as self-employed men to have access to credit.

So perhaps the question also should be – why is it that banks are turning a blind eye to women-owned businesses? Sometimes legal constraints don't allow women to control their own finances - that's something only male heads of households can do. Sometimes it’s a lack of traditional collateral, because women don't have land or property rights, sometimes it’s simply prejudice. The result is that in Sub-Saharan Africa, more often than not, women who apply for loans don’t get them. In Latin America, more women-owned enterprises are able to obtain loans, but the size of the loans often doesn't match their needs.

And it’s not only prejudicial, it's short-sighted. In the United States today, women-owned firms are growing at more than double the rate of all other firms. It’s estimated they contribute nearly $3 trillion to the US economy – and are directly responsible for 23 million jobs. So investing in women entrepreneurs is smart economics.

There are some rays of hope. Access Bank in Nigeria and the Development Finance Company of Uganda – countries with very dynamic and growing women owned business – moved a few years back to try and capture what they recognized as a new market. They partnered with the World Bank Group’s private sector arm, IFC, the International Finance Corporation, to develop special women in business programs. The results paid off. Loans went up. (And the non performing ratio was less than 1.5%). In Nigeria, the bank was innovative in coming up with alternative collateral that women could use, like pledging jewelry and equipment. In Uganda, new products were developed more in line with the needs of women entrepreneurs, such as allowing women - who lack the conventional securities to get a business loan - to borrow instead as a group. It’s little wonder both banks won awards from the Global Banking Alliance for Women.

We are now building up the evidence to help inform the debate about tackling discrimination and barriers against women. Our Women, Business and the Law Initiative provides data from 142 countries on legal areas that impact women’s economic rights and access to assets.

And we’re following through – IFC has set itself the goal of ensuring that in coming years 25% of loans provided to small and medium sized enterprises through financial intermediaries go to women-owned businesses. And once we hit that target we need to grow it further.

But much more needs to be done. It’s time all financial institutions took off the blinkers and supported women entrepreneurs in the developing world.

Empowering women entrepreneurs is good for development and business. For more, tune in to World Bank Live on October 11, 2012 10:30 a.m JST Culturally I think we believe that women in business will not succeed and so tend to back businesses that have men at the helm. I have seen women who work with their spouses take on the brunt of the work and yet get sidelined when it comes to getting their due. Not just loans, even the benefits of something like the network are more biased toward men. Women in any world, developing or otherwise work harder than men. It is time the world realized it and profited from having such hard working entrepreneurs.

If all the women in the world decided to support each other unconditionally the problem would be solved! Let's work together to make it happen...the alternative no longer makes sense!

Caroline, thank you for the fascinating post about supporting women entrepreneurs in emerging markets. Providing women entrepreneurs with the tools to succeed is essential to helping nations develop. The Overseas Private Investment Corporation (OPIC) also sees the importance of providing funding to women entrepreneurs. In 2006, OPIC agreed to provide a $100 million loan facility to Citi to help deepen funding for microfinance for the world’s poorest people. The commitment, which has since expanded to $350 million, has supported one million borrowers, 90% of whom were women. We hope this will help close the gap for women in business and create equal and better opportunities for all. http://www.opic.gov/blog/impact-investing/at-u-n-and-cgi-u-s-highlights…

Wow, nice post,there are many person searching about that now they will find enough resources by your post.Thank you for sharing to us.Please one more post about that.<a href="http://www.slideshare.net/dirkkettlewell">Dirk Kettlewell</a>

Hey there just wanted to give you a quick heads up.
The words in your article seem to be running off the screen in
Ie. I'm not sure if this is a format issue or something to do with internet browser compatibility but I thought I'd post to let you know.
The design and style look great though! Hope you get the issue
resolved soon. Cheers