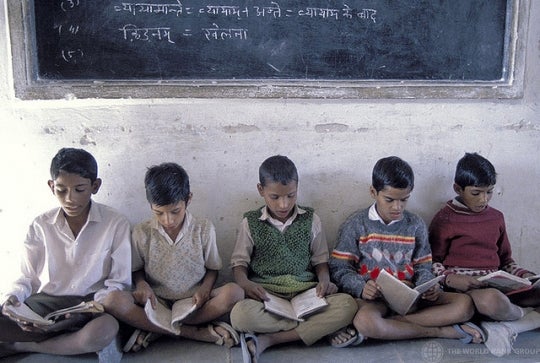 The socialization of boys shapes their expectations of the appropriate roles and behavior of girls, in contrast to their own, and validates the superiority of men over women. These norms are often strengthened and reconstructed by the families, communities and social institutions that they belong to.

The prevailing rigid notions of masculinity influence how men interact with women, including engaging in violence against women, risky sexual behavior or actions that limit women’s agency. For instance, in many contexts, boys see teasing of girls as an affirmation of their masculinity and not as a violent act that can limit girls’ mobility or experience of public spaces.

Creating positive social norms that value girls and their rights is important to improve the well-being of girls and achieve long-term and sustainable social change. Engaging with men and boys is crucial to help them critically reassess notions of masculinity and question prevailing gender inequities.

Samata, a research study and program based in northern Karnataka, India, to support girls to complete secondary school, recently spoke with a group of 20 local adolescent boys aged 13 to 18 years. The interviews sought to understand the boys’ views on adolescent girls’ participation in education, early marriage and gender norms, as well as boys’ behavior toward girls.

Findings from this exploratory study were complex. For example, the interviews revealed that boys are willing to back girls’ education, not to help further girls’ careers or ambitions, but to ensure that they become good wives and mothers.

While willing to encourage families to continue girls’ schooling, the boys said they would prefer for girls to be less educated than their male peers. This is because they fear that education will make girls opinionated and give them agency to not conform to expected roles. Boys said that they have a right to decide on their sisters’ education, but believed they should have autonomy over decisions about their own education.

Boys consider it their duty to arrange their sisters’ marriage once they complete their education. They believe that girls should be married young (around 18 years of age) so as to prevent them from falling in love or being exposed to harassment.

Teasing was reported as a common problem that girls faced. Boys throw pebbles at girls, shout out ‘I love you’ or call them on their mobile phones or verbally abuse them. However, the respondents found it unacceptable when other boys tease their own sisters. All girls are to be viewed as sisters, many stated, and love or sexual attraction between girls and boys is considered wrong and forbidden, even at marriageable age.

Right to Control or Ridicule

The boys we interviewed think themselves to be physically superior. The ‘rough, physically demanding’ work that they do is ascribed a greater value than domestic tasks performed by women, such as cooking and cleaning. Support to girls is often seen in terms of control over their behavior or their mobility outside of home. Riding motorbikes, wearing western-style clothing, or hanging around outside are considered inappropriate behaviors for girls. Girls’ movements begin to be restricted by their parents and brothers from the time the girls reach menarche.

In short, masculine roles are perceived as not only different, but also superior to the feminine. Boys consider themselves to be defenders of the normative sex roles ascribed to girls and women, with a right to control or ridicule women who deviate from these norms.

This is a problem not just at the individual level but one that reaches the larger social construction of gender relations. Given this context, how can boys be engaged to transform gender roles and involved with efforts to empower girls?

Samata is working with boys using the Parivartan model to transform their attitudes toward gender, emphasizing the need for equal roles for girls and women in society.

Parivartan engages local athletic coaches to deliver violence prevention scripts and tools to adolescent male athletes from the same locality, to alter norms that foster aggression and violence, promote bystander intervention, and reduce physical and sexual assault. Every week, these coaches spend one hour with the boys playing games like cricket or kho kho and initiate discussions on respect, equity and violence in sports and extend it to real life situations. Popular sports thus become a channel to communicate positive messages on masculinity and respect for women, and a venue for learning about gender roles and relationships.

In addition, the program sponsors neighborhood dialogue sessions to encourage boys to critically reflect on issues related to gender, sex, sexuality, and violence, which affect retention of girls in school. Program facilitators also nurture ‘boy champions’ to promote girls’ education within their own families.

Those involved in Samata are seeing early signs that deliberate discussions with boys -- on gender and masculinity -- help create positive gender norms, and reduce gender-based violence. We hope such open dialogue can eliminate barriers to girls’ education in Karnataka.

This post is based on the findings of a study conducted by Karnataka Health Promotion Trust as part of the STRIVE consortium and analyzed by Hannah Shephard-Lewis from the London School of Hygiene and Tropical Medicine.

The Samata project, as well as its research and evaluation components, is supported by the World Bank Group, the government of Karnataka and – through the STRIVE consortium – UKaid/ Department for International Development. The views expressed in this post do not necessarily reflect partners’ official policies.