A Food System that can feed everyone, everyday, everywhere 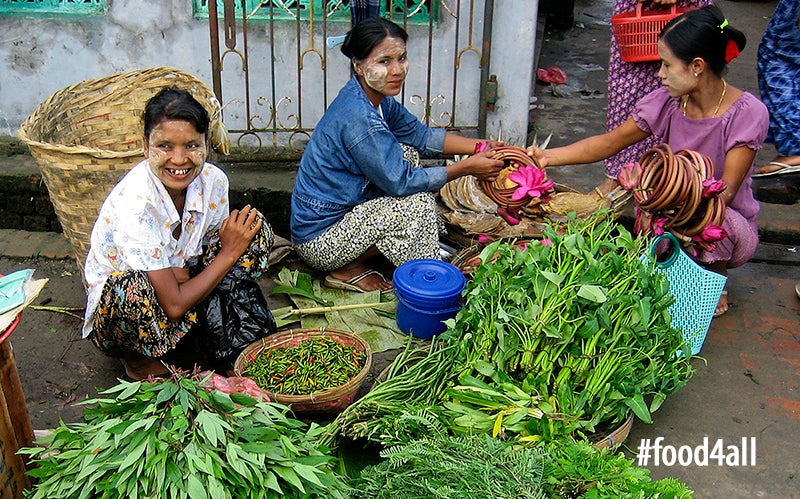 Whether you’re a food producer or consumer, and no matter what part of the world you live in, I’m sure we can agree: The world needs a food system that can feed everyone, everyday, everywhere.

A food system that works for everyone can also create jobs and raise the incomes of smallholder farmers and rural residents who are 78 percent of the world’s poor people. After all, growth originating in agriculture is proven to be 2 to 4 times more effective at reducing poverty than growth originating in other sectors. An effective food system can also provide better nutrition, steward the world’s natural resources, and even be a part of the solution to climate change.

Collectively, we’ve made significant progress towards the Millennium Development Goal of halving poverty and hunger.  Smallholder productivity has also started to increase—in countries like Rwanda and Ethiopia, for example, higher cereal yields have been accompanied by significant reductions in poverty rates. But 800 million people still go to bed hungry every night.  And land and water scarcity, as well as climate change, could bring about significant declines in crop yields. So we still have a long way to go to sustainably feed the world now and in the future, and by 2030 there will be 8.4 billion people to feed, 1 billion more than today.

At the Bank, we’re interested in opening up the conversation to new ideas and new ways to feed the world.  We begin with a major event on April 16, Future of Food: A Conversation with Jim Yong Kim and David Chang. We believe that more efforts in the following areas can help us accelerate progress toward a food system that can feed the world:

Making agriculture more climate-smart: We need to accelerate investment in and implementation of climate smart-agriculture (CSA) approaches, which are aimed at higher productivity, greater climate resilience and lower GHG emissions. At the Bank, we’ve begun appraising our projects through a climate-smart lens, and ensuring that we deliver on CSA’s three aims.  We’re also a member of the Global Alliance on Climate Smart Agriculture.

Improving nutrition: We need to enable production of sufficient quantities and diversity of food, ensure food moves to where it is needed most, and create income gains for poor producers so they can access the food they need. Agriculture investments can also help improve nutritional outcomes with improved seeds; production of higher nutrient content foods such as pulses, dairy, fish, vegetables, and fruit; increased nutrition education; and technologies that reduce womens’ workloads.

Strengthening food value chains and improving market access: More food will be consumed in cities as the world urbanizes, and food consumption is projected to shift from diets dominated by grains and cereals, to include more meat, vegetables, and processed products. We need policies that help rather than hinder poor producers supplying these changing markets, and job creation in food processing. Improved roads and logistics, information on market prices, and better handling and storage of food can reduce loss and waste, and improve the safety of food we eat.

Improving gender equality is needed across all three areas. Women make up the largest share of farmers in developing countries, but they have fewer assets and less access to inputs and services than men. Evidence shows that if women farmers had the same access to resources as men, they could increase yields on their farms by up to 30 percent, and produce more food for more people and potentially reduce the number of hungry people by about 15 percent.

A food system that delivers sufficient food and nourishment, jobs, poverty reduction and prosperity is within reach. It will take broad partnerships and contributions from farmers, scientists, nutritionists and chefs—basically everyone who works to get food onto plates.  No one can do it alone, so at the Bank, we’re looking forward to working across sectors and with different groups who are as committed as we are to achieving food for all.

How do we build a food system that feeds everyone, everyday, everywhere? We’re opening up the conversation on the future of food to new ideas. Tune in April 16 and join the conversation with #food4all: http://live.worldbank.org/the-future-of-food-featuring-david-chang I would have two comments on what is stated in your text.
regarding climate-smart agriculture, what seems to be essential is to change the economic policy environment and the incentives which are, for the moment, going against such an agriculture (subsidies on energy consumption, on fertilizer in particular - read our article http://www.hungerexplained.org/Hungerexplained/News_20_December_2013.ht…)
as far as value chains are concerned, it is indispensable to improve producer organisation so that they can influence negotiations on price and obtain more remunerative prices for their produce. There is equally a need for enforcing rules that ensure a fair sharing of benefits among economic operators active in a particular value chain.
On hungerexplained.org, we have proposed ‘7 principles for ending hunger sustainably’ that you may want to consider in your discussion (http://www.hungerexplained.org/Hungerexplained/Seven_principles.html).
Thank you.

on worldhungerday.org I can't agree more, start with women and mobilise small holder farmers to end hunger sustainably for all @worldhungerday

Great article, agree on need for true collaboration and a focus on supporting women farmers who are planet's number 1 food producers. Today is World Hunger Day, a day that celebrates sustainable solutions to hunger and poverty www.worldhungerday.org #WorldHungerDay