Many consider statistics cold and faceless. I have always thought the opposite. There are multiple numbers in the development world that are striking and moving: the millions of people living on less than $1.25 a day; the number of children dying of preventable diseases or being unable to attend school regularly; or how many families have no access to safe water or electricity in today’s super-sophisticated technological world, just to mention a few.

But I have never found more compelling numbers than those related to food. In a world where 842 million people go to bed hungry every night, we actually produce sufficient food to provide, on average, 2,700 kilocalories every day, for everyone. In this same world:
If you want to know how many kilocalories someone living in your region loses or wastes, on average, check the following figure: 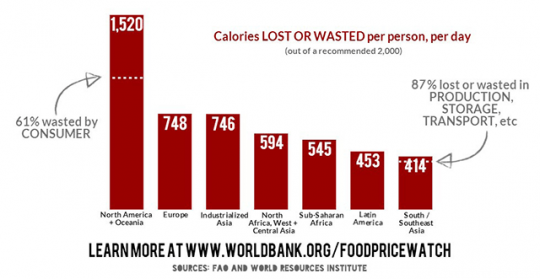 The newly released February 2014 Food Price Watch describes these statistics as “astonishing.” Food loss and food waste are serious threats to food security. But they also represent a hugely inefficient use of resources. It is estimated that for each calorie of food wasted, an additional 7 to 10 calories of inputs that are needed to produce that calorie are also wasted. Furthermore, food losses and waste squander investments in agriculture; produce unnecessary greenhouse gas emissions; generate enormous inefficiencies in the use of water, energy, fertilizers, and land; and reduce the incomes of (typically small) farmers, while requiring (poor) consumers to increase their spending to satisfy minimum calorie intakes. In other words, food loss and waste matter for poverty.


But food loss and waste are much more than just numbers. They are not simply another embarrassment of the riches or ludicrous irony. This situation is a quintessential reflection of the world we live in today, and the world we may be leaving to generations tomorrow. Future breakthroughs in agricultural production and climate change will mean very little to global food security if we continue losing and wasting so much of the food we produce.