Honoring (and learning from) leaders who make a difference 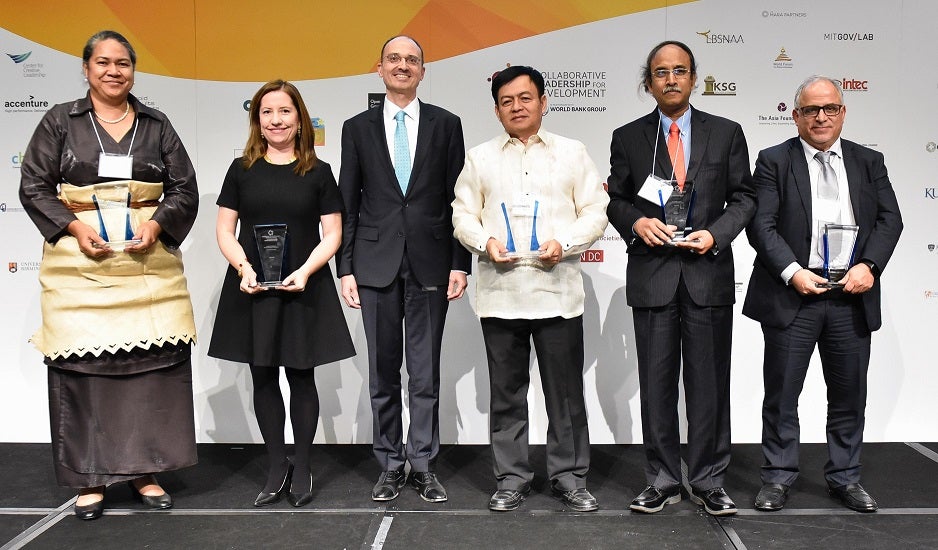 What kind of leader can bring people together for the common good, even amid clashing opinions or real conflict?

That question was at the heart of the 2017 Global Leadership Forum March 6 on the growing need for “collaborative leadership” in an age of increasingly polarized societies.

The event at the World Bank was organized with the Global Partnership for Collaborative Leadership in Development. It explored how to bridge often wide divides to arrive at inclusive solutions, and featured guests such as Festus G. Magae, a former President of Botswana and a South Sudan peace negotiator, and Frank Pearl Gonzalez, Chief Negotiator in the Colombian Peace Talks.

The forum also recognized five leaders from Bangladesh, Colombia, the Philippines, Tonga and Tunisia for their exceptional ability to mobilize people, ideas and resources to fight poverty and tackle other development challenges.  They are the first recipients of a non-monetary award, the Jose Edgardo Campos Collaborative Leadership Awards, in memory of Ed Campos, a World Bank political economist known for his anti-corruption and institution-building work. Ed was also a very inspirational leader, and a great musician.

Hailing from government, civil society, academia and the private sector, the experience of these five leaders offers insight into effective leadership qualities and tactics.

So what are their secrets and advice?

Paula Gaviria Betancur, Presidential High Counsellor for Human Rights, Colombia, said persistence, flexibility, and a firm belief in the end goal are key.  She received the Campos Award for Latin America and the Caribbean for her contributions to the peace accord between the Government of Colombia and the Revolutionary Armed Forces of Colombia.

“You have to be clear where you’re going,” said Betancur, who led an ambitious effort to reintegrate and otherwise aid the victims of the decades-long conflict. Colombia has so far compensated 700,000 victims, restored 200,000 hectares of land, and provided psycho-social assistance to more than 300,000 people, she said.

“You have to listen to everyone that’s out there that has fears, that has ideas also, that has questions. And when you make a mistake, and when you’re wrong, you have the capacity to accept it, and to overcome those difficulties.”

It’s also important not to take criticism personally, said Emeline Siale Ilolahia, Executive Director of the Civil Society Forum of Tonga and the recipient of the East Asia and Pacific award for her efforts to build coalitions for change.

When bringing together a diverse group of people, personalities often play a critical role, she said. “When you facilitate, you try to understand where they’re coming from and try not to have those prejudices drive or control what’s in the room.”

Her work has focused on building consensus around the qualities of good leadership in a country where the idea of democracy is relatively new. Traditionally a monarchy, Tonga became a constitutional monarchy and parliamentary democracy in 2010.

Gathering grass roots opinions has also been important for the recipient of the Campos 2016 Lifetime Achievement Award, Nacianceno Mejos Pacalioga, Mayor of Dumingag Municipality, Zamboanga del Sur, in The Philippines.  He was recognized as a pioneering public servant whose leadership style has been characterized by dialogue, inclusive partnerships, results-based programs, and responsive governance.

Pacalioga said he often went out to communities to talk to people and even stay there in an effort to communicate the goals of his government as well as to understand how to solve their problems.

In the last 12 years, poverty in his municipality has dropped from 92% to 42.8% today, and it continues to fall, said Pacalioga. He served as Mayor for the maximum nine years and is now Vice-Mayor of the city of 52,000, as well as a farmer of organic rice, vegetables and livestock.

“My advice is know the situation of your locality and understand deeper the emerging problem, and serve the people with conscience and heart,” said Pacalioga.

“Once you have an objective you have to achieve, you have to compromise in terms of defining the common ground with people,” said Sahraoui. “Build coalitions, do the right things – integrity, transparency.”

To build his network, he chose people who could have an impact, managed egos, and launched an e-training market across the region, providing both the technology and the content.  “Basically, we harness resources across the network and put them at the disposal of people,” he said.

“We are also pushing an agenda – which is nurturing constructive leadership so that later on people take up positions and do for their countries what we believe they should be doing,” he said.

Innovation and vision are other critical characteristics of successful collaborative leadership. Sir Fazle Abed, Founder and Chairman of BRAC, Bangladesh, and the South Asia winner, was hailed for his visionary outlook on helping the poor help themselves.  BRAC’s innovative use of microfinance, among other interventions, is credited with lifting millions of poor families out of poverty.

The wisdom of these five leaders is food for thought as the Global Partnership, its supporter, the Collaborative Leadership for Development Program, and the World Bank seek the best ways to achieve inclusive development.

“For policies to be effective, we need to guarantee credible commitment, support coordination, and promote cooperation, and that’s what collaborative leadership is all about,” said Jan Walliser, the World Bank’s Vice President, Equitable Growth, Finance, and Institutions.