Seeing the impact of forest fires in South Sumatra: a view from the field 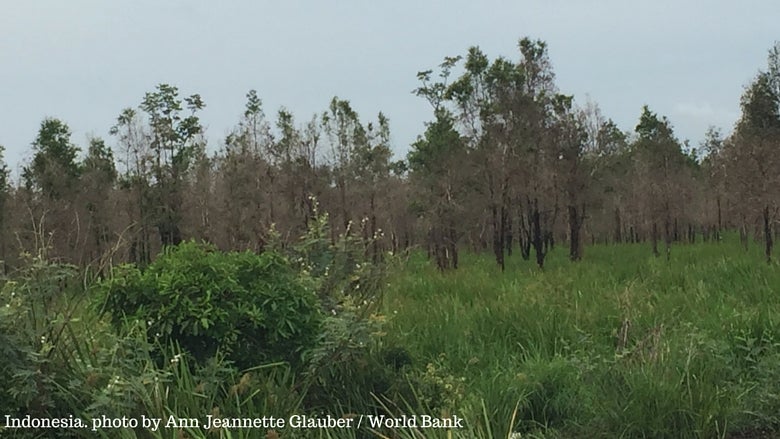 This past autumn, I saw a shocking headline: Forest fires in Indonesia were creating as many greenhouse gas emissions as the entire United States economy.

Recently, along with Vice President for Sustainable Development Laura Tuck and Indonesia Country Director Rodrigo Chaves, I visited South Sumatra, one of the provinces hardest hit by the fires.

We spoke with local communities who explained how they covered doors and windows with wet towels, to help reduce the smoke.  These families are among the half million people who suffered from fire-related respiratory infections, skin and eye ailments; their children were among the 4.6 million students who missed school last year due to fires, some for weeks at a time.

While some of these families lost earnings or assets due to the fires, others spoke of how fire improves soil quality.

Indeed, the fires are not without beneficiaries - but they are relatively few. Demand for palm oil is high. Half of global palm oil production is in Indonesia, 75 percent for exports.

Clearing of peatlands promises quick returns: $3000 per hectare after three years after planting oil palm. At this rate, last year’s fires would generate $8 billion. But the communities living in and around forests, where poverty rates can be double the national average, see few benefits.

Production on peatlands contributes less than 1% to Indonesia’s economy. But weak enforcement of existing restrictions to curb peatlands development has led to continued burning. Peatland fires last longer, are harder to put out, and emit much more emissions than fires on other soil types.

A World Bank analysis, found that fires across more than 10,000 square miles cost Indonesia $16.1 billion in 2015, equivalent to 1.9% of GDP.
This $16 billion is more than the value of palm oil production in Indonesia in 2014, and double the cost of rebuilding Aceh province after the 2004 tsunami.

At one spot along South Sumatra’s Musa River, we saw the challenges of sustainable land management in Indonesia’s lowlands: a national park half of which burned last year, thousands of hectares of oil palm and pulp plantations, and a new pulp mill – nearly completed -- that will be the world’s largest.

Many have called for a complete fire ban. Their argument is simple.  Existing regulations allow burning by farmers with less than two hectares of land, and such fires can spread out of control, or be blamed as the cause of fires set less scrupulously.

Where does that leave the smallholders, who say fires are the cheapest form of land clearing? Is there a less damaging way to support smallholder farmers? Such an approach can include fire restrictions at certain times and in certain places, as well as alternative land clearing methods and restrictions on clearing in sensitive areas.

This support for smallholders can be complemented by the Government’s actions to restore development of peatlands – a key step in the right direction. Further action must be equally decisive: improve fire management; strengthen land information through the One Map initiative; and manage and restore Indonesia’s peatlands and lowland landscapes.

Why focus on fires? Because Indonesia’s fire management is currently focused on suppression, even though studies show that $1 spent on fire prevention saves $30 in suppression.  Investments should focus on risks from weather, fuel (such as peat or woody debris) or social conflicts, which require improvements in tracking and response systems, and instating mechanisms that quickly provide and deliver equipment and resources. In South Sumatra, some fire hoses reached only a few hundred meters. This is not sufficient.

The next priority is to create One Map, which would compile land information across Indonesia into a single window. Without clear agreed boundaries and a single registry for public lands, land and fire management is impossible.  One Map would also help address land tenure insecurity, a key contributor to land degradation and fires.

Requiring data collection from many agencies, agreements on data sharing, and data validation, creating One Map will be challenging. Inter-agency coordination – so far elusive in Indonesia – will be vital.

The third urgent action concerns protecting peatlands, and the new Peatland Restoration Agency is encouraging.  But restoring 2 million hectares of peatlands in 5 years will require strong support from the Ministry of Public Works and other counterparts.  In the past, lowland development has been uncoordinated.  Can Indonesia simultaneously promote intensified development in some lowland areas, while improving water and land management in peatland areas and protecting the remaining intact peat swamp forests?

Landscape management is long-term, expensive, and ambitious.  Success needs structural reorganization, involving, among others, assigning institutional authority and role-sharing arrangements, identifying priority “deep peat” areas and reclassification of land-use and zoning.  Financing and fiscal mechanisms for the various initiatives must also be secured.

Can and will these investments be made?  Can Indonesia build thriving economies in the lowlands while simultaneously protecting its natural resources?
Topics
Climate Change
Disaster Risk Management
Environment
Poverty
Countries
Indonesia
Regions
East Asia and Pacific Illuminating a complicated issue, Thanks AJ

Indonesia has a great champion

Brilliant, incisive and frightening. How about expanding it to an article called "Pulp Non-Fiction".