Tackling the global profitarchy: Gender and the choice of business sector

Take a look at the U.S. holiday calendar and you will find several days marked to observe “Equal Pay Day” over the year. These symbolic days attempt to raise public awareness of the persistent gender and race pay gaps in the country. Despite significant progress in women’s educational attainment and higher female labor force participation rates in many countries, progress in closing the gender pay gap, which takes the ratio of median earnings of all women to all men, has been slow. While there are a multitude of factors at play when it comes to the gender earnings gap in entrepreneurship, sectoral segregation has been identified as an important determinant.  Women tend to sort into different sectors than men, and the traditionally female sectors are characterized by lower returns. So, do women earn higher returns in sectors traditionally characterized as male? Can we learn anything from the female entrepreneurs who have successfully circumvented some of the challenges and entered higher-return male-dominated sectors? How large are the gaps in earnings when we account for differences in sectors across the world?

In a new paper “Tackling the Global Profitarchy: Gender and the Choice of Business Sector” we set out to answer these questions on a global level. The paper uses data from the Facebook administered Future of Business survey spanning 97 countries on 55,932 female and male enterprises operating in sectors that are typically dominated by the same or opposite sex. 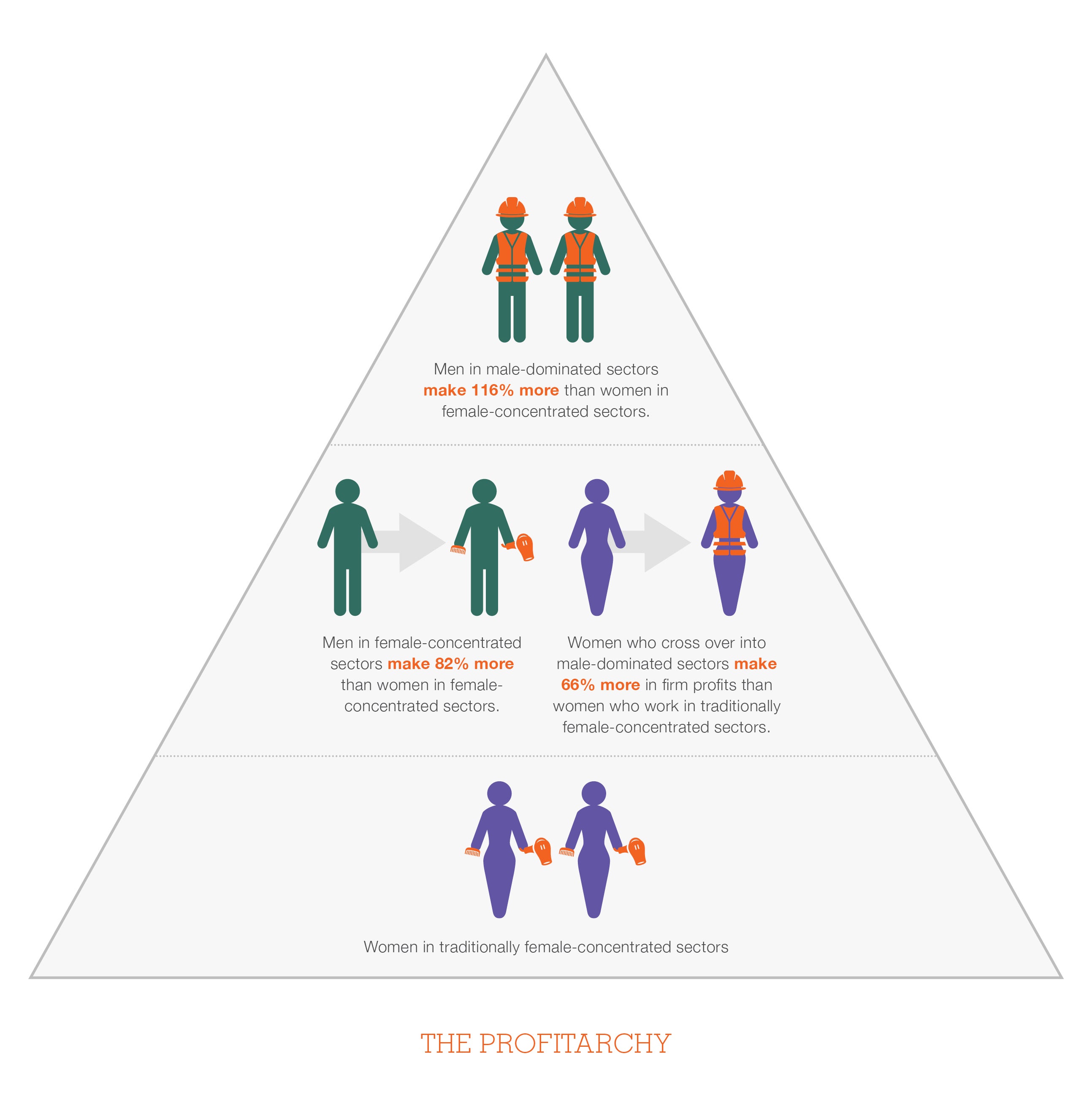 How did we study this?

Facebook, in partnership with the World Bank and the Organization for Economic Co-Operation and Development (OECD), designed and conducted the bi-annual Future of Business survey which offers a survey to global micro, small and medium sized enterprises (MSMEs) that have an active Facebook business page. The paper utilizes the latest wave of the data (December 2018) from the survey, gathered from business owners, managers and employees in 97 countries, across 4 continents offering an extensive level of geographic coverage. This large dataset provides a unique opportunity to study the gender earnings gap on a global level. 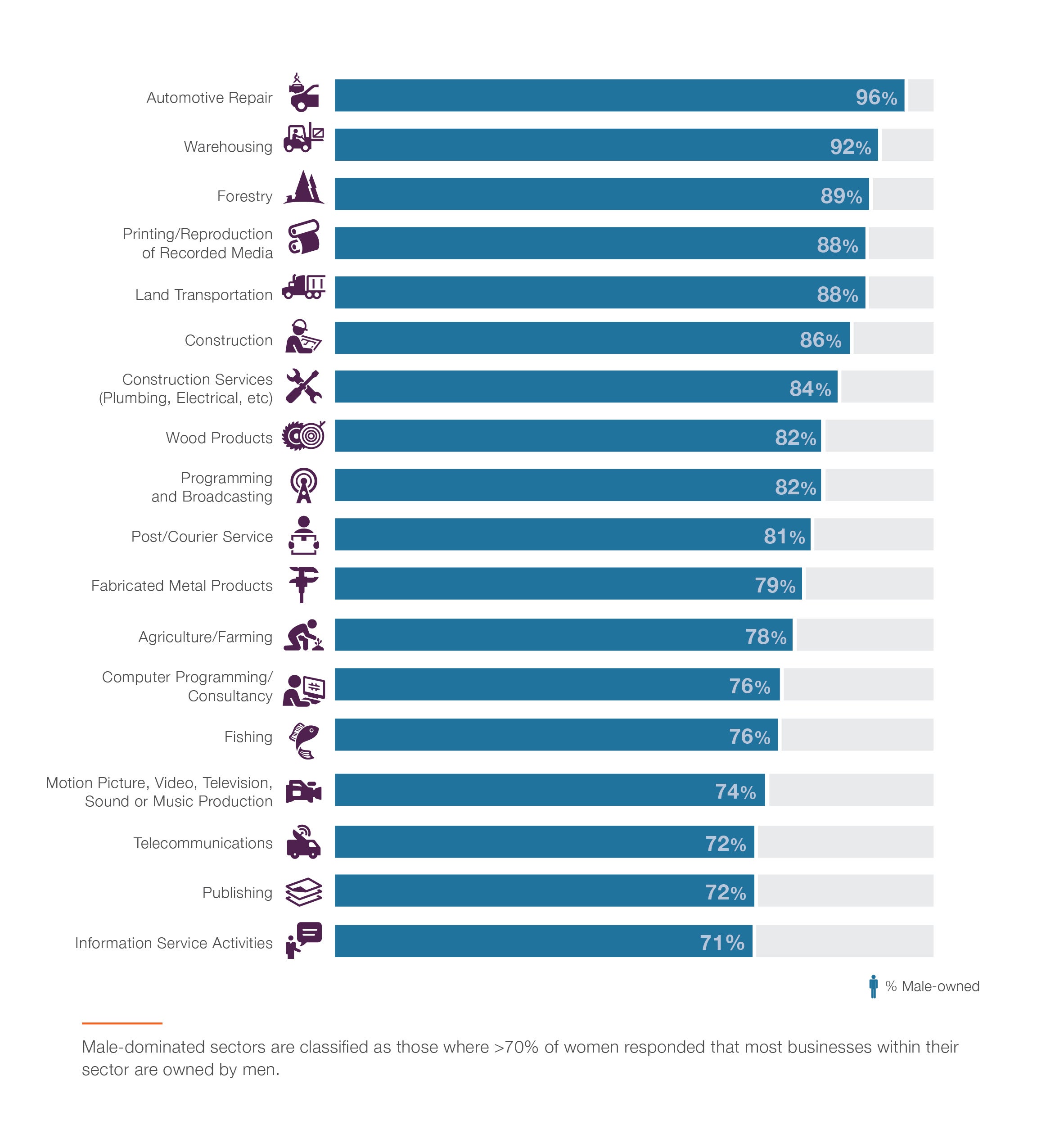 In many countries, female-owned businesses are concentrated in retail trade and services sectors  (mainly health, education, and social services), which are characterized by lower investment and growth compared to manufacturing, construction and mining sectors (Rosa and Sylla, 2016). The digital revolution may exacerbate the divide with a gender gap in participation being most pronounced in the information and communications technology (ICT) sector (Kelley et al. 2016).

So, who crosses over into male-dominated sectors?

Male support networks appear to be key for female-owned firms, with male role models and co-ownership with husbands factoring into the decision to cross over.  Support from the husband helped women break into these male-dominated sectors if it was multifaceted (e.g. providing  finance, moral support and help with business registration). Women in male-dominated sectors do appear to work more hours per week and have a lower share of female employees relative to female-owned firms in female-concentrated sectors.

Identifying the characteristics of women that have successfully entered higher-return male-dominated sectors will help us to develop policy interventions that enable women to build businesses that could positively affect growth while reducing gender earning gaps. Indeed, work from the U.S. has shown that reducing racial and gender occupational segregation in the US accounted for 40 percent of the growth in market GDP per person from 1960 to 2010  (Hsieh et. al. 2019).