Trafficking wildlife and transmitting disease: Bold threats in an era of Ebola 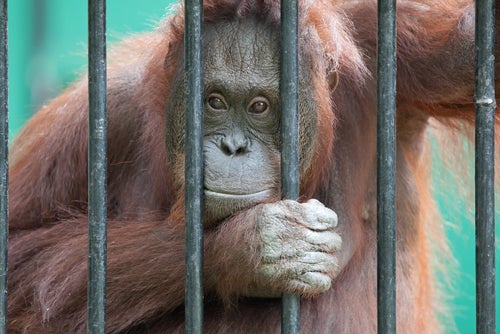 
​The Ebola epidemic in Guinea, Liberia and Sierra Leone continues to spread despite country and international efforts to stop it in its tracks and make sure it never returns.  As of October 1, 3,338 people have died and 7,178 are infected. More people have perished in this latest Ebola outbreak than in all previous outbreaks of the virus on the continent combined. In addition to the large number of people who have died, and the steady march of new infections, the three hardest-hit countries are also suffering heavy economic costs from trade and travel restrictions, food being in short supply, and other impacts.  While health workers, international health agencies and charities work furiously to contain the outbreak, we must also think ahead so that we might avoid similar epidemics in the future. What might the first step be? Better understanding the animal origins of Ebola and other infectious diseases so that we can prevent an epidemic like this from ever happening again.

Ebola is a zoonotic disease, meaning that it is transmitted from animals to humans. In past outbreaks, this has occurred during the handling of wildlife – bats, gorillas, chimpanzees, monkeys, even porcupines. The running hypothesis for this outbreak is that it came from bats, though an early focus of consideration was on primates trafficked through capital cities. Regardless of the precise path of transmission, it is clear that we must examine human relationships with wildlife to ensure we protect against this and other future disease risks.

On one hand, humans embrace our relationship with the wild, advocating for greater protection of natural spaces and species. On another, we exploit it, in sometimes careless and unsustainable ways. As human populations grow, new arcs of deforestation and degradation open and the climate changes, we enable new wildlife interactions near dense (human) population centers in warm, humid climates, already ripe for disease transmission. Worse yet is that outbreaks are not limited only to those geographies close to wildlife hotspots. International travel and trade mean that these diseases can be exported as easily as any commodity in a shipping crate. In many instances there are measures in place to protect against this, such as regulations of what can be transported abroad coupled with airport and shipyard screenings. Yet, there is much which flies under the radar of these precautions – none of which may pose a more serious threat than wildlife trafficking.

Globally, the illegal wildlife trade market accounts for some $10-20 billion annually, comprising both live and dead species.   In Central Africa, the market estimate for wild animal meat is greater than one billion kilograms per year.  As wildlife is traded between hunters, middle marketers, and consumers, there are, quite literally, billions of opportunities for disease transmission among wildlife, humans, and domestic animals each year. At the global level, wildlife trafficking is perpetrated by organized criminal networks which illicitly transit wildlife and animal products from country to country. As it is transported, often through densely populated and heavily trafficked cities, countless opportunities for disease transmission occur. In addition to disease risks, wildlife trafficking can also threaten livestock, rural livelihoods, native wildlife populations, and ecosystem health, further imperiling those communities most near the human-animal interface.

The World Bank commits $60 million per year to combat wildlife crime to include projects addressing illegal logging, illegal, unreported, and unregulated (IUU) fishing, elephant poaching, and others. Collectively through our natural resource management, economic, trade facilitation, anti-money laundering, legal, judiciary, and governance expertise, we can play a significant role in combatting wildlife crime.  We have also published a roadmap to promote and achieve compliance to mitigate risks from ill-conceived or misdirected enforcement efforts and separately, participate in the International Consortium on Combatting Wildlife Crime (ICCWC)--with UNODC, Interpol, the CITES Secretariat and WCO. Through these efforts we believe we can better understand and overcome the problems surrounding wildlife crime, which can have rippling effects on the global community.

Though ongoing, the Ebola crisis is helping us better understand our inadequacies in public health and environmental management, and the absolute necessity of better linking the two. Wildlife trafficking is merely but one issue that links environmental sustainability to human health and well-being. If we are to collectively address these issues in the future, we must seize upon the opportunity now to raise the profile of these conversations so that they may be incorporated into general practice and action moving forward. Great article. I certainly agree that enforcing restrictions on illegal wildlife trade would benefit the dwindling populations of endangered animals and potentially drive down disease transmission. Thank you for your contribution.

Why are you illustrating this excellent article with a picture of an orangutan (from Indonesia or Malaysia)? This virus can kill the African great apes -- chimpanzees, gorillas, and bonobos. A picture of one of these apes would better assure readers that the World Bank understood the problem the author is describing.