The biggest bang for our limited water and sanitation buck: can investing in small towns lead the way? 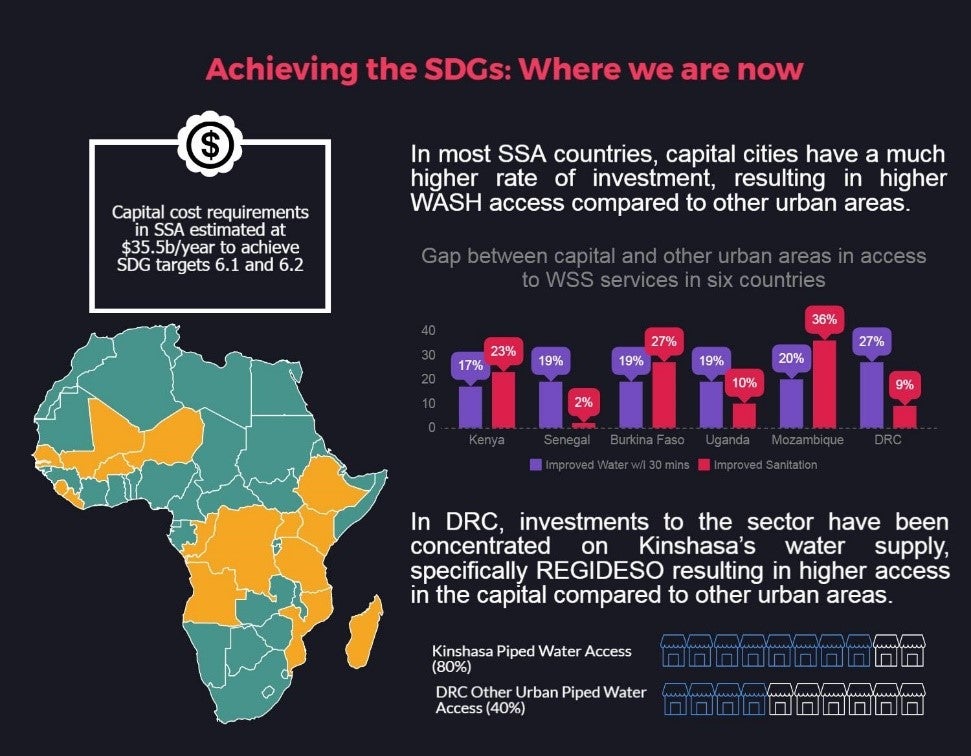 While the share of poor people in Sub-Saharan Africa decreased from 56 percent in 1990 to 43 percent in 2012, the region’s rapid population growth outpaced the decrease in poverty, resulting in higher number of poor people than before. More specifically, Africa’s urban population is expected to triple in size in the next half century, which is putting pressure on scarce resources in cities, exacerbated by capacity, budget and governance bottlenecks. The densely-populated areas with low levels of water and sanitation services pose a serious threat to public health – cholera epidemics have broken out in urban areas in several African countries in recent years.

The goals of ending poverty and delivering shared prosperity mean that “frontline” countries – those with the largest deprivations – must be at the center of expanding service delivery. The Democratic Republic of the Congo, with the third highest poverty rate in the world, the fifth largest number of poor people within its borders, and having experienced protracted fragility for decades, is one such country. Access to both improved water and sanitation has risen by barely three percentage points since the first democratic elections in 2006, and it missed the 2015 Millennium Development Goals (MDGs) for water supply, sanitation and hygiene (WASH). In fact, less than half of the 51 countries in sub-Saharan Africa (SSA) met the MDG targets on access to improved water, and only three countries – all island nations - met targets for improved sanitation.

Achieving the new, even more ambitious SDG targets when the MDGs were only partially met will require, among other things, massive capital investments. The DRC alone will need approximately US$8 billion to provide basic sanitation (specifically, latrine with septic tank) to its urban population.

In most countries in SSA, the capital has a much higher rate of investment and thereby, greater access to services than peripheral urban areas. For example, in the DRC, investments in the sector have flowed to Kinshasa’s water supply, in particular the utility REGIDESO, which has led to higher levels of piped water in the city compared to other urban areas.

While IDA18 puts a renewed focus to finance projects in Sub-Saharan Africa, investment cost requirements (estimated at US$ 35.5 billion per year) far exceed available public financing. Ensuring increasing access to water and sanitation implies that limited investments must be directed to areas with the greatest bang for the buck. Recognizing that not all areas can be improved at the same time, the results of the WASH Poverty Diagnostics supports countries to make evidence-based decisions about where to target their scarce resources.
Investments in basic improved sanitation in rapidly growing cities is critical to addressing and planning for public health risks. Another area of urgent action is water quality, a key component in measuring safely managed drinking water under the SDGs. For example, in DRC, E. coli contamination is common across improved sources even in Kinshasa. Contaminated water caused by fecal pollution causes a myriad of negative health outcomes including child malnutrition and stunting.

The continuous migration from rural areas to urban periphery makes it imperative to redirect investments to secondary cities to ensure that these areas do not turn into low development traps. The WASH Poverty Diagnostics analysis provides countries with the tools to highlight areas where this investment is most needed to help them put their effort where it matters most.
Topics
Agriculture and Food
Urban Development
Water
Countries
Congo, Democratic Republic of
Regions
Africa