Container-based sanitation: one way to reach the last mile for sanitation services

Cities are growing at unprecedented rates, with over two thirds of the world population projected to live in urban areas by 2050 (UN DESA 2018), and city governments struggle to keep up with the increasing demand for urban services, including sanitation. This unplanned growth and the resulting dense informal housing hinder the provision of such services.  Burgeoning informal settlements are characterized by poor political representation and challenging physical and topographical conditions, such as inaccessibility, rocky soil, high water tables and periodic flooding, which make the provision of basic services especially difficult. Cities require sanitation approaches for such settings which can complement, or precede the arrival of, traditional sewers and conventional on-site solutions, and thus contribute to the realization of the sanitation-related Sustainable Development Goals (SDGs). This thinking underpins the core principles of Citywide Inclusive Sanitation (CWIS) – encouraging cities to think about a diversity of technical solutions that provide services along the whole sanitation service chain, combining different approaches to better respond to the challenging realities faced by cities.

Container-based sanitation (CBS) is one of the ways that such services can be provided. CBS consists of an end-to-end service – i.e. one provided along the entire sanitation service chain – which collects excreta hygienically from toilets designed with sealable, removable containers and which strives to ensure that the excreta is safely treated and disposed of or reused. For cities, this has major implications as it can help them shift their focus from exclusively building sanitation infrastructure to that of service delivery. 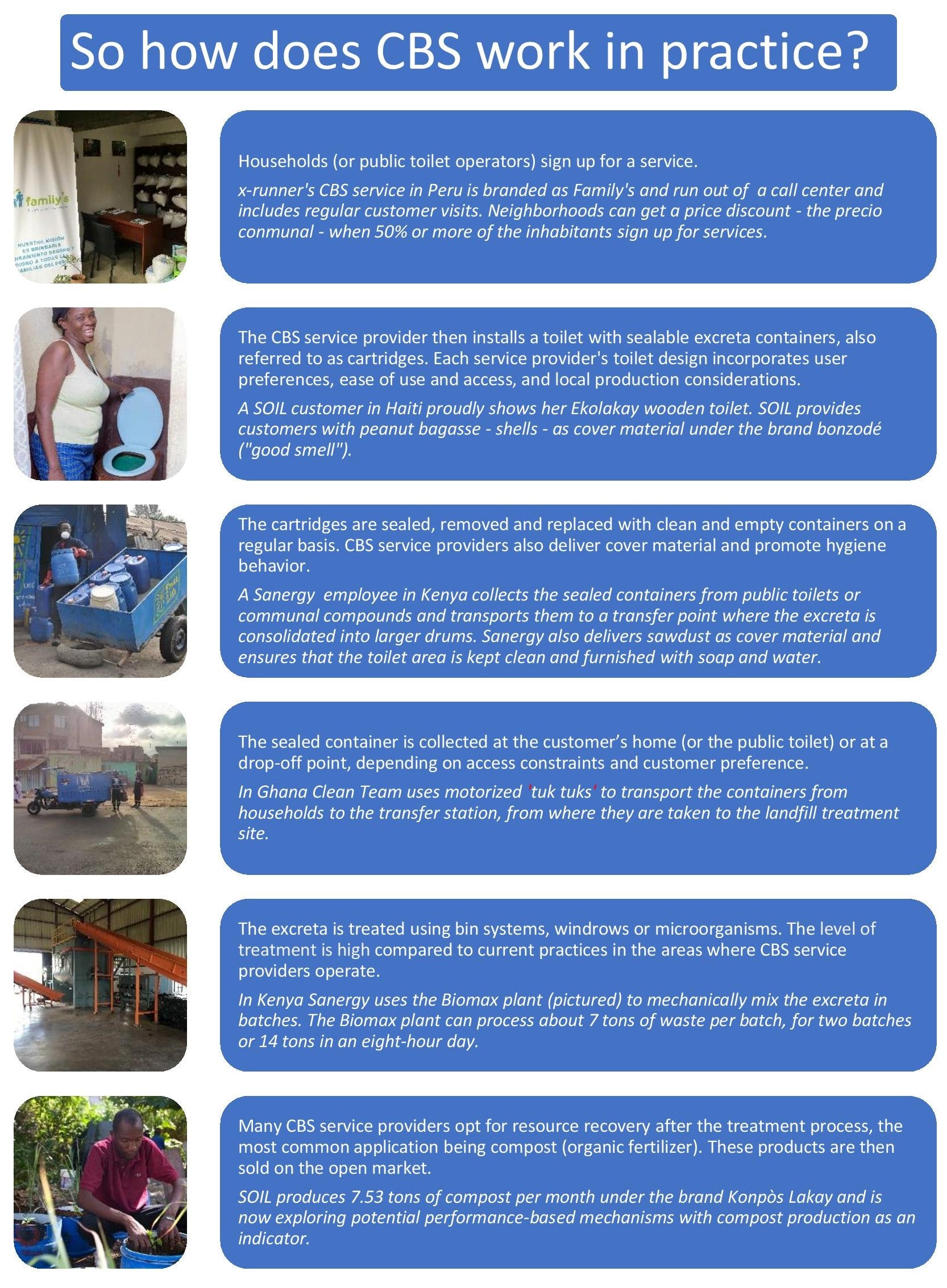 Where is CBS appropriate?

Based on a review of four CBS service providers, the World Bank has identified the following emerging lessons:

CBS service providers have found a way to address the whole sanitation service chain. As the service providers continue to grow and adapt their activities, we have identified some opportunities for continued research: To learn more about the safety, reliability, affordability and financial viability of CBS services, take a look at the main report. If you want to read specifically about the work of SOIL in Cap-Haitien, Haiti; Sanergy in Nairobi, Kenya; x-runner in Lima, Peru; or Clean Team in Kumasi, Ghana, you can consult the case studies that the report drew on. Felicitations for evaluating the CBS as an excellent alternative for the provision of sanitation services, especially for people living in high density low-income urban areas. There are still significant challenges to overcome such as: existing policies and regulations, in some cases; the lack of them in others; attaining efficient and hygienic operation of the systems; appropriate disposal; financial sustainability; etc. However, studies of this nature will facilitate policy dialogue with government officials and the dissemination and replication of best practices.

Very good solution with this CBS approach. I would like to implement it here in my country (Benin-West Africa).
The problem remains financing in such countries.