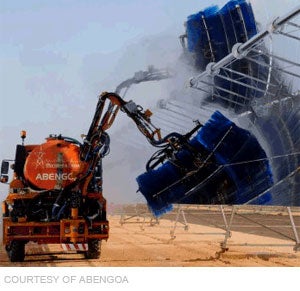 Concentrated solar power (CSP) systems are a great promise for renewable energy at scale.  But they can use a lot of water, which is a problem since they tend to be located in places where water is scarce. Some concentrated solar technologies need to withdraw as much as 3,500 liters per Megawatt hour (MWh) generated. This compares to 2,000 liters/MWh for new coal-fired power plants and 1,000 liters/MWh for more efficient natural gas combined cycle power plants.

CSP are thermal power plants and most of them generate power by creating steam to turn the turbines, just as coal power plants do. The main difference is that CSP plants use energy from the sun as their fuel source instead of coal or gas. The mirrors reflect the sun and concentrate it in one place (absorber tubes in parabolic trough technology and central receiver in tower technology). The sun’s energy heats the water and converts it into steam. Once the steam has done its job (turning the turbines to produce electricity), it has to be cooled down to be condensed into water and be able to start the cycle again (closing the so-called steam cycle).  Most of the cooling systems used around the world use water as the heat transfer medium and this is where most of the water consumption comes from.

Although CSP still produces intermittent power (depending on whether the sun is shining or not) companies are increasingly developing methods to use the steam to store the excess power generated on sunny days. Moreover, developers of concentrated solar technology are finding ways to cut water consumption by up to 90%.

In Southern Spain, I visited one such plant.  Here the mirrors point up at a tower, concentrating the solar energy. Water is pumped up the tower and is heated to 280-540 Celsius degrees producing steam to turn the turbines. On sunny days, the plant generates more energy than it can sell to the grid. So it is designed to produce energy at night with the steam stored in pressurized tanks on the ground and released when the sun is not shining. The company is also testing another tower where they store the surplus energy using molten salt, which is more efficient. Moreover, they are investing in alternative cooling systems, such as dry cooling and hybrid wet/dry cooling, which reduces water requirements to 35-40 liters per MWh.

In the latest test plants in Spain, another important water consumption of the plant is for washing the mirrors (see picture).  A small truck equipped with an arm of soft brushes like those used at commercial car washes trundles around the plant cleaning dust off the mirrors. And even that water consumption is beginning to drop.  The company is experimenting with land management options that will cut the dust and therefore cleaning will be less frequent.

Special thanks to Pol Adarve of Abeinsa and Anna Delgado Martin of World Bank for their contributions to this blog.
Topics
Energy
Water