Forging a path to progress for Haiti's water and sanitation


In Haiti, lack of access to quality water and sanitation has hit the population severely, with the poorest citizens suffering the most. Between 1990 and 2015, the share of the population with access to potable water decreased from 62% to 52%. Sanitation is also a critical issue; over the same period, access to enhanced sanitation installations only increased by 1% among the poorest in the rural areas. Among the urban poor, it actually declined by 3%.

While the lack of clean water and sanitation has been a major problem in Haiti for years, the situation became dire in 2010 after a massive earthquake destroyed many of the existing sanitation systems.  As the poorest nation in the western hemisphere, Haiti is extremely vulnerable to natural hazards, with more than 90% of the population at risk. Almost 60% of Haitians live below the poverty line of $2.41 a day, and millions struggle to find clean drinking water.

The water and sanitation sector, however, now has solid means to achieve progress thanks to a close collaboration with the Government and to the efforts of the Direction nationale de l’eau potable et de l’assainissement (DINEPA): Tools have been designed to assess the situation, to map the available resources, and to address the challenges of the water and sanitation sector with a clear roadmap.

On January 29, a one-day workshop was organized by the World Bank in Port-au-Prince to present the findings of the latest studies focusing on the water and sanitation sectors and funded by the Bank and the DINEPA. After several years of dialogue and partnership between the Haitian Government and the donors’ community, this day of exchanges allowed stakeholders to take stock of the work accomplished so far. 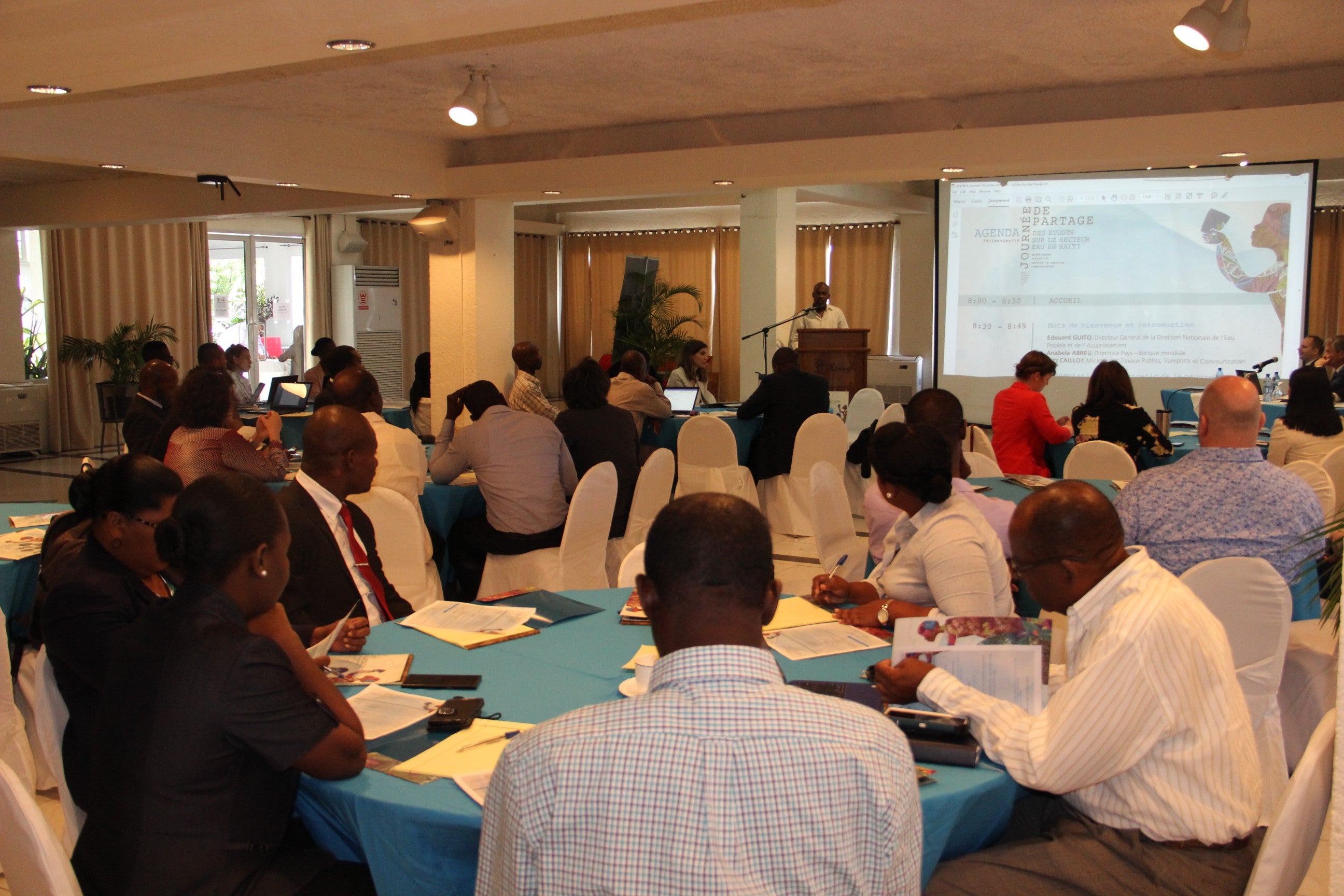 The World Bank’s WASH Poverty Diagnostic in Haiti was among the key studies presented at the workshop, and showed that, despite limited fiscal resources, socioeconomic progress can be achieved. The study demonstrates the existence of a direct link between enhancing access to water and sanitation and improved growth among children.

Improving access to those services can contribute significantly to reduce poverty and vulnerability among the Haitian population, especially in rural areas. The Bank’s Diagnostic also analyzes the functioning of water and sanitation markets, examining the specific case of Port-au-Prince, where the provision of water by the private sector grew from 25% to 50% in six years.

Public-private partnerships were the focus of a session led by the International Finance Corporation, which offered a breakdown of the ways that PPPs can help performance or develop new sources in Haiti.  Some of the more recent trends in PPPs were discussed, including performance-based contracting, with payments against outputs, as well as the utilization of small-scale private operators and more customized approaches to PPP design.

An inventory of water infrastructure functionality in Haiti’s South and Center regions based on geographic information system (GIS), and a report and studies-based groundwater resources assessment presented during other sessions, offered a clear and precise understanding of the existing disparities in access to quality, drinkable water and of the available resources to ensure a better future for the population. Similarly, the rolling multiannual programming and budgeting process (BPO) was designed to strengthen the DINEPA’s ability to plan, program, monitor, and budget water and sanitation interventions in rural areas and small towns in a more equitable way to meet the SDG6.

Throughout the workshop, numerous stakeholders, including mayors, technical professional operators, members of community-based organizations and officials from local water committees, all shared their own experiences and feedback.  Each session was followed by spirited debate and knowledge-sharing, with the common goal of addressing Haiti’s water and sanitation crisis.  With continued dialogue, clear goals, and adequate support, sustainable solutions can be put in place to provide Haitians the clean water they need to live and thrive. The country has suffered far too long and it’s time for a path to progress.

For more details about the workshop, you can view the complete agenda and all the slideshows that were presented at the sessions.  (Please note that all the materials are in French.) Thank you for this blog. It is sad, but it is helpful. I am an environmentalist who work on Quality water and sanitation improvement through the families need in the rural areas