An Introduction to Shared Sanitation

How many people can share a toilet? This question might sound like the start of a joke but it’s actually a serious issue for many across the world. That’s because an estimated 20 percent of the global population do not have their own toilets.

In urban areas, almost one person in ten uses a shared household toilet, i.e., a toilet shared with at least one neighboring household. But sometimes no one in the neighborhood owns a private toilet, so some of these families instead have no choice but to use community toilets - that are locally available and used by anyone who lives nearby. In such cases, hundreds of people might be using the same block of community toilets. Now let’s think about the other toilets we all use – when we’re out shopping or running errands, when we’re at work or school, or when we’re in transit. These public toilets might be used by hundreds or thousands of different people at different times of day.

Many of us go through the day without giving much thought to this. But for hundreds of millions of people worldwide who do not own their own toilet, these are daily realities. Additionally, even for households who have their own toilet, when they are outside of the home, they still need access to improved sanitation facilities. The illustration below depicts a day in the life of the Mijini family (Mijini means urban in Swahili). The Mijini ’s sanitation situation is great in their home, as they have an individual household toilet, but it’s underwhelming and even dangerous once they leave home for their day. Their experience is not unique, particularly in low- and middle-income countries. 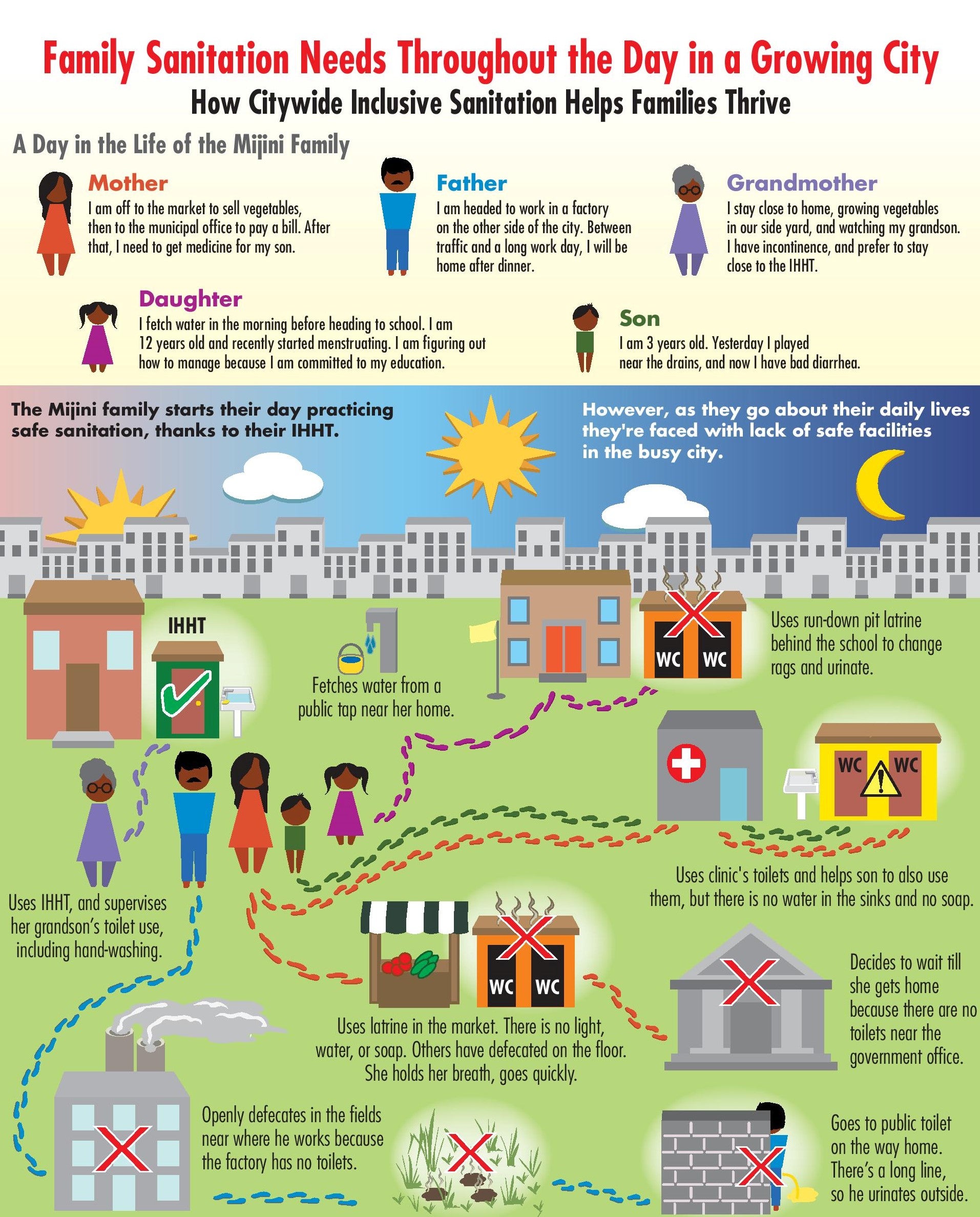 Access to safe, clean sanitation facilities throughout the day is important as safely managed sanitation helps protect both human health and the environment. Although there has been impressive progress in recent years, under Sustainable Development Goal 6.2, the challenge will only increase, as we work towards safely managed sanitation for all – which considers not only containment of waste at households, but also the safe conveyance, treatment and end use/disposal of the waste.

In practice, there are many barriers that prevent those aspirations being met. There may be challenging geographical terrains to navigate, or population density that presents insurmountable complexities for bringing in sanitation to– and allowing waste to be brought out from – individual households in the near term. Land tenure is a common challenge; as is whether residents or businesses/institutions own their buildings or rent them. While everyone agrees that the sanitation service chain needs to be complete in urban environments, how this is achieved in each location will vary. That’s because such processes depend on compromises between what’s technically, politically, and financially possible, and the views of households and potential consumers about what they need and want – a balance that should be struck through an inclusive engagement process.

Additionally, both anecdotal and empirical evidence suggest that most shared and public toilets fail within a few years of installation. For the most part they fail because of (often) predictable problems associated with ongoing operations and maintenance. That’s largely because, even though maintaining existing sanitation facilities attract less attention than announcing new builds or new initiatives, it is incredibly important. It’s much more cost-effective to fix existing facilities than build new ones. And maintenance matters because by its very nature it means working on things that are already being frequently used.

To help start addressing the issue of failed management of shared facilities, the Bank, as part of its work on Citywide Inclusive Sanitation, has drawn on a range of global experiences with shared household, community and public toilets and developed a guide entitled Shared and Public Toilets: Championing Delivery Models That Work. With a series of tips, case studies, and flow charts, the guide walks readers through the different decisions that need to be made when designing and implementing the full range of shared sanitation options considering user, service provider and service authority perspectives.

While individual household sanitation is both crucial and aspirational, it will be insufficient to meet the needs of growing urban populations in the coming years. And our sector’s predominant focus on individual sanitation, as seen by what gets prioritized in investment programs, and how ‘success’ gets counted – does a disservice to the millions of children, women and men living in urban areas, who will not be able to access a toilet at home in the short term and who spend much of their days away from their households, all too often without clean sanitation facilities they can safely use. And that’s no joke.

We’re also co-convening a session at the forthcoming SIWI World Water Week on Shared Sanitation: when individual toilets are not enough. Check back in September to learn more about the sessions and find out what new ideas the group generates for ensuring good operation and maintenance and increasing inclusivity of shared sanitation facilities. 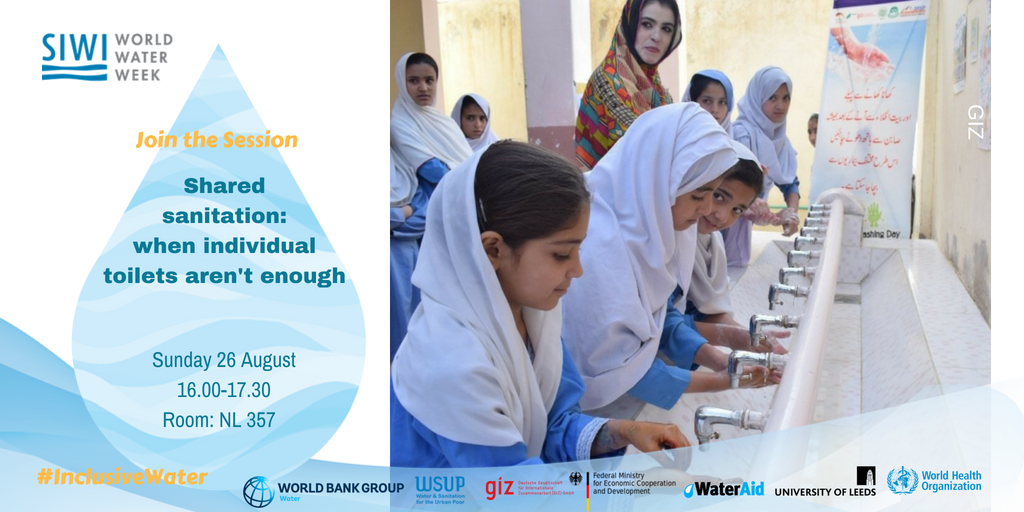 To learn more about Shared Sanitation and what the World Bank is doing on this important topic, check out: Miniji does not mean urban in Kiswahili. You are probably aiming for "mjini" which means "in the city" - mji is city.

This is also the case for the IRIE- projects in the Soith of Cameroon. How can we find help to realise toilets and showers for the children of the school Les Lionceaux?
Thx for an answer,
Myriam

Good paper; in some sense, underscoring the point that 100% household toilet coverage alone is just not adequate. There is a need to provide access to shared toilets in order to ensure 100% ODF.
regards

The Kite Runner is the first novel by Afghan-American author Khaled Hosseini. Published in 2003 by Riverhead Books, it tells the story of Amir. A young boy from the Wazir Akbar Khan district of Kabul, whose closest friend is Hassan. Read More the kite runner play

For health, sanitation, and renewable energy programs and projects implementation I am requesting any individuals and institution to help me in implementing projects for Cooperating Association Servicing Health-care and biogas application towards Renewable Energy conducive for clean cooking and electrification.

Can you do a blog on Sewllkwe Tracking Solutions?