What Does Water Look Like in a 4-Degrees World? 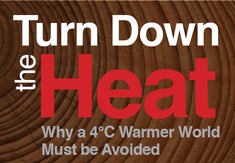 All climate negotiations have been based on staying below 2°C above pre-industrial temperatures. Yet it looks increasingly unlikely that that will be possible. A new report, Turn Down the Heat: Why a 4°C Warmer World Must be Avoided, suggests that there is a 40 percent chance that we will reach 4°C by 2100 even if we stick to the agreed emission reduction commitments.

What does water look like in a 4°C world?

Put simply: it's complex. Water is a complicated system and one of the major impacts of climate change is the effect on the hydrological (water) cycle.  These impacts will coincide with an unprecedented increase in demand for water because of population and economic growth.

The combination of the increased complexities – physical and economic – of the modern world means a certainty that the impacts will be big but uncertainty about what they will be.

When a flood in Bangkok last year led to a profit warning by a global giant like Intel, we see that the effects of climate change on the water cycle will not ONLY be felt locally. Agriculture will be hit both by higher temperatures and by reduced or more uneven water availability. The total “drought disaster-affected” area is predicted to increase from currently 15 percent of global cropland to 38-50 percent by 2100. And water problems will also translate into spread of malarial mosquitos and other water-related diseases.

The report suggests that at 4°C, water stress will increase in areas around the world. People living in deltas – about 500 million people – and people in monsoonal basins – about 1 billion people – are especially vulnerable. This shows the essential unfairness of climate change, the world’s greatest market failure. Poor countries, who contributed least to the problem, will be most affected. And within those countries, poor people will be hit the hardest.

But the effects will not necessarily be gradual; they may be sudden and calamitous. At 4°C, the report concludes that the risk of our reaching certain tipping points in natural systems – the Amazon, the currents of the Atlantic Ocean, coral reefs, monsoons – increases considerably. The impacts of any of those events would be massive, but uncertain. Models cannot capture the effects of changes on this scale. And people can only begin to imagine.

This report, despite its sometimes scary findings, reinforces the need to build additional resilience into all of our water systems. More and more of our clients are realizing that we have to consider the entire water system when planning investments that use or depend on water. More and more we have to plan for uncertainty, and find that combination of actions that leads to disaster in the fewest scenarios.

We also have to increase the number of scenarios we include, even those that may seem outlandish. The findings of this report put these conclusions in bold-faced type. In a warmer world, the water cycle will be impacted seriously. Despite knowing this, and despite the famously ominous water wars that break out in various part of the globe frequently, countries and societies continue to view water as an endless natural resource.

Everything is very open with a precise explanation of the issues.
It was really informative. Your website is extremely helpful.
Thank you for sharing!