“Women in Water” in Pakistan Shows the Way 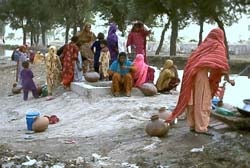 Pakistan’s population of nearly 181 million is growing at 2% per year; this population explosion has resulted in the country meeting the international definition of water stress—water availability in Pakistan has plummeted from about 5,000 cubic meters per capita in the early 1950s to less than 1,100 m3 per capita in 2011.

This ominous, mounting water paucity impairs the lives of Pakistan’s rural women, who bear the arduous responsibility of collecting and providing water for their households. The absence of a safe water supply at or near their homes—and the resulting need to walk up to 4 km or more to get water each day—has aggravated the burden of women’s duties in many ways, making them vulnerable in terms of both their health and personal safety.

Rural women are the worst victims of water scarcity; however, in some communities, evidence indicates that women are emerging as a “herald of change.”

Cases in point: In Pakistan’s Punjab province, women in three communities—Rehmatabad, Yazman, and Ather—have been actively engaged as community organizers, mobilizers, and change managers. The results have been a significant improvement in access to clean drinking water, which has had a dramatic impact on education, health, economics, and women’s empowerment.

The improvement efforts had their roots in the Public Health Engineering Department (PHED), a provincial government department that has a mandate to supply drinking water to rural populations of the province. In the mid ’90s, PHED began institutional reforms to improve service delivery in rural areas by empowering communities. The community development unit (CDU) under the Rural Water Supply project funded by the Asian Development Bank (ADB) initiated social mobilization and active participation—especially of women—in the project cycle. Through this mobilization effort, a group of women leaders emerged in each community who played a very significant role in achieving the project’s initial targets. The department thereby realized that supporting women’s involvement and their leadership role had a significant impact on a community’s success.

As I described here, the Water and Sanitation Program (WSP) —through its newly launched Women in Water Initiative (WiWi)—conducted case studies in Rehmatabad, Yazman, and Ather in Punjab, Pakistan, to document the role of women in RWS planning, decision making, community development, entrepreneurship, and operations and maintenance. Findings from those case studies show dramatic improvements in several key areas, including economics, education, and health.

Prior to the projects, women spent most of their day gathering water. In Rehmatabad, for example, women had to walk 2 to 4 km and wait in line for four hours for their turn to collect water, an effort requiring six to eight hours each day. The installation of domestic water connections in all three communities has eliminated this water collection effort, freeing women to pursue economic and education opportunities.

Following are some examples of the case study findings on the economic and educational impact of increased water access in the three communities.

These studies show that gender mainstreaming has transformed these once-marginalized areas into rapidly progressing Punjab communities with improved literacy, more economic opportunities, and improved health. This progress is not an outcome of overnight efforts, but rather the result of robust endeavors by both PHED and community members.

People have enormous potential to adapt to and thrive under social and economic reforms, which can yield fruitful results for community development projects. This potential in women has been largely untapped in many parts of the world, but efforts such as this prove that supporting women’s involvement can indeed herald deep and meaningful change.

Recognizing Women as a Driving Force in Rural Water Sector And if you have access to clean water then check how much you need for a healthy lifestyle, Zootopia.in