To reduce poverty and boost shared prosperity, Sub-Saharan African countries need to urgently close two critical gaps—the human capital gap and the infrastructure gap. The human capital gap constrains Africa to only 40% of its potential. Africa’s gross domestic product (GDP) per worker could be 2.5 higher if everyone reached the benchmark of complete education and full health. The 2017 Africa Pulse suggests that closing the infrastructure gap would boost growth and increase GDP per capita by as much as 2.6% per annum.

Closing these gaps will require substantial amounts of financial resources. The World Bank estimates that Africa’s infrastructure needs exceed $93 billion per year over the next decade. Even with increased efficiency in spending, the region’s governments would need to generate about $20 billion of fiscal revenues for investment in infrastructure. The World Bank’s push to increase financing for human capital in Africa to $15 billion for the 2021-23 period is an indication of the order of magnitude of the financing gap.

But more borrowing by governments is neither a feasible nor sustainable option for closing such large gaps with Africa’s rising debt (Figure 1) and many countries already at high risk of debt distress. 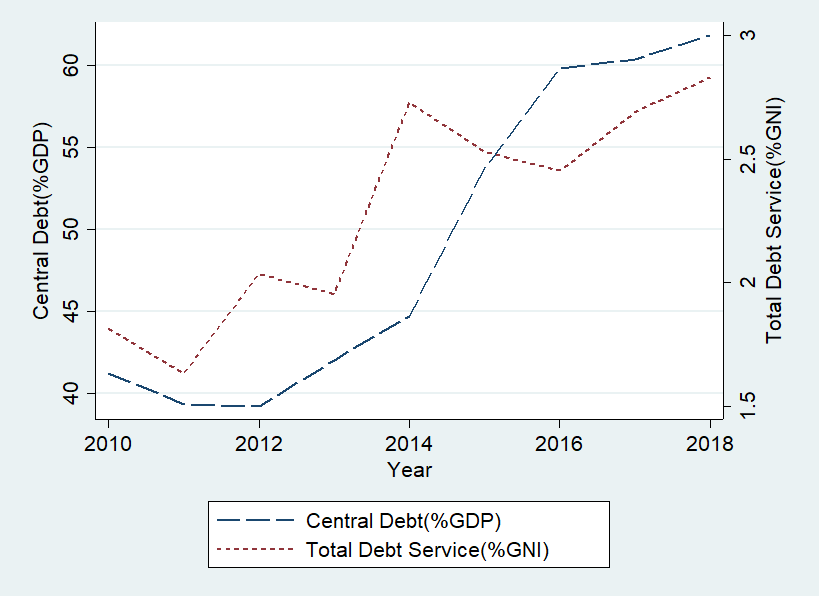 New revenues, raised equitably and spent efficiently, can enhance the lives of citizens by financing better healthcare, schools, sanitation systems and social safety nets for the poorest. Through a combination of legislation, stronger tax administration and more effective taxpayer registration and compliance, Rwanda increased revenues by nearly 50% between 2001 and 2013. This enabled the government to double spending on health from 3.2 to 6.5% of GDP.

The weak link is that domestic revenue mobilization is too low. Tax revenues averaged only 17.2% of GDP in African countries compared with 22.8% in Latina America and Caribbean countries and 34.2% in OECD countries in 2017. Why? African countries are applying a tax system—borrowed from developed countries—ill-suited to African economies where informality is high, and imports consist mainly of the basics such as food and fuel, and therefore difficult to tax.

Informality mutes the efficiency of an ill-adapted tax system

Figure 2: Informal labor in the economy 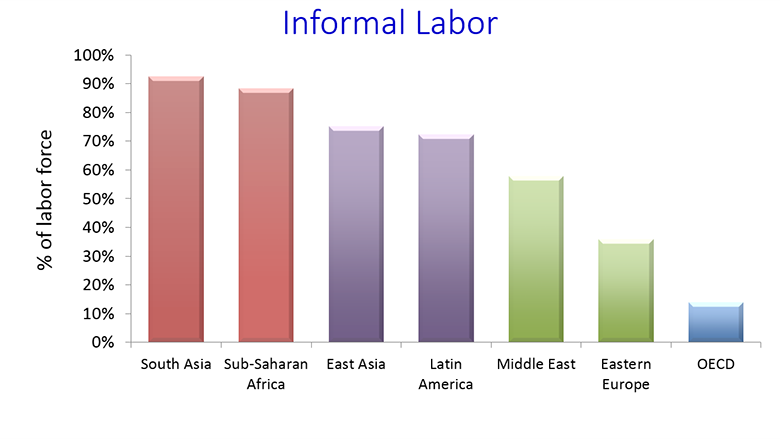 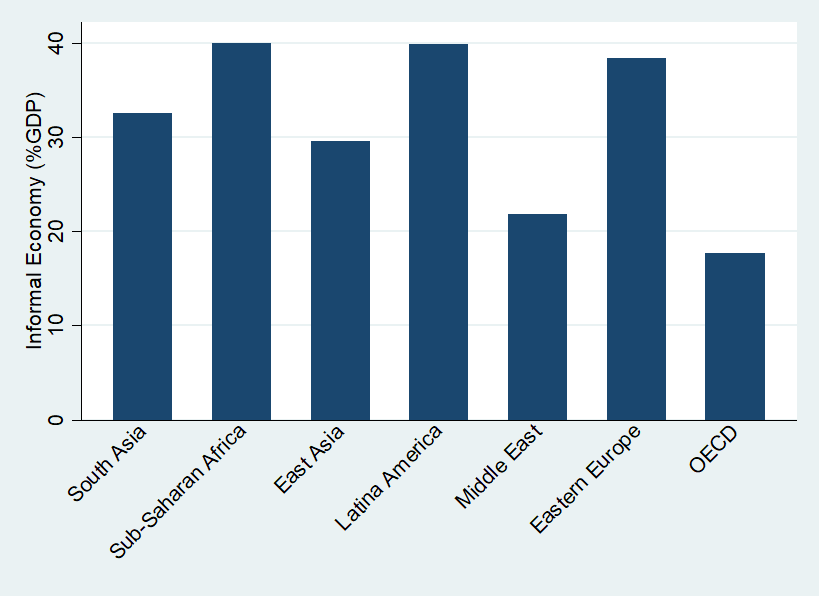 Sub-Saharan Africa needs a home-grown tax system to unleash the potential of its own fiscal resources. Such a system could be built on two pillars:

Recent research suggests the existence of strong non pecuniary drivers of tax compliance, such as tax morale. Trust in governments and institutions significantly impact the willingness of citizens to pay taxes. The low level of tax compliance in Africa stems from the low degree of trust in governments and tax authorities. According to the Afrobarometer 2016 report, tax authorities are the second least trusted institutions in Africa.

A recent World Bank working paper highlights four key dimensions of trust: (i) fairness, (ii) equity, (iii) reciprocity and (iv) accountability. This captures the extent to which: (a) tax systems are fairly and competently designed and administered (“fairness”); (b) burdens are equitably distributed, and everyone pays their share (“equity”); (c) tax revenues are translated into reciprocal publicly provided goods and services (“reciprocity”); and (d) governments administering tax systems are accountable to taxpayers (“accountability”).

The informal sector in Africa covers 90% of the labor force and almost 40% of GDP. In this situation, the traditional tax system is neither efficient nor equitable in the collection of taxes. However, thanks to big data and fintech as well as the high level of mobile penetration, African governments have an opportunity to build their own efficient, equitable and sustainable tax system. There were 456 million unique mobile subscribers in SSA in 2018 and by 2025, the region will receive an additional 167 million subscribers, representing 50% of penetration rate. Governments could, following the example of India, use biometrics to build a consolidated database of potential taxpayers.

The development of mobile banking could facilitate tax collection, lower cost and reduce corruption. More than 395 million mobile accounts have been registered in Sub-Saharan Africa—nearly half of total global mobile money accounts in 2019. In Kenya, the money-transfer system M-Pesa transformed tax policy and administration.

In the face of declining aid flows and rising debt, Africa’s best hope for closing its human capital and infrastructure gaps is to substantially increase domestic resource mobilization. To do so, the region needs to develop its own tax system—one better suited to African economies with their inherent high levels of informality. I'm Ben-Vieira KOUASSI and I'm currently completing a master degree in development economics at CERDI. It was a great pleisure for me to read this blog. It's a passionate topic that deserve to be debated further. If you may allow me, I may have some observations. First, for the figure 2 in respect to Informal labor in the economy, you didn't mentionned the period on which you have these figures. Second, I think that these mesures and policies will have a significant impact on tax collection. However, to set it may have high cost that some countries might not support. So don't you think that African gouvernment shoud first reform the Value Added Tax (which constitue the largest part of fiscal resources) application? And then progressively come to all the mesures mentionned in the blog.

Interesting! Africa definitely needs an economic reform that can stimulate growth and help countries achieve structural transformation. As its mentioned in the article, regional tax reform through these four key key dimensions based on trust: four key dimensions of trust:fairness, equity, reciprocity and (accountability. Well, I’m glad you highlighted it because our leaders who have the ability to distribute income and wealth fairly have shown their lack in these key dimensions.

Even though It’s a political debate, we shall point the issue of dishonesty, uncaring mixed with abuse of authority that African population have been enduring for years from their leaders. This is something must change if we want to reduce those economic gaps as well.
Like you said, Rwanda have stepped up and is doing so much better. The country is becoming very attractive and safer than before despite the fact that they’ve dealt with genocide. I believe Paul Kagame is doing a great job and has built and developed trust between him and the population of Rwanda.

Another point in my opinion would be a huge focus on education. As a matter of fact, almost 60% of youth between the ages of about 15 and 17 are not in school in Africa. (UIS data)
We need proper schooling facilities ( buildings, school bus, materials, enough teachers etc) and better and equal opportunity for education across countries.
From kindergarten to high school, education should become less of the privilege because a poor family deserves to have their kids sitting in class and learning something. Once we’ll have a lot of educated people, the degree of citizens participation in the country’s affairs (economic, politic, military, education, healthcare, agriculture etc.) will increase which will be beneficial for us, AFRICANS!!!

Lastly, we need a computerized administration for every single field affecting our economy. We need to move FASTER!!! With that we introduce a better tracking system of our citizens by probably matching a person to a social security number (I believe some African countries have this system). So with a SSN we can develop a lending system like in the US where we can track your spendings, your ability to pay back, your work status etc.