The Ebola epidemic may be over soon, but the emergency won’t be


In May, the World Health Organization released numbers on how many health workers in Guinea, Liberia, and Sierra Leone have been affected by Ebola. The numbers are striking: For these heroic workers, the probability of being infected by Ebola is 21 to 32 times more likely than for a member of the general public.

Figure 1: Stock of Health Workers before and after Ebola 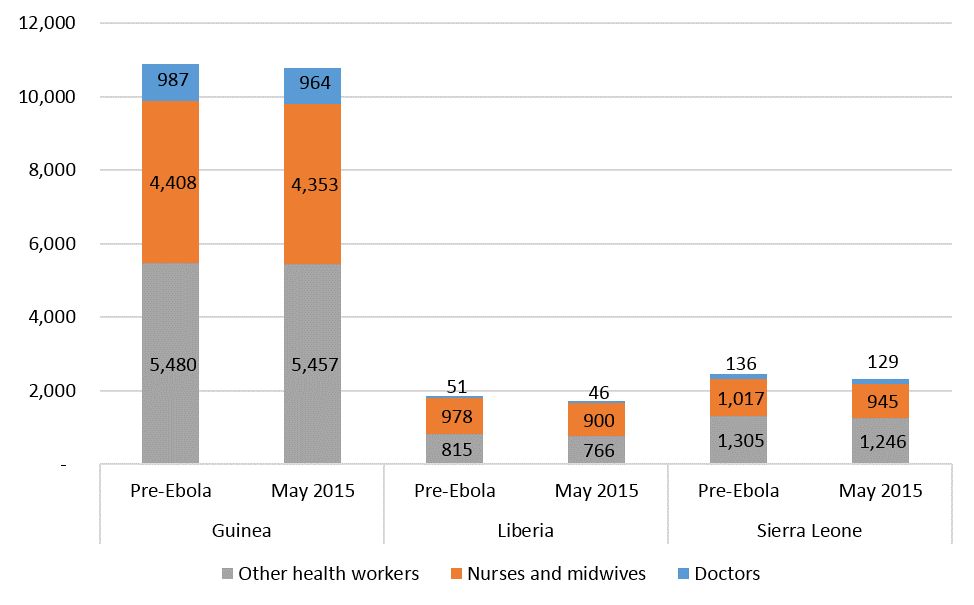 How might that affect maternal and infant mortality after the epidemic?
Even beyond the tragedy of loss of life for many of those infected, the disproportionate infection and subsequent mortality of health workers has a long list of negative spillover effects, each of which comes at a heavy cost in lives. After the current epidemic, aspiring young people previously hoping to become nurses may be dissuaded by the perceived high risk. Some local doctors may more actively seek employment opportunities outside the country. But one likely direct effect is increased mortality due to the fact that there are fewer health workers to provide services.

In a paper released today at the Lancet Global Health (you can read a longer version here), we calculated the potential impact of health worker mortality from Ebola on subsequent maternal, infant, and under-five mortality.

How did we do this? We combined four pieces of data: (1) the WHO data on health worker mortality, (2) the stock of health workers before Ebola, (3) maternal, infant, and under-5 mortality rates for each country before Ebola, and (4) health worker mortality coefficients. That last one merits a little explanation: Over the last 15 years, a number of researchers have sought to characterize the link between health workers and mortality rates, using data from across countries and over time. We used the estimates from Speybroeck et al. (2006) because they draw on the largest sample of countries, although the thrust of our results didn’t change when we used estimates from other papers.

In short, we looked at how many health workers have been lost in Guinea, Liberia, and Sierra Leone, and combined that with what we know about how health worker deaths affect other forms of mortality to see how much maternal, infant, and under-5 mortality might rise in the wake of Ebola. The numbers are high. As you can see in the table below, maternal mortality could rise by 74% in Sierra Leone, by 111% in Liberia, and by a still tragic, but relatively lower, 38% in Guinea. The numbers are smaller and less precise for infant and under-5 mortality, but all indicators point to increases. Overall, these percentages translate to 4,000, 7,000, and, 14,000 additional maternal, infant, and under-5 deaths – respectively – each year across the three countries.

Table 1: Increase in Mortality Due to Ebola-related Health Worker Mortality

In historical terms, this puts these countries back 15 years (in the cases of Guinea and Sierra Leone) or 20 years (in the case of Liberia) with regard to maternal mortality. That may generate fewer headlines than the Ebola epidemic itself, but it shouldn’t.

Of course, these estimates come with a lot of caveats: The cross-country link between health workers and maternal mortality may be different in these particular three countries. There are other indicators of health system quality that are omitted from this analysis. Et cetera. (Read all about them here.) But this shines a light on the likely direction and order of magnitude of this impact.

What’s the solution?
The policy recommendation here, we’re afraid, is not shiny and new. It’s already part of the Ebola Recovery Plans for Guinea, Liberia, and Sierra Leone. But it’s crucial. Use Ebola as the catalyst to strengthen health systems far beyond their pre-Ebola levels. We can think of about 25,000 mothers and children who will thank you each year.
Topics
Health
Jobs & Development
Education
Countries
Guinea
Liberia
Sierra Leone
Regions
Africa Appreciated this entry and the Lancet paper and the findings therein. No need to 'be afraid' with your policy recommendation. As you have noted, it is a big part of what needs to, and hopefully, will be [continuously] done: health systems strengthening!