Education in Yemen Struggles after More than a Year of Conflict 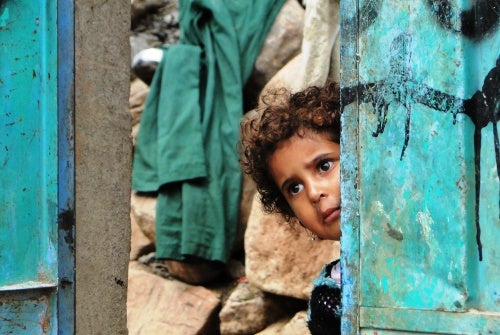 Education in Yemen witnessed noticeable improvement during the pre-war period 1999–2013. School enrollment rates rose from 71.3% to 97.5% of children. In the academic year 2012/2013, Yemen’s Education Ministry put the number of school students at more than five million registered in about 17,000 schools that include more than 136,000 classrooms.

Since the war began in March 2015 education has been greatly affected. The number of 1.8 million children who have been out of school in 2015/2016 make up more than a third of the school age population. The United Nations says more than 1,100 schools have been closed either by direct damage to them, or because they are being used to house displaced people.

Despite all this, Yemenis working in education have displayed a high degree of resourcefulness, and the ability to deal with hardship. Professional education teams were able to oversee the final exams that children take for their primary and secondary general certificates for the 2014/2015 school year in all of Yemen’s governorates, as well as in a number of countries that had received refugee Yemeni students.

They were even able to open schools for the academic year 2015/2016, and complete general certificate exams for the year. Despite financial hardship, they were able to open alternative friendly spaces and buildings for schools and displaced people, with the help of development partners who are still active in Yemen.

The new situation has highlighted the need for more decentralization, where many administrative and other responsibilities are delegated to lower local levels, such as districts and sub-districts. Such powers include the redistribution of teachers (male and female), as well as managing enrollment and exams.

Yet, the educational process in Yemen still faces significant challenges: shortages in the financial resources needed for operating schools, the rehabilitation of partially damaged schools to return them to service, and the printing of school textbooks. Moreover, education needs broadening with social activities, as well as psychological support and healthcare for students and teachers alike. That will ameliorate the impact of the conflict, particularly in places and areas where IDPs are hosted.

Due to the continuation of conflicts, there is an urgent need to assist Yemen in designing short-term emergency programs aimed at supporting educational services by ensuring the continued payment of teachers’ salaries and of basic operating costs. That will provide the minimum proper environment for continued education.

People active in education expect Yemen's main development partners to contribute to: the printing of school textbooks, supplying schools with basic inputs, assisting in repairing partially damaged school buildings to return the same to service, as well as providing technical support to emergency units in education management in order to devise plans to acquaint them with best practice.

Alternative solutions are also needed for school buildings by using otherwise unused government buildings or by defraying the costs of temporary, leased buildings, or providing tents to protect students from open spaces. Yemen needs to develop more flexible mechanisms and curricula for educating displaced students whether they are inside or outside Yemen. To lighten the burden of government agencies, civil society organizations have to find more ways of getting involved.

In the medium- and long-term, Yemen needs a plan for reconstruction. And there is an urgent need to restructure the country’s education system by reinforcing decentralization and distributing and separating the terms of reference for various administrative levels, enabling them to tackle challenges, including reactivating school-based management by learning from experiences previously implemented in Yemen.

It is also necessary to activate the Education Management Information System (EMIS) to facilitate management, monitoring, and control of the education process. For better quality education in Yemen, the process of improving the reading, mathematics, and science curricula that started with support from development partners before the crisis need to be continued.
Topics
Fragility Conflict and Violence
Education
Countries
Yemen
Regions
Middle East and North Africa
Series
Back to School Yemen's education system, first and foremost, suffers from deep-rooted corruption that permeates throughout its structure, both horizontally and vertically. Due to corruption, financial resources are mismanaged, not enough schools are built, and many of those built are sub-standards, with no facilities for scientific, sport, and cultural activities. Also, and due to corruption, low quality people are hired as teachers without being properly screened for qualifications and skills, as they are hired mostly because of favoritism and nepotism. Exams are faked,, etc, etc, and we can go on and on with the list of corruption issues in the education sector in Yemen, and their dire consequences. I am truly amazed that you have not made even the slightest hint about corruption in Yemen and its impact on education, generally speaking, and in particular internal corruption in the education sector itself. What you have mentioned in the article are in fact the symptoms of decay in the sector, not the root causes. I think that until the issue of corruption and intentional mismanagement in the sector (at the very least) are not solved at the root, no progress of substance in the education sector in Yemen will ever be achieved. Whatever resources poured in the sector will simply go down the drains. It is as simple as that. As you well know, the symptoms you've mentioned are the same ones we read about 10 years ago, and back then were the same ones we read 20 years earlier on, and we will still mention those same issues 10, 20, and even 30 years from now. Not speaking of the corruption issue is with all regret as simple as like burying the head in the sand. If there has been some progress made in the education sector in Yemen it is only in terms of rough quantity (against quality and results), and the progress caused by some private sector investments (and even that should be gauged in relative terms).
GOOD LUCK WITH EDUCATION !
Adel Mansour
Senior Project Officer
SMED - Small and Micro Enterprises Development unit
Social Fund for Development - Yemen
Skype: adelmansouryemen
Cell/Watsapp: 00967 711 867 202