Which Arab cities are growing fastest? 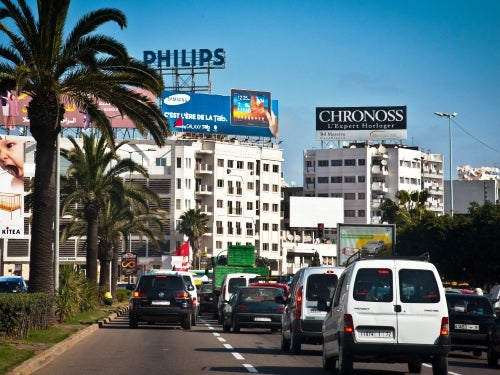 The Brookings’ Metropolitan Policy Program recently released their Global Metromonitor for 2013-2014. This fourth edition of the report analyzes the performance of the world’s 300 largest metropolitan areas on their annualized Gross Domestic Product (GDP) growth rates per capita and employment. These two indicators are merged into an economic performance index to rank metropolitan areas - by comparing them to each other, to their own countries and their previous performance.  This is not a measure of which metro areas are most competitive, wealthy, or livable – the goal is to see how metro areas respond to the world economy and factors underlying their performance.

Before looking at how the Arab world fared in this ranking here are a few key takeaways from the report: The 2014 Top Ten Performers
Overall, Macau (China) was the best performer, followed by Izmir, Istanbul, Bursa (Turkey) and - rounding the top 5 – Dubai (UAE). China and indeed the Asia-Pacific region led in terms of fastest growing cities. Turkish cities had a very good year with 3 in the top 5 and 4 in the top 10. Those numbers were respectively 1 and 2 in the 2012-13 rankings. While all 4 of the Turkish metropolitan areas in the top 10 are strong in manufacturing, their 2014 showing was led by strong expansions in business and financial services. 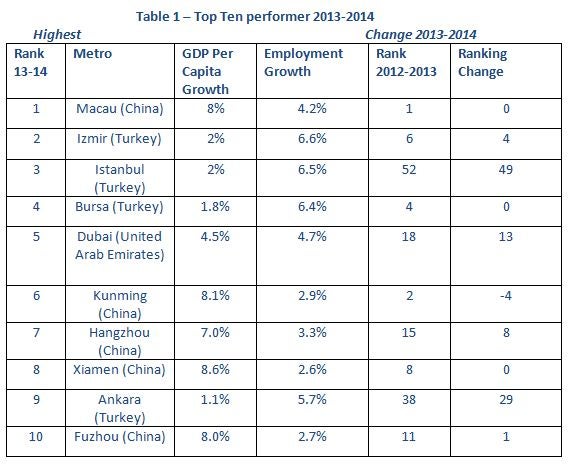 The Arab Cities in the Rankings
Arab cities stood out in a couple of areas. For example, no metropolitan area grew faster relative to its national economy than Dubai. The city’s business and financial services sector powered a 4.5% growth in GDP per capita, versus UAE’s 1.6%. In employment growth, MENA came in second highest at 2.7%, just behind Eastern Europe and Central Asia’s 2.9%.  The listing of Arab cities has not changed much over the past four years, though in 2012-2013 Casablanca dropped off the list (see Table 2 below).

​Most Arab cities in the rankings have recovered from the 2008 crisis, except for Dubai and Abu Dhabi. This is in line with the overall findings that developing metropolitan areas recover faster than developed cities. Here, Riyadh and Jeddah and Kuwait are outliers but this may have something to do with the massive stimulus spending engaged in by the government following the Arab Spring. Cairo too is an outlier, as a developing country metropolitan area it has yet to recover but political turmoil might be to blame.