Climate change exposes millions of people to risk from climate extremes, desertification, land degradation and food and livelihood insecurity. West Africa is particularly vulnerable to these events because in many countries, agriculture is the main source of employment and income. What do people do when heatwaves and droughts threaten their livelihood?

One possibility is that people migrate to other areas. Once climate conditions at home have worsened, people move towards regions where they are more likely to make a living. In the case of West Africa, it might be argued that intra-regional migration flows and flows to Europe would increase. However, this line of reasoning misses the crucial point that many farmers in developing countries are struggling to subsist. While a drought could motivate farmers to migrate, it may have destroyed their financial possibility to do so. Our new paper explores this dichotomy, finding that, indeed, slow-onset climate anomalies like droughts actually lead to a decrease in migration out of West Africa.

What do we mean by climate anomalies? Climate anomalies are events that take place over a month, several months, or even a season, that differ substantially from the climate that has existed over several decades in a region. These anomalies are usually defined by a high variation in precipitation and/or temperature. Our paper combines these indicators in an index to measure soil moisture anomalies (SMA). We specifically focus on anomalies during the crop-growing season when water availability is crucial for agricultural yields. We calculate this at an extremely high spatial granularity, dividing West Africa into 55x55km cells. As shown in the maps below, analyzing soil moisture at this fine spatial level demonstrates much higher variation and a higher number of anomalies, as compared to aggregating up to the country level. 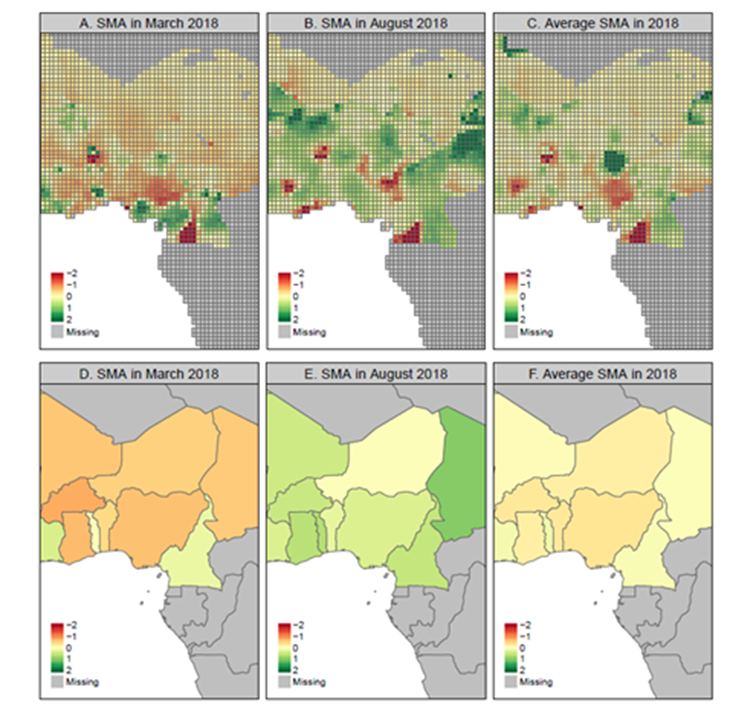 Figure 1: SMA Index: March, August, and Yearly Average at the Grid and Country Level for 2018

Climate data is available at fine temporal and spatial scales, but data on international migration is usually only available at the country level through census data. Trying to link country-level data to climate anomalies can miss out on much of the variation happening within a country. For example, some areas could experience an increase in precipitation while other areas face droughts. Climate indicators aggregated at the country level would measure conditions that are close to normal because the differences between areas net out (see Figure 1). Therefore, better international migration data is key to understanding the impacts of climate anomalies on international migration.

How does our study overcome this problem? Our paper uses novel data about international migration flows, collected by the International Organization for Migration (IOM). The data provides information on the place of origin of the migrant and the time of migration, allowing us to calculate the number of migrants originating from each of our 55x55km cells, as shown in  Figure 2. We then relate total migration in the cell to the specific soil moisture anomalies of the cell. Using fine temporal and spatial data on both climate and migration means that we can estimate more precisely if climate anomalies trigger international migration in West Africa. In addition, we can explore if the characteristics of these areas, such as the poverty level, lead to heterogeneous responses.

Figure 2: International migration in West and Central Africa at the grid level

What are our main findings? Our results show that droughts lead to a strong decrease in international migration, leading to 25% fewer international migrants originating from the affected area. This effect is concentrated during the crop-growing season, which highlights the importance of favorable soil conditions for agricultural yields. Favorable soil conditions have the opposite effect, leading to an increase in international migration. The findings indicate that farmers are only able to realize their migration plans if agricultural yields are large enough to cover the associated costs.

Migration responses to droughts depend on the poverty level of the affected area. People living in areas that are either very rich or very poor do not seem to respond to climate anomalies.  Plausibly, this happens because at the extremes of the income distribution people are always either financially constrained and unable to migrate or able to address financial constraints irrespective of the agricultural yield.

In contrast, people living in areas in the middle of the income distribution are less likely to migrate after a drought. This finding is key because it suggests that people who under normal climatic conditions would have been able to migrate are not able to afford the move, creating a vicious circle. Droughts decrease crop production and reduce agricultural yields. Due to lower yields, farmers in West Africa are not able to invest in adaptation mechanisms such as migration, which sinks them further into poverty. Policies aimed at substantially improving local living conditions as well as increasing investments in adaptation and mitigation strategies to climate shocks are needed to help break this pattern.

We thank Dominik Paluch and Janin Marquardt for providing excellent research assistance. We are also very thankful to the IOM for providing the data on migration and to Damien Jusselme for wonderful guidance on their use. Post-Doc Researcher at the RWI - Leibniz Institute for Economic Research Professor of Health Economics and Development Research, University of Hannover