Financial services such as payments, savings accounts, and credit can help drive development by helping people escape poverty by facilitating investments in their health, education, and businesses. Given the range of potential benefits, the Global Findex Database 2021 offers rare positive news on growth in both account ownership and use of financial services during a turbulent financial year.

Here, we offer a preview of the top five findings:

In 2021, 76 percent of adults worldwide had an account at a financial institution or through a mobile money provider, up from 51 percent in 2011. Account ownership in developing economies grew from 63 percent to 71 percent in the last few years due increase in access in dozens of developing economies and in stark contrast to the growth seen from 2011 to 2017, which took place mostly in China or India. In Sub-Saharan Africa, mobile money largely drove account ownership increases.

2. The gender gap in account ownership narrowed for the first time in the last decade.

3. The COVID-19 Pandemic has accelerated digital adoption of financial services.

The COVID-19 pandemic and social distancing restrictions accelerated the adoption of digital payments. For example, more than 80 million adults in India and over 100 million adults in China made their first digital merchant payment, either online or in-store, for the first time after the start of the pandemic. In developing economies, even excluding China, 20 percent of adults (720 million) made a digital merchant payment in 2021.

4. About half of adults in developing economies could access emergency money within 30 days if faced with an unexpected expense, and about two-thirds of adults were very worried about at least one source of financial stress. 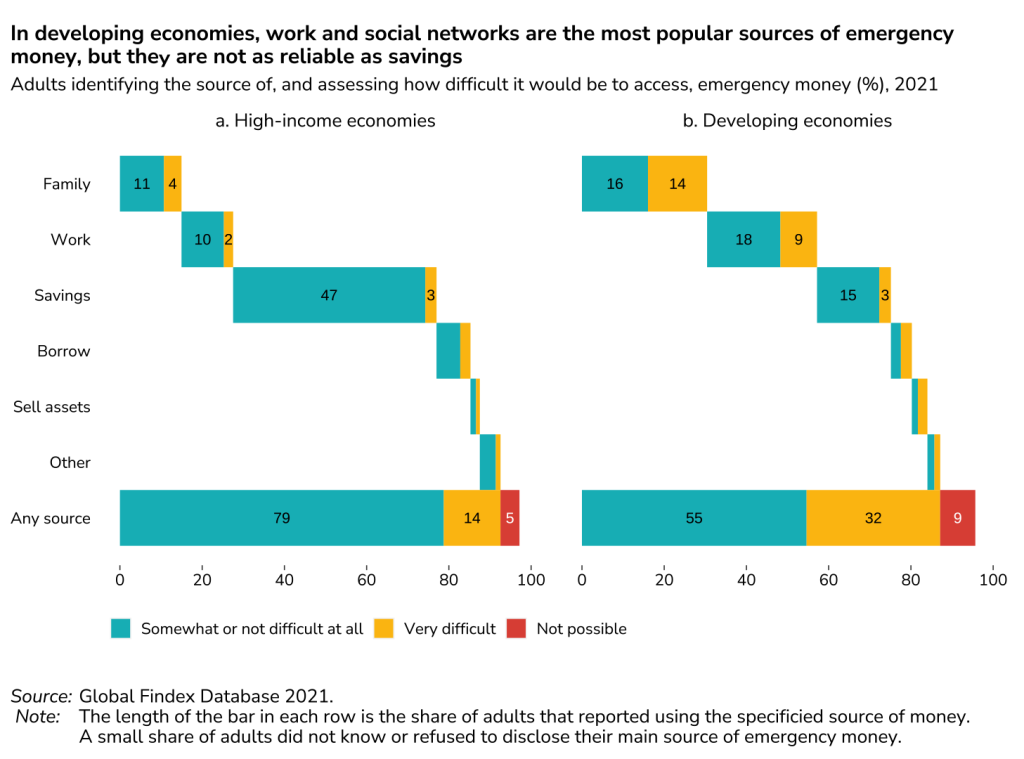 Just over half the adults could tap into emergency money within 30 days without much difficulty. The most common source was friends and family for 30 percent of adults in developing economies, though nearly half of those said the money would be hard to get.

People also told us which financial issue they worry about the most: About 50 percent of adults in developing economies were very worried, in particular, about covering health expenses in the event of a major illness or accident. As for the common worries in high-income economies, one in five adults (20 percent) are very worried about paying for health care, and an equal share (21 percent) is very worried about finances in old age.

The database reveals a number of opportunities to expand access for the unbanked, in particular by leveraging digital payments. Millions of unbanked adults received payments in cash—for wages, government transfers, or the sale of agricultural goods. Among these, about 85 million unbanked adults still receive government payments in cash.  Digitalizing some of these payments could be cheaper and could reduce corruption for the government at the while bringing recipients into the formal financial system. We already have evidence that this works—the Global Findex 2021 finds that 865 million account owners in developing economies opened their first financial institution account for the purpose of receiving money from the government.

Financial inclusion has become a cornerstone for both short-term relief and sustainable recovery efforts since the COVID-19 pandemic. But challenges remain. As we seek to move out of the pandemic and as governments seek to consolidate the momentum and expand access to digital banking services, policies must factor in protections for the most vulnerable among us, including women, the poor and those with limited educational attainment or financial literacy.

Visit our website for more details on the Global Findex Database 2021, to view translated summaries in Arabic, French, and Spanish, and to dig into the data yourself with our Data Dashboard, Interactive visualizations, or our Databank. Be sure to follow us on Twitter @GlobalFindex!