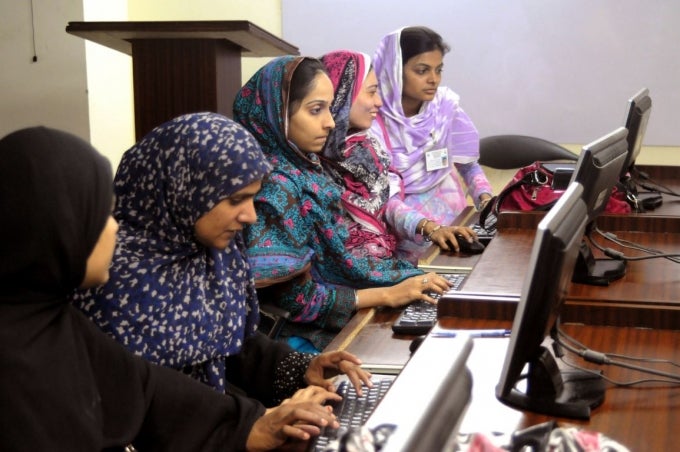 “Woman face harassment in all type of jobs, no matter where or who. One can’t say that she works in a big firm so she is safe… [but] she doesn’t know who will believe her if she reports harassment – she… fears that the others will say she is asking for it.  Thus, she doesn’t say anything.” -Young working woman in Quetta.

This statement was echoed by 93 educated women of all ages in the Pakistani cities of Quetta, Peshawar, Lahore, and Karachi.

In the era of the #MeToo Movement, focus group discussions with these women affirmed that sexual harassment continues to be a part of the experience of urban educated Pakistani women seeking jobs.

The good news is that there’s legislation to protect against harassment, the bad is that few know about it and fewer feel comfortable reporting harassment.

For employed women, sexual harassment disrupts careers and dampens professional potential; its fear can deter women from entering the labor force at all.

We explore this as part of a study on female labor force participation in Pakistan with the Center for Gender and Policy Studies and support from the Pakistan Gender Platform.

The women we spoke with talked about experiencing sexual, physical, verbal, non-verbal or psychological harassment at the hands of supervisors, senior staff members and colleagues, as well as strangers in public transport and spaces.

They also highlighted cyberstalking, staring, phone numbers being leaked, lewd comments, stalking in public places and harassment on public transport as common occurrences, and that such harassment occurs regardless of a woman’s age or socio-economic status.


So how do women explain this pervasiveness of sexual harassment?

Key among reasons offered by the women we talked to is what they consider “men’s nature” to discount women’s efforts at careers even when educated.

A 34-year-old college graduate from Peshawar said, “…a working woman can’t get due respect in society. Being a housewife is honored more in our society.”

Men and women both also may blame women themselves for harassment, asserting that women may invite such behavior by talking or otherwise interacting with unrelated men more than what is strictly necessary in a workplace, or by wearing non-traditional clothes such as jeans.

The women we spoke with unanimously agreed that single women suffered more because men considered them to be sexually available, and several confessed to pretending to be married to avoid such male attention.

The impact of this constant harassment is that some women fear to leave their homes.

Some fear that families would forbid them from working if they talked about the harassment; as a 31-year old unmarried woman in Lahore shared, “If I tell them [my family] about harassment issues, they will restrict me to my home.” Thus, women end up normalizing such behavior. One set of reasons relates to social and patriarchal norms and hierarchy.

As a young woman from Quetta explained: “…a woman has so much shame that she will not raise her voice against these things, she will think log kya kahein ge (what will people say). No-one understands women’s and girls’ problems. In fact others and society start blaming those girls or women themselves.” Consequently, while a few women interviewed may talk to trusted colleagues, parents or spouses if supportive, the more common response is silence, self-censorship, quitting or switching jobs.

Here’s the good news! The respondents recognized that women must speak up for themselves and that Pakistani women have legal recourse against harassment through the ‘Protection Against Harassment of Women at Workplace Act, 2010.’

However, the knowledge that sexual harassment in the workplace is criminalized is limited. Even women familiar with this law “don’t know how to use it or where to report complaints,” as a woman in Karachi noted.

The women also have limited faith in the system: Although they discussed how some companies have proper mechanisms in place to address sexual harassment and had educated their employees about it, many believed harassers, or their powerful allies often serve on biased investigation committees.

Non-literate women or those who are not allowed to venture out of their homes may have even less knowledge of the Act and how it works, said several of the women we spoke with.

Women enthusiastically suggested solutions to increase awareness and understanding through holding community workshops to educate men and women about the Act and its processes; announcements on television and other media; training in the workplace; and, information sessions in schools and universities.

Sexual harassment of women in public spaces and at work is a vital issue to address in Pakistan and elsewhere.  Yet, research on this type of gender-based violence remains elusive, with limited reliable data on prevalence or solutions.

The upcoming study aims to start addressing this gap in Pakistan, including communities’ and individuals’ own suggested solutions that can then form part of the foundation for subsequent policies on solutions to sexual harassment. Stay tuned for updates on our ongoing research.
Topics
Education
Gender
Health
Governance
Social Sustainability and Inclusion
Countries
Pakistan
Regions
South Asia Sexual harassment should be stopped.