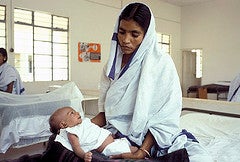 As the World Bank Group, we are dedicated to a world free of poverty. Poverty has many manifestations, of course, but few are sadder than child hunger and malnutrition. It is not just the heart-rending pangs of hunger or the susceptibility of a malnourished infant or child to ailments and diseases. The persistent effects are even more troubling. Poor nutrition impairs physical and mental development so that children benefit less from education and are less productive as adults. It leads to increased morbidity and mortality, causing output losses and increased spending on health and social support. Long ago William Blake wrote "some are born to endless night," poignantly capturing the tragedy of lives blighted by childhood deprivation.

If the extent of hungry children in the world – more than 350 million – is an inconvenient truth, their numbers in the South Asia region are acutely embarrassing.

South Asia accounts for almost half of the world’s stunted and wasted children, with the most severely affected areas exhibiting some of the worst rates globally. This is as big a problem as it is a puzzle. Why has the growth remedy – rising incomes correlating with improved nutrition indicators – not worked in South Asia, in contrast to other regions of the world? Politically, why is there such an action deficit – given the large segment of the (voting) population affected by the problem? And how to make the burden of knowledge, of conquering the very same challenges elsewhere, operationally count in South Asia?

A decisive shift, however, seems to be taking place. There has been some searing advocacy at the very top. Indian Prime Minister Manmohan Singh has called child hunger and malnutrition "a national shame" and a "curse we must remove." There is heightened commitment and programming zeal at the country level. Development partners, working within the framework of the Millennium Development Goals (MDGs), are redoubling their support. Partnerships and alliances, involving a broad front of development stakeholders, are increasing focus on the hunger and malnutrition agenda. Within the South Asia Region of the World Bank, our management team in the last few years has consistently made nutrition one of our top priorities. We have also adopted the premise that business as usual was not delivering.

Achieving effective food and nutrition security requires fundamental changes in the game plan. The multi-sectoral nature of the agenda, embracing issues relating to food availability, access and utilization, has been evident to all for some time, rather like a looming mountain. However, finding pathways up that mountain has proved more difficult, both because cross-sectoral operations are inherently more complex, and their implementation arrangements typically straddle sectorally organized ministries or departments. This is especially so when investments in agriculture, water, sanitation, health, nutrition, and social protection have to be coordinated towards nutritional goals. Yet because progress on this front is essential, we in the South Asia Region have been pushing the envelope in various ways.

One example is the South Asia Food and Nutrition Security Initiative (SAFANSI), established in 2010 with funding from the U.K. Department for International Development and Australian AID. It has grown organically to become an enterprise involving teams from at least seven Bank sectoral units working together on the theme of food and nutrition security in South Asia. Its objective, explains Animesh Shrivastava, my colleague leading this effort in the Sustainable Development Department, is to enable more effective and integrated actions in South Asia. Its approach is simple: Help connect the dots.

For the sake of its children – the basis of the vaunted demographic dividend that sets it apart from countries like China – South Asia can and must overcome the challenge of child hunger and malnutrition. It has been done elsewhere, and we have better knowledge and resources now. In dreams begin responsibilities, they say. I would like to imagine SAARC leaders committing to a Regional Development Goal, like the MDGs, to eliminate child hunger and malnutrition by the end of this decade. We would be happy to support such a challenge and a dream of no more hungry children. A well written article and so relevant to our region. When you visit countries like ours...... the very first sight you see as you arrive in a city like Delhi are little children wearing little to nothing, some stunted, some anorexic... approaching your car at road signals begging for money. If we (individually or as the World Bank) can make a difference in the lives of these children through better nutrition, shelter, education, health etc... it will truly be a remarkable achievement.

There is no reason why India needs to look to the World Bank or any other international agency to address its huge child malnutrition and child mortality problem. It has the material resources it needs.

A good place to start would be to make the Integrated Child Development Services program work as it should. I have suggested a way to do that in