High and rising income inequality is a serious concern in many countries, as highlighted in the IMF’s recent Fiscal Monitor. Wealth, however, is distributed even more unequally than income, as in the picture below. 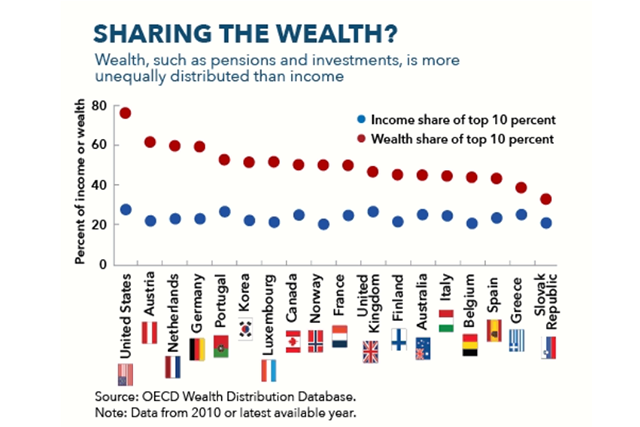 Although Piketty has famously proposed a coordinated global wealth tax of the wealthiest at two percent, there are now very few effective explicit wealth taxes in either developing or advanced economies. Indeed between 1985 and 2007, the number of OECD countries with an active wealth tax fell from twelve to just four. And many of those were, and are, of limited effectiveness. Very few developing countries have a wealth tax on the books—and India removed its wealth tax in its last budget.

The design of wealth taxes is notoriously prone to lobbying and the granting of exemptions that the wealthiest can exploit. Furthermore, the rich have proved adept avoiding or evading taxes by placing their wealth abroad in low tax jurisdictions. Estimates by Alstadsæter, Johannesen and Zucman suggest that roughly eight percent of all household financial wealth —about 10 percent of global GDP—is held offshore in low-tax jurisdictions, and roughly three-quarters of this goes unreported. For developing countries, the figures are even starker. Some 22 percent of all Latin American financial wealth is estimated to be held overseas, and for Africa, the number rises to a whopping 30 percent.

This hot topic of how tax systems can assist in addressing excessive increases in wealth inequality was discussed at the regular IMF-World Bank session on taxation last October. Taxation and inequality will also be considered at the first conference organized by the Platform for the Collaboration on Tax, being held at the United Nations in New York tomorrow.

We think there are several areas in which progress can be made.

Tax system design matters. More effective taxation of the rich requires attention to many aspects of tax design and implementation. The absence of an annual wealth tax, for instance, may not matter so much if the capital income generated by that wealth, and its transfer between generations, is effectively taxed.  And it may make sense to tax different types of wealth in different ways. Much wealth is tied up in real estate, for instance, so that property taxes can serve as a valuable if imperfect form of wealth taxation (albeit one that, as Alex Cobham emphasized during the event, is likely less effective at reaching the super-rich). Worth remembering too is that badly designed wealth taxes that are open to avoidance—through excessive exemptions, for instance, or weak taxation of gifts and bequests—can cause large distortions yet raise little revenue.

Go after the hearts and minds to get to the pockets. At least some among the very rich recognize some social benefit from being taxed more heavily (for instance, Bill Gates’ father). Perhaps then there is more that can be done to foster that sense of social responsibility, by drawing for instance on the evidence of development impact from targeted spending in poor countries, for instance in educational attainment. More generally, the wealthy, like the rest of us, are more likely to be willing to pay taxes—and less likely to conceal their assets—where government is trusted and efficient, and property rights are secure.

Bring in coalitions for support. The media report that the world’s multinational companies were avoiding paying billions of dollars in the countries where they conduct business. Civil society organizations have focused on apparent revenue losses in the developing countries. Most of those reports expressed the view—with which not all would agree—that aggressive tax avoidance represents morally unacceptable behavior on the part of the multinational businesses. Investigative journalism has brought these concerns even more to the fore.

Think about the wealth managers. Intermediaries who help hiding wealth care about their reputations.  This provides an avenue for co-opting them into helping reform the system, not least by, in some cases, becoming whistleblowers. The sense of injustice that accompanies a public awareness, even of activities that are legal, can provide a powerful spur to political action. This is a point stressed in the work of Brooke Harrington, another speaker at the Annual Meetings. Worth bearing in mind too is that whistleblowers have in some cases received very substantial financial rewards.

More transparency can help increase scrutiny. The exchange of tax information between countries is a powerful tool for addressing unreported income and wealth, for developing countries and advanced economies alike. There can be no doubt that the G20-led initiatives in this area are a remarkable and perhaps ultimately game-changing approach to the taxation of the wealthy across borders. But it is important to ensure that tax authorities in developing countries will reap the benefits of information sharing. International organizations can assist in improving the fit of these standards for developing countries, and support the movement towards greater public information on beneficial ownership and aggregate offshore wealth. This can invite useful scrutiny and build more support for fighting cross-border evasion.

It is hard to see an immediate breakthrough for more effective taxation of wealth in low-income countries. But we do see good cause to be less pessimistic than even a few years ago. Thanks for building a strong case on how to 'better tax' for shared wealth. On exchange of tax information between countries, I also hope there is increasing evidence of tax treaties being revised and developing countries becoming more discerning when awarding tax exemptions, including for ODA related goods and services.

Those who can pay should. Tax ALL profits, no matter where held. 15% on stock sales held 5-10 years, not 1. 105% tax on new profits while representative is in office.

So long as our tax framework designs remain exclusively national, then competition for Global capital will continue to drive the "race to the bottom" in taxation. The key to tax reform must be to reach a Global consensus on common frameworks for tax system design, including universally agreed minimum tax rates, below which no country that wishes to trade openly with G20 nations (85% of the Global economy) can go below. At the same time greater public transparency and automatic exchange of information, including country by country reporting for Global corporations, will be essential to ensure everyone is playing by the same rules.
The strategic choices on what forum we use to achieve this consensus are complex : EU, G20, OECD, UN, or some new form of Global Partnership ? Whichever path proves possible, in the end it will require greater public pressure and inspired leadership to bring about reforms. We know that greater cooperation will be opposed by powerful interests of the top 1% - indeed there is much evidence to suggest they have secretly sponsored and encouraged the current upswing in nationalism, simply to prevent such cooperation advancing any further. As Winnie Byanyima of Oxfam points out "Turkeys don't vote for Christmas".
But there is also a more positive story here that economists must start to reinforce. In the long run taxation and public investment is essential to create new opportunities and rapid expansion of the Global economy, which will benefit rich and poor alike. We have to replace "trickle down" assumptions with new economic narratives which simply reflect the truth - that we are ALL better off, when we are all better off.
Robert P Bruce
author www.TheGlobalRace.net

It's fantastic that you are getting thoughts from this post as well as from our dialogue made here.

Who will legislate this fiscal imposition?