Getting the basics right: How to manage civil servants in developing countries

Governments can only be effective if the people in government – that is its civil servants – are motivated and able to implement policy and services well.  In many developing countries, this remains a remote aspiration. Corruption, lack of staff motivation and poor performance are both popular stereotypes and real-world facts. For many decades, international aid programmes have invested in civil service reform to change this reality. The track record of these reform programs has unfortunately been poor.

Reform progress has been hampered in part by the lack of robust evidence on ‘what works in civil service management’. How can institutions manage people in developing country governments in ways that enhance motivation and performance, while reducing corruption?  Several recent studies have looked at specific interventions in particular countries (see here, here and here, for instance). However, what works across countries and civil service management practices has been less clear.

To shed light on this, we surveyed 23,000 civil servants in Africa, Asia, Latin America and Eastern Europe (with funding from the British Academy – UK Department for International Development (DFID) Anti-Corruption Evidence Programme).[i] This is the largest published cross-country survey of civil servants in developing countries to-date.

What can we learn from the survey data about how to manage civil servants to get a more motivated, committed and ethical civil service? The statistical analyses of our survey data (detailed in our recent report) underscore that getting three basics right has consistent positive effects:

1. Prioritize professional merit over political and personal considerations in civil service management decisions. Civil servants who are recruited or promoted through political or personal connections (for instance through support from friends and family) engage more frequently in corruption on the job, and perform more poorly. Our survey suggests that the politicization and personalization of civil service management decisions is far from uncommon. In the ten countries surveyed, 41% of civil servants got their first job at least in part thanks to personal connections; for 34% of civil servants, they helped them get promoted and for 22% they mattered for their pay rises. At the same time, 20% had help from political connections to get recruited and promoted, and 15% to get pay rises.

3. Pay enough to retain more motivated civil servants and prevent large-scale turnover of high performers. Most civil servants in developing countries are concerned about their pay. In our survey, only 37% of civil servants are satisfied with their salary; and only 40% think that their salary alone is sufficient to sustain their household. However, this does not seem to imply that higher pay motivates staff: in our data, it is not associated with greater work motivation. However, we do find an indirect positive effect of pay. 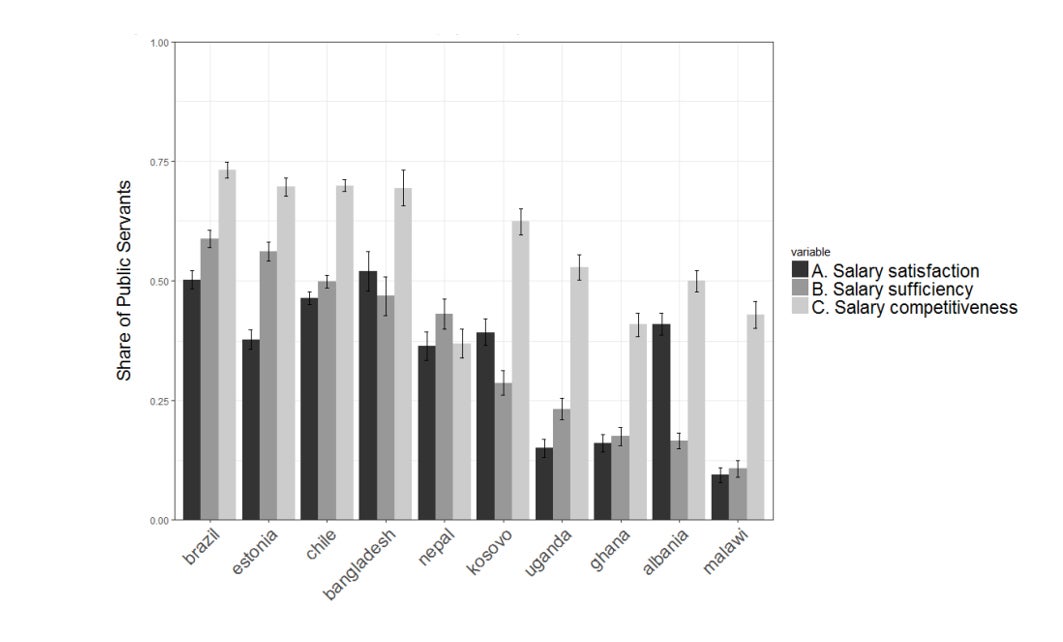 Implementing these three practices are, of course, not the only ones that matter for more effective civil services. Our data, however, suggests that they are important “basics” that should be consistently in place across public sector institutions. These “basics” are remarkably consistent with the World Bank’s – and other lender’s – traditional civil service reform agenda. The failure of these reforms might thus stem more from implementation failures and political obstacles than design.

One important caveat is due: our data shows that the attitudes and behaviours of civil servants and the way they are managed vary sharply across public sector institutions within countries. Other surveys show similar patterns. On which “basic” civil service reforms countries should focus on therefore depends on the institutional realities that the reforms seek to change.

[i] The ten surveyed countries are Malawi, Uganda and Ghana in Africa, Bangladesh and Nepal in Asia, Brazil and Chile in Latin America and Estonia, Kosovo and Albania in Eastern Europe. How can we get a good understanding about of what our social consists and how it works? Many of us don't seem to care and imagine that it is so complicated a subject with which we should not take up our time! This is wrong on two scores, a) it is not anything like as complicated as we sometimes think (if indeed we do stop and try to understand it) and also b) because as members of the general public (with some voting rights at least), we should care about it from an ethical and future generations viewpoint. An employee in a government service/management job should care about it too, because it is closely related to his/her responsibilities.
The past ways that these workers are educated into this service is according to the old well-established schools of thought associated with the economics being taught at university departments, many of which are out of date and have not changed their lessons for years (and are not inclined to until their present leaders retire and a newer and better set of teachers can be installed).
But the science of macroeconomics or social systems has made great progress over the last few years and at last it is fair to claim that it has managed to replace what was a pseudo-science with a real one. I wish to introduce you to this change through my research and the associated writings, because unlike the past intuitive approach we can now use a sensible, logical and orderly one that is almost like how engineering decisions are made. As a retired engineer this kind of thinking is not surprising in my research, and the method used of functions not individual decisions (because most of us have a mixture of different decision-making, which share much in common but are not the same) is through considering our aggregate activities. I reckon that within our social system there are but 19 different kinds of these activities and so one can simplify and begin to better understand about our system's workings.
This vital knowledge should be made available and well shared by all potential governmental workers and decision-makers, who could greatly benefit from my writings about our society and about the general way it is structured in nearly all modern communities. So I am offering for free an e-copy of my 310 page work "Consequential Macroeconomics--Rationalizing About How Our Social System Works" to anybody concerned with it, who writes to me for an e-copy [email protected] At last some true science has emerged in macroeconomics, and it will clear up so much of the past confusion that you will never have the difficulties of past understandings.