Public Participation in the Budget Process in the Republic of Korea 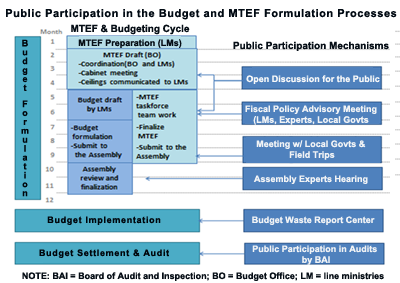 Beginning in the 1990s, Korean citizens’ awareness of and demand for transparency and reforms heightened. The role of NGOs in monitoring government policy and budget allocations increased, and the government started to take them more seriously. Against this social phenomenon, in 2003 former President Moo-Hyun Roh took office. His political philosophy centered on transparency and public participation in government.

This social and political background provided an opportunity for the Budget Office to introduce public financial management (PFM) reforms, including a medium-term expenditure framework (MTEF), top-down budgeting, performance-based budgeting, and integrated financial management information systems, focusing on empowerment and stakeholder participation. Different participation mechanisms were created to involve the public in budget formulation, implementation, and settlement. Today, the general public can participate in budget formulation through a hearing called Open Discussion for the Public (ODP), which involves outside experts including professors and researchers, in setting policy direction and allocating resources. Local governments can also exchange ideas with the central government through field trips. The public is encouraged to report cases of budget waste to specified hotlines and can request that the Board of Audit and Inspection audit certain agencies. (These mechanisms are summarized in the figure above.)

Does Open Discussion for the Public Influence Resource Allocation in the Medium Term?

Any individual can attend and participate in the ODP proceedings, making it one of the most important mechanisms for public participation. ODP lasts for five to six days and addresses two or three sectors per day, until the 12 participating sectors are covered. Each sector is allotted one 90-minute session for deliberation and discussion, which concludes with questions and comments from the floor. Programs on the agenda are selected from among programs for which agreement on direction has not been reached, or are directly related to the quality of citizens’ lives. To ensure a balanced perspective, each sector convenes a panel consisting of public financial management experts, high-level government officials from line ministries and the Budget Office, budget execution entities, and NGOs. The public is informed of the overall schedule and agenda in advance through the press and the venue can usually accommodate about 300 people. The hearings are publicly televised to ensure transparency and access to information.

Despite success at fostering public participation, the ODP has been criticized by some academics for being an impractical and inefficient means for determining exact budget amounts for projects. A number of practical reasons contribute to these concerns. First, it is difficult to discuss the exact amount of money to be allocated to a specific program with members of the general public who have little or no expertise with budgets. Second, budget allocations for projects should not be considered in isolation. Projects should be reviewed under the overall fiscal envelope and according to their prioritization within the national plan. Third, more than 8,000 government programs pass through the Budget Office annually, making it impossible to address each one comprehensively at the ODP.

In spite of these criticisms, some of the suggestions and inputs provided at the ODP have been reflected in the budget, at least in the medium term (details can be found in a study to be published in June on PREM Notes). Furthermore, ODP is a huge undertaking and a step in the right direction for participatory government. For this reason, reviewing Korea’s case is worthwhile, not because it is the perfect model but because it is breaking new ground.

For a more detailed description of Korea’s public participation mechanism, watch out for a Governance & Public Sector Management Special Series PREM Notes to be published in June 2013. Yes, Any individual can attend and participate in the ODP proceedings, making it one of the most important mechanisms for public participation.

Hi! I like your publications on public sector management, budget process and control

Hi, How I wish the Cameroon government could ever dream of applying this. The degree of waste I see in this country is alarming. The degree of misdirected budget planning is assassinating. Is there a special program like this that can help persuade governments to apply this degree of transparency? We might have to wait for about 10 more generations for this idea to be welcome in Cameroon. What can be done??