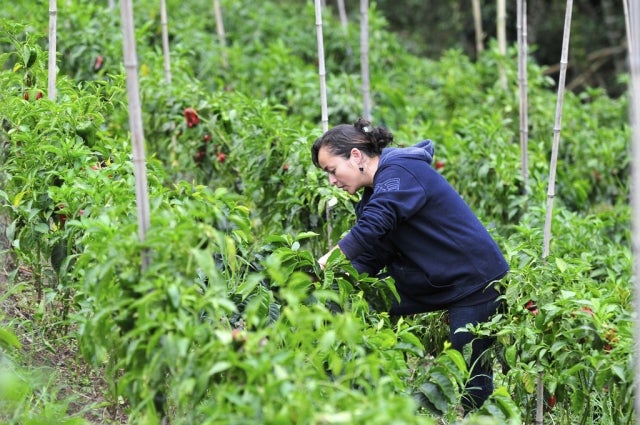 As part of the recent peace accords, Colombia is returning land to the victims of a 50-year internal armed conflict. This includes the protection of women's fundamental rights, which is especially important because the violence and forced displacement had a higher impact on rural women.

In the countryside, women are not aware of their land tenure rights and are often not included on land titles and deeds. Therefore, it is more difficult for them to prove their land tenure rights.  In this context, as a Colombian, as a woman, as a mother myself, and as a land professional, I wonder… when it comes to restituting land to women and rural families, what makes the difference? After so much suffering, what helps families get back on track and restore their livelihoods? For me, it is also a matter of making the restitution sustainable while strengthening social cohesion and reconciliation.

For example, Mrs. Blanca got her land back, after 24 years of internal forced displacement. "More than the land, the war had taken away our hope, enthusiasm and joy," said Mrs. Blanca, who, with her husband and four children, was twice forced to leave their parcel in Trujillo, Valle del Cauca, Colombia. The first time was in June 1991, due to an armed confrontation that included the disappearance of 11 community members. After a year, the entire family returned, but the war hit again. In 1993, Mrs. Blanca received a clear message from the illegal armed groups:
"If you do not want to die, leave the land, you have 8 days.”
This was a scenario of systematic violence known as La Masacre de Trujillo, which included a bloody chain of crimes during the 1990s, followed by progressively new and strong domination of the paramilitaries’ illegal groups.

After leaving her land, Mrs. Blanca had to flee to a city and remain alone with her four children, while her husband went somewhere else to work. "It was very difficult. I had to fight for my children, far from my land. I was losing my strength, but now I feel like an empowered woman. The restitution has given me back my property and, in addition, it has taught me that women also have the right to have an opinion and to decide about the land. Before, I was not aware of it, but now, I know,” Mrs. Blanca told me.
Now Mrs. Blanca is included on the land title, and she is planning the family’s future on their land. Why? What made her want to return and to stay? The key part is that she not only recovered her land, she is farming it and getting an income out of it. Mrs. Blanca received a subsidy and technical assistance to start up income-generating activities on her land. This has helped to get about 100 Trujillo families back on track, improving their economic situation.

From this experience, my lesson learned is the importance of including rural development and economic activities, in a broader framework of land restitution programs, all towards peace consolidation. In this sense, it is not just restitution, return or resettlement as a goal in itself, but as a way to prevent future conflicts through territorial development.
In Colombia, the restitution policy includes: When I asked Mrs. Blanca about her past, present, and future, she answered: “The past must be left in the past. I am building my family’s present and future by growing coffee, feeding the chickens and pigs, and painting the new house.”

Mrs. Blanca is now planning the future with hope and enthusiasm, leaving behind the sad days of war. Her comments were very clear and inspirational to me:
"We women have rights and a very important role as wives, mothers, daughters, and above all, as persons. We are contributing our heart and our work to make peace possible. "
And I thought, there is a lot of it to learn from these brave women.