What are trade blocs and how do two of Latin America’s largest compare?

Trade blocs are intergovernmental agreements intended to bring economic benefits to their members by reducing barriers to trade.

Some well known trade blocs include the European Union, NAFTA and the African Union. Through encouraging foreign direct investment, increasing competition, and boosting exports, trade blocs can have numerous benefits for their members.

In Latin America, Mercosur and the more recently formed Pacific Alliance blocs together represent about 93 percent of the region's GDP at 2014 market prices. Who participates in these trade blocs and how do they compare?

Size, membership and performance of Mercosur and The Pacific Alliance
​ 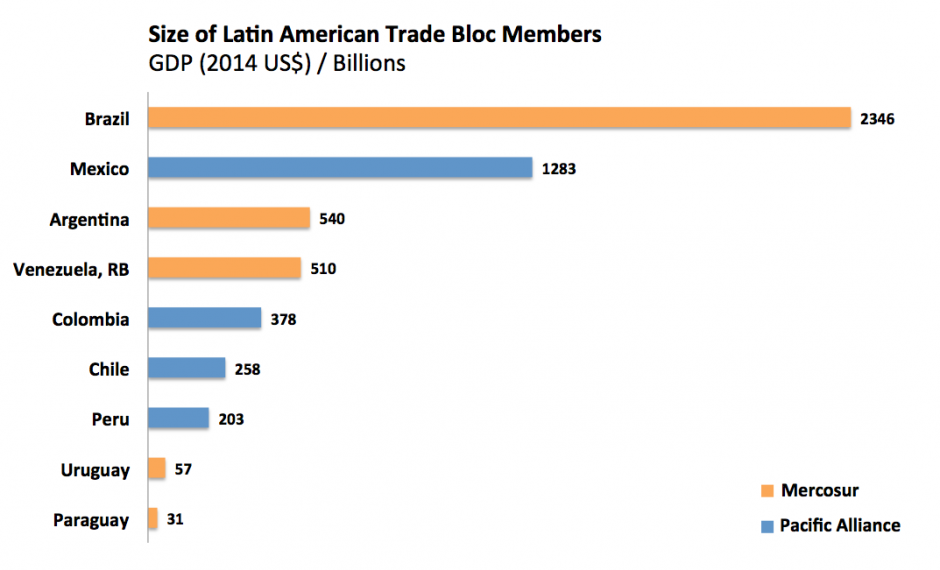 ​The Pacific Alliance is a Latin American trade bloc formed in 2011 among Chile, Colombia, Mexico, and Peru. Together the four countries have a combined population of about 221.3 million and GDP of $2.1 trillion. The Southern Common Market (Mercosur) created in 1991, includes Argentina, Brazil, Paraguay, Uruguay, and Venezuela. Together the five Mercosur countries have 285.0 million inhabitants and GDP of $3.5 trillion.

One of the areas intended to benefit from these agreements, trade within the blocs, accounts for about 4 percent of the Pacific Alliance's total trade and about 14 percent in Mercosur.

In terms of trade outside the blocs, the United States accounts for about 50 percent the Pacific Alliance's trade of goods (largely due to strong links between Mexico and the USA) versus 11 percent for Mercosur. China accounts for 12-14 percent of total trade with both trade blocs.

Weak growth in trade among members in both Latin American blocs
Growth of intra-bloc activity in the Latin American trade blocs has been weak, especially in Mercosur, which has seen a decrease in internal trade to 3 percent below the pre-2008 crisis levels. Similarly, while the bloc has fared better, trends also show a decrease in trade within the Pacific Alliance, despite growth in 2011 when the agreement was signed.

Member economies experiencing a modest growth after the financial crisis

One of the key goals of a trading bloc is to help its member economies grow. Following the financial crisis of 2008, between 2011 and 2014, The Pacific Alliance countries saw average annual real GDP growth of 3.1 percent, versus 1.5 percent in Mercosur. However, neither region has seen a return to the rapid growth rates (around 5 percent) that preceded the financial crisis.

Both blocs adding members, but varied growth in exports and imports

Overall, between 2011 and 2014, exports from the Pacific Alliance increased by an average of 4.2 percent, while exports from Mercosur countries fell by 1.2 percent. At the same time, growth in Mercosur's imports has been falling since 2011, and shrunk 5.3 percent in 2014. On the other hand, after the sharp fall in 2008-2009 and a quick recovery in 2010, growth in the Pacific Alliance's imports has remained positive.