What do private companies look for in a performance-based non-revenue water project? 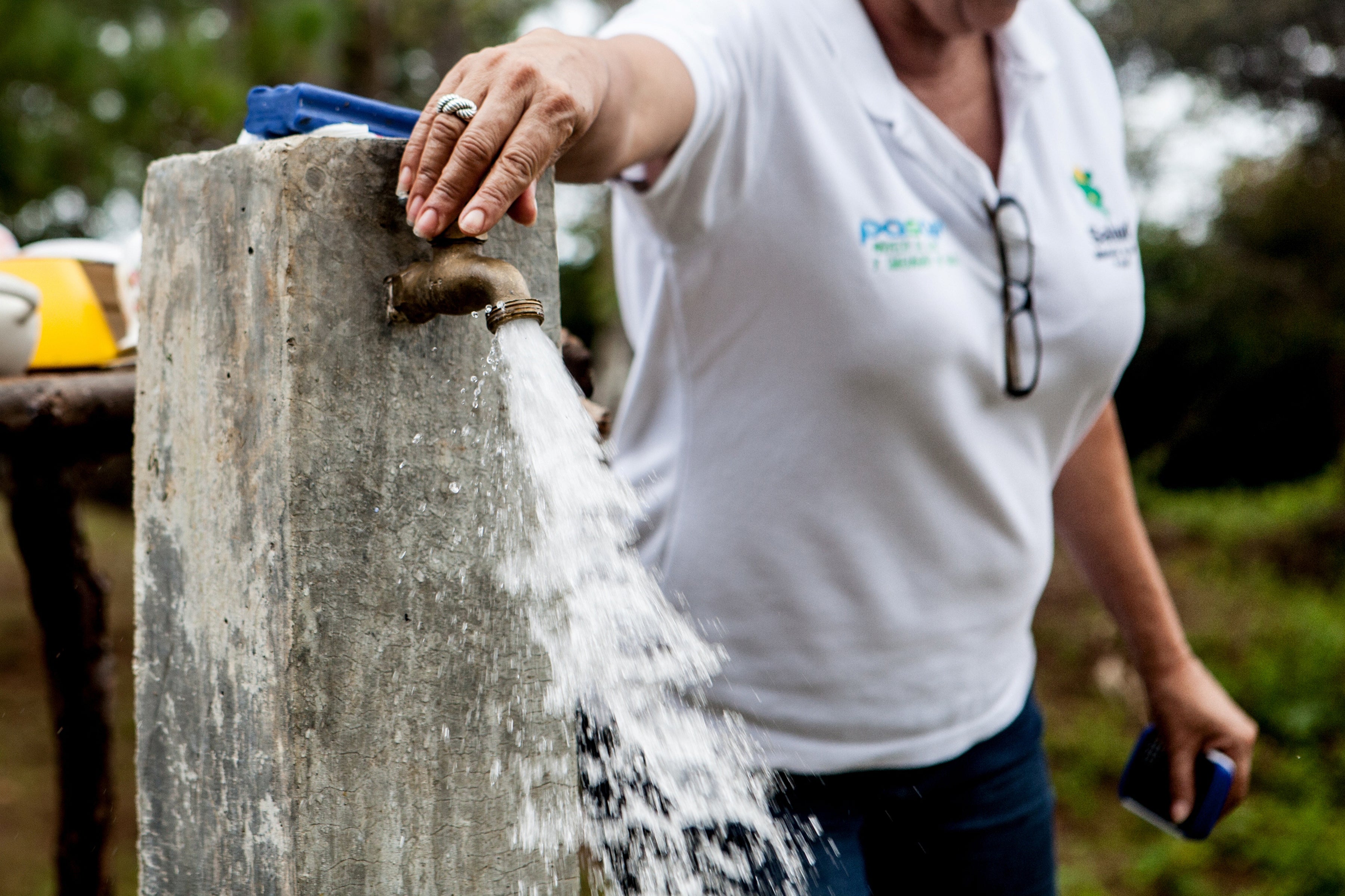 Recent estimates place global annual non-revenue water (NRW), i.e. water produced but not billed because of commercial or physical losses, at 126 billion cubic meters. This translates to nearly $40 billion in annual losses on waste and foregone revenues—a sum, that even if a fraction could be recovered, would underpin a compelling market opportunity for private service companies and a boost to public water utilities’ sustainability.

A new joint initiative is aiming to drive declines in NRW faster, cheaper, and more sustainably by assisting water utilities to engage private companies in performance-based contracts (PBCs). The World Bank’s Public-Private Infrastructure Advisory Facility (PPIAF) and the Bank’s Water Global Practice, in partnership with the International Water Association, analyzed 43 projects and determined that NRW initiatives supported by PBCs are 68 percent more effective compared to those undertaken by utilities alone, (see for example, Using Performance Based Contracts to Reduce NRW) and are systematically faster at reducing the rate of loss. 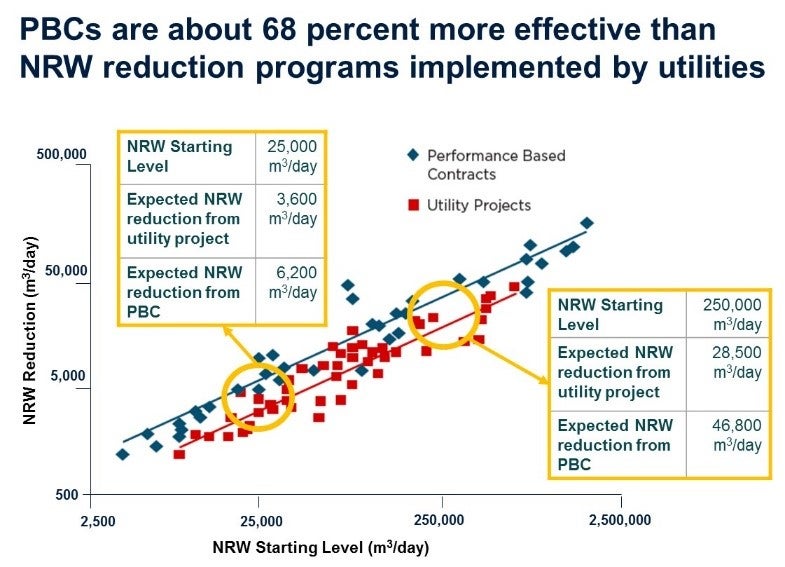 Who are the private companies that work in this space? Are their motives and expectations aligned with those developing the project from the public sector? A market survey of 42 companies globally reveals that private companies are as concerned about finding a fair deal as are utilities.

The companies participating in the survey engaged in a range of activities: engineering design, consulting, utility operation, civil works/construction and supply of technology, commercial systems, and materials. Companies have a local, regional, or international reach and their annual turnover has a large variance—from $100,000 to $10 million, which naturally affects their outlook and expectations.

Here are six things private companies are looking for in performance-based contract opportunities for non-revenue water reduction in emerging markets:

1. Robust project internal rates of return (IRRs)
Whether contractors are expected to bring financing or not, median expectations for project IRRs is around 18 percent, with some companies looking for up to 35 percent. While NRW projects make huge economic sense, careful consideration of project cashflows is needed.  For example, many utilities charge well below cost recovery tariffs and have a backlog in maintenance, not uncommon where leakage is high, which could mean large capital outlays, both of which drag on cashflows.

A strong IRR usually means a tangible financial reason for the government/utility to stay committed to the project. Companies’ expectation on returns is tempered by risk perception. As one company puts it, “If contract risk is reduced, a lower IRR would be acceptable.”

2. Fair risk allocation
Our survey identified four of the most common risks related to PBCs for NRW: We wanted to find out whether companies considered these as high or low risks and how many would assume the risk versus seeking mitigation from the utility/public counterpart. Ninety-four percent of respondents considered pre-financing of materials and supply as being ‘high,’ compared, for example, to only 44 percent that considered efficacy of interventions to be a high risk. This is consistent with the very few number of companies (12 out of 40) interested in projects that would require them to bring financing. Seventy-two percent and 66 percent of companies considered time and cost overruns and payments linked to billings, respectively, as ‘high.’

This is notable: while most companies considered at least three of the risks as being ‘high’, there were almost an equal number of companies considering that they would assume the risk as those that expected the utility to mitigate them, indicating that some companies are looking for more balanced deals, while others had an appetite for taking on risks, for which, presumably they expect to be compensated.

3. To understand PBCs and the local context
Although the majority of companies (65 percent) have been involved in NRW projects, many were not familiar with how PBCs work and a substantial portion (44 percent) seek training on performance-based contracts. A bit more than one-third of the companies also indicated the need to better understand the local water and regulatory context. Working in partnership with local companies is not a perfect solution to overcome the lack of local knowledge, as it brings up other considerations for companies. While a large majority are open to working with local companies, more than 70 percent would only do so where roles and risks are clearly identified and allocated between the partner companies.

4. Sufficient scale and time
Respondents had a wide range of expectations on project size. Expectations on minimum project size correlate well to the size of the companies themselves as well as their view of the opportunity cost of deploying a relatively limited number of expert staff to what they consider as ‘small’ projects. The range that companies were looking for as a minimum were projects that covered at least 7,000 to 125,000 connections. This wide range also translated to expected minimum contract sizes: the lowest minimum threshold was around $500,000 while on the upper end, an average of $5.5 million was considered attractive. Companies expected projects to be, on average, implemented within 20­–48 months.

5. To work in collaboration with utilities
Perhaps contrary to the expectation of utilities, a high portion of potential PBC companies (71 percent) believe that utilities need to be involved in the project and only a few think contractors need to work fully independently. Utility involvement can come in the form of providing access to data, participation in leak detection and repair, identification of illegal connections, to supporting on legal issues, etc. What seems to be an important feature of utility involvement is timeliness. Time is of the essence in NRW control, thus, assuring responsiveness of the utility is important for contractors.

6. To be supported by multilaterals
Companies would like to see development institutions, such as the World Bank, involved in project funding. They see this involvement as a sign of credibility in the project preparation. They also sought support from development institutions to ensure payment by the utility. Timely payment must be ensured to keep the project on schedule. Considering the performance basis of payments, companies are wary of delays in payments linked to slow project progress that is caused by government actions or inaction.

The insights from this market survey are informing a new wave of NRW performance-based contracts being developed by the World Bank Group and partners.  Lessons, tools and resources are also being made available through a new portal on “PBCs for NRW” on the PPP Knowledge Lab. The lessons here are great and of enormous benefits to the various locations where the concepts have been out to use.
Sure, for them, things can only get better.
In Nigeria, the availability of water as a public utility is at a very low level.
The self help employed by Nigerians in the form of the drilling of boreholes is a gradual drift towards an environment disaster.
Based on the above, how well is the World bank considering Nigeria and her people in this laudable Public-Private concept on water provision?
Akanji, Ajibola Anthony
Lead City University,
Ibadan, Nigeria

Thank you for allowing us to be involved in your research.
It was a great opportunity for us to share how we see risk, and also an opportunity to understand better how others view risk.
Clearly more discussion is needed as NRW reduction shouldnt be an optional task for any utility. Twin track planning to supply and demand is needed for resilience.
Finding the right mechanism to reward common sense is a must for NRW PPI.

Dear Andy: Thank you too for participating in the research. So true that NRW reduction should not be an optional task and that we need to find ways to reward this within a PPI!

Very interesting. Wecan introduce the model here in the Philippines, or engage my team on this.