Global competition to attract foreign and domestic direct investment is so high that nearly all countries offer incentives (such as tax holidays, customs duty exemptions and subsidized loans) to lure in investors. In the European Union, the 28 member states spent 93.5 billion euros on non-crisis State Aid to businesses in 2014. In the United States, local governments provided and average of US$80.4 billion in incentives each year from 2007 to 2012.

In order to better understand the prevalence of incentives worldwide, the Investment Climate team in the Trade & Competitiveness Global Practice of the World Bank Group reviewed the incentives policy of 137 countries. Results showed that all of the countries that were surveyed provide incentives, either as tax or customs-duty exemptions or in other forms. Table 1 (below) shows the rate at which these instruments are used across advanced and emerging economies. For instance, tax holidays are least common in OECD countries and are most prevalent in developing economies. In some regions they are the most-used incentive.[1] 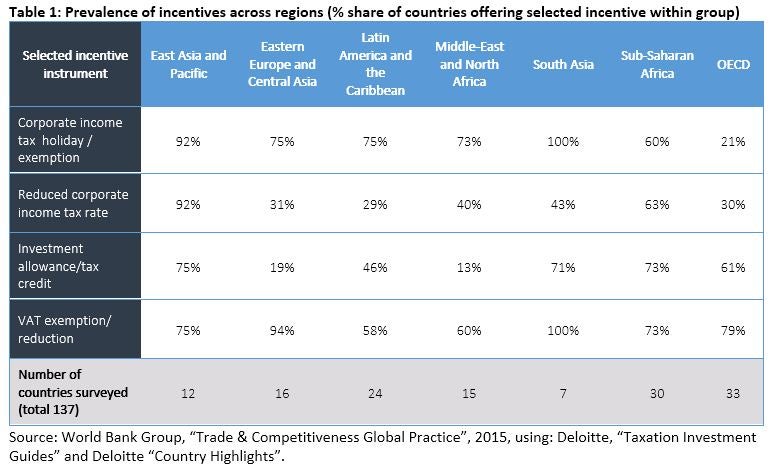 However, despite offering incentives, few countries meet all the requirements of a fully transparent incentives policy. These include: mandating by law, and maintaining in practice, a database and inventory of incentives available to investors; listing in the inventory all aspects of key relevance to stakeholders (such as the specific incentive provided, the eligibility criteria, the awarding and administration process, the legal reference and the awarded amounts); making the inventory publicly available in a user-friendly format; requiring by law the publication of all formal references of incentives; and making the incentives easily accessible to stakeholders in practice. A T&C study now under way on incentives transparency in the Middle East and North Africa (MENA) region showed that none of the eight countries analyzed has a fully transparent incentives policy. (See Graph 1, below.) 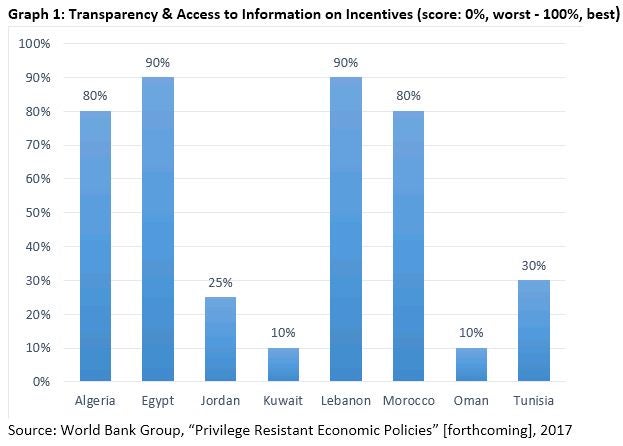 Five reasons why governments should care about incentives transparency

Boosting incentives transparency should be a key item in a government’s reform agenda for (at least) five reasons:


How do we help clients increase incentives’ transparency?

In the last five years, T&C has helped the governments of over 20 countries reform their incentives policy. More than half of these interventions[1] were focused on improving transparency by creating an inventory of all the tax, customs-duty and financial incentives provided to investors by different agencies. With T&C’s help, Bosnia and Herzegovina, Kosovo, Kyrgyzstan, Jordan and Tajikistan have made their inventories public, increasing incentives transparency for stakeholders.

In the case of Jordan, before the inventory reform, only 13 percent of investors interviewed by T&C rated the information publicly available on incentives as "excellent."[2] Based on the transparency score from T&C’s forthcoming "Privilege Resistant Economic Policies" (PREP) study,[3] Jordan has also been one of the worst performers in the MENA region. With T&C’s help, Jordan developed a world-class inventory that is publicly available on the Jordan Investment Commission (JIC)’s e-portal. The inventory is underpinned by an internal IT solution administered by a dedicated team. In addition, in order to make the reform sustainable, the government adopted a notification that mandates its staff to update the inventory on a yearly basis. This reform will make Jordan one of the top performers for incentives transparency calculated using the PREP study’s methodology. (See Graph 2, below). 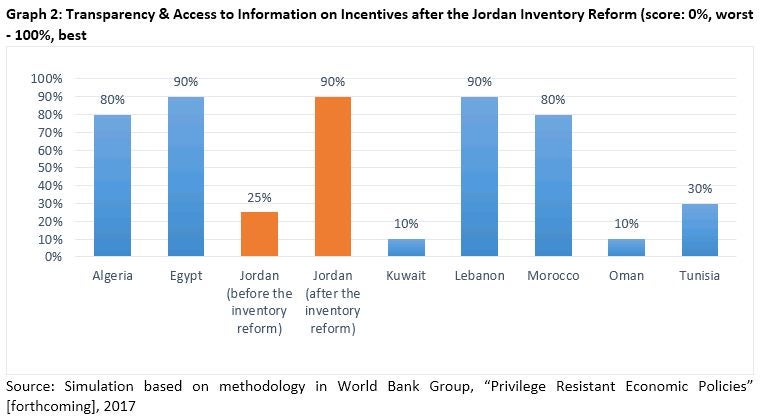 In the words of Husam Saleh, the chairman of the Jordan Garments, Accessories, & Textiles Exporters' Association (JGATE) and the CEO of Fashion Way Company: "The new e-portal and information presented [at the launch event recently held in Amman] will help the private sector to better understand service requirements and available incentives and regulations, which will reflect positively on Jordan's image and readiness as an investment destination."