Cities of Refuge: Bringing an urban lens to the forced displacement challenge

Also available in: العربية | Español | Français
The Syrian conflict has reached the grim milestone of becoming the largest displacement crisis since World War II, with over half of the country’s pre-war population having left their homes since 2011—a particularly sobering statistic as we observe International Migrants Day on December 18, 2017 today.

For many of us, the Syrian crisis brings to mind images of refugee families blocked at European borders and sprawling humanitarian camps. Yet the majority of those fleeing the violence have remained in cities inside Syria and in neighboring countries, in the hopes of reaching safety, and accessing better services and jobs.

This shift from camps to cities and towns has critical implications for how to effectively deal with the forced displacement challenge —and it is not confined to Syria, but a reality across many countries affected by conflict in the Middle East and beyond.

Unlike in earlier times, the current forced displacement crises is predominantly an urban crisis . Across the Middle East - in particular Syria, Iraq, Jordan, and Lebanon - the sudden influx of massive populations has redefined the urban footprint in cities, placing immense stress on local infrastructure, services, housing, and economic opportunities. 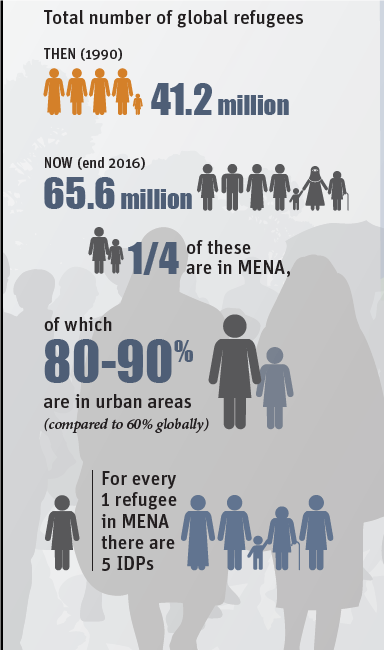 The new face of forced displacement: With the forcibly displaced no longer residing in segregated areas in camps but blending into existing urban populations, traditional programs targeting individuals based on their IDP or refugee status are no longer sufficient. In a constantly evolving urban and social fabric, where the location and needs of host and displaced communities are increasingly hard to distinguish, place-based policies have a central role to play.

Learning how to respond to forced displacement in increasingly urban environments

The World Bank’s urban and social team in MENA has begun to grapple with these issues in a policy note: ‘Cities of Refuge: Bringing an Urban Lens to the Forced Displacement Challenge.’ The policy note sheds light on the issue of forced displacement from the perspective of receiving towns and cities, and provides a basic framework of “how to think” about these issues: 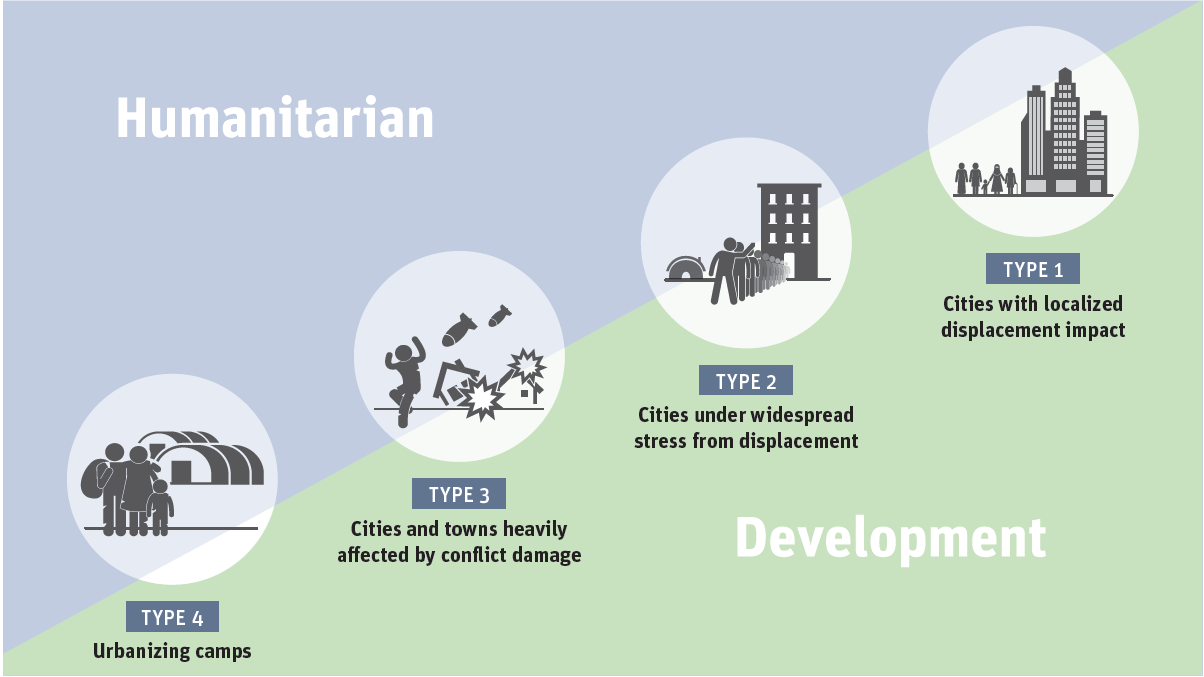 Finally, ‘Cities of Refuge’ is a call to action. The report proposes a menu of concrete policies for managing forced displacement with an urban lens. This entails reshaping the political dialogue around urban forced displacement - by expanding our focus beyond the forcibly displaced, and promoting the welfare of all residents, regardless of origin. It was nice to read that World Bank has come out with the idea of "Crisis based Solution" rather than "Common Solution" for problems of forced migration. If UN and other agencies and Governments who are helping to ease such crisis take the clue from this article the solution offered will be long term solution and will use the aid effectively.
Hope to have similar more articles from your blog.
Shrikant Shah
India.

Thank you Alex for your sharing.
The Cities of Refuge, needs more then the so-called „proven urban development approaches“. if you would allow me, I would like to share with you my modest-opinion after being around in this „industry“. I’d start with Albert Einstein, who stated “We can not solve our problems with the same level of thinking that created them” . “Sustainability” is usually defined as dry, dry, like a Swiss birchermüesli without fruit and milk, cream or yoghurt. In the shadow of the so-called Second Modernism, we have strayed. Where are we wrong? Sustainability, as currently being discussed, is usually an exercise in energy efficiency. We admit it or not, we have crafted a culture-bubble, and and built an environ-mental bubble; and the cities are not immune to this. We need to discard the injectional approach. The challenge today is to reflate the bubble before it bursts. To successfully meet the challenges of the 21st Century, academics and reflective-practitioners both acknowledge the need for an unorthodox, archetype model. For this, I do recommend transdisciplinary approach in thinking, management, and planning. Rather than stigmatising the parts, transdisciplinarly approaches merge the unmergeable; bridging the gap between heart and mind, cultures and people; bridging the gap between ecology and technology, nature and money, bridging the gap between politics and economy, bridging the gap between the seemingly contradictory goals like efficiency and resilience, collaboration and competition, and diversity and coherence. Transdisciplinarly approaches do create bridges where all the disciplines fail. Transdisciplinary approaches provide a more purposeful, long-term SustainAble goal for resilient cities, and affordable, ecological housing for human beings. I believe World Bank is in a position to make difference. There used to be in downtown New York a gallery running under the name "Time is always now". Whenever I hesitate, I think of this slogan; let us not lose our time. This is our call, your call.
Wish you a wonder-full 2018.
Best regards, Siamak

How can I know more about working with to help people in need in my area.