How do city leaders get things done? Learning from mayors in Japan

Also available in: Español | 日本語
The task of mayors and city leaders is no longer limited to providing efficient urban services to their citizens. Job creation is at the forefront of the economic development challenge globally.

Cities need jobs and opportunities for their citizens and the means to generate tax revenues to fund projects that meet their populations’ growing demand for basic services. The WBG flagship report on Competitive Cities outlines how creating jobs in urban areas – urgently but also at scale– is essential.

In November, 2017, we spent a week with approximately 30 city and national government officials and policymakers from several countries, including Argentina, Chile, Croatia, Egypt, Ethiopia, Malaysia, Philippines, Romania, South Africa, Tunisia and Uganda. These leaders represented diverse cities across the world, all with a common objective – how to make their cities and regions more competitive?


Many were dealing with a fragmented institutional landscape, often with overlapping jurisdictions – necessitating clarity of institutional circuits and processes. Some struggled to coordinate economic development strategies with private sector. Lack of adequate sub-national socio-economic data to drive evidence-based policy making compounded issues. City leaders are not looking for a lesson in theory – but evidence of what works and what doesn’t, and practical, implementable examples of how to get things done.

We spent the week as part of a Technical Deep Dive, studying and living the experience of two exceptional Japanese cities - Yokohama and Kobe. These cities have dealt with:

WHAT needs to be done?

City leaders use a menu of interventions to increase competitiveness, including institutions and regulations, infrastructure and land, skills and innovation, and enterprise support and finance. Mayors directly influence several of these factors, and they work with regional and national level leaders to shape other levers.

A common theme was that long-term job growth was usually driven by tradable sectors. For instance, Kobe reclaimed land and crowded in investments into a life sciences cluster, to bridge medical research and commercialization. Over fifteen years, the cluster attracted over 500 companies, outperforming that in Singapore – a city of roughly six times the population. Yokohama invested in physical infrastructure, to restructure its economy – from port and heavy-industry led to frontier research and development. 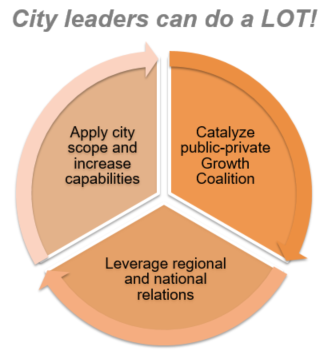 The extent of city policy mandate and resource availability differs greatly from their national counterparts, but also across cities. Public policy makers in cities are actors in a complex web. They can systematically increase their ability to influence by finding and creating allies and marshalling information.  Yokohama and Kobe responded to their limited policy ‘wedge’ by systematically finding ways to expand it. They recruited allies that could expand their capacity, building powerful coalitions for growth along the way.

HOW will it be done?

City leaders recognize that an economic development strategy alone is insufficient. Implementation mechanisms and delivery systems are equally (and perhaps more) important to achieving the desired results.  Both Japanese cities, Yokohama and Kobe, carefully and patiently built institutional capabilities to design, implement and manage. This included the ability to execute the basic tasks of projects – whether procurement, hiring, asset disposal or similar; the ability to accumulate knowledge – systematically noting what worked, adjusting plans and trying new ideas; and the ability to coordinate –to mobilize stakeholders to clear blockages when they arose in implementation.

The interaction with city leaders coupled with practical exchange across peers has presented World Bank teams with an overwhelmingly important question – what are the pathways to economic success across different types of cities? Given the huge differences in challenges, contexts and capabilities, what will it take to put city leaders in the driving seat of competitiveness? Our future efforts will continue to focus on helping cities better design, manage and implement policies, programs and projects. Understanding learnings from Yokohama and Kobe’s experiences will help to tackle the challenge. ...bringing concerned institutions into a single umbrella has remained a major issue in these parts!

We understand that Japan is a few generations ahead of other developing countries like India. But we should find the ways to curb pilfereges and overuse of natural resources.

Should we share poverty ? When the local communities have no enough money/capital for fulfill the basic needs or you cannot use it for the proper investments because of the daily costs it is always a demanding challange . All of us know what the future will bring (e.g.climate change, ageing population) for us, but the urgent needs are stronger for them. The local citizens can make dicisions: leave the daily problems behind and move to other places or try to solve your own problems without the help of the local authorities if you can. It would lead to two groups: services provided by the government or by the private sector. In this case services provided by the government should be free of charge or low fee should be paid by the citizens and run on low cost covered by tax incomes. The real challange how could you reduce costs without decreasing the quality of the services provided (sustainable healthcare, building reconstructions, food safety etc.) ?

learning from the Mayors in Japan will help us improve our cities in Liberia.