There are otters in the city 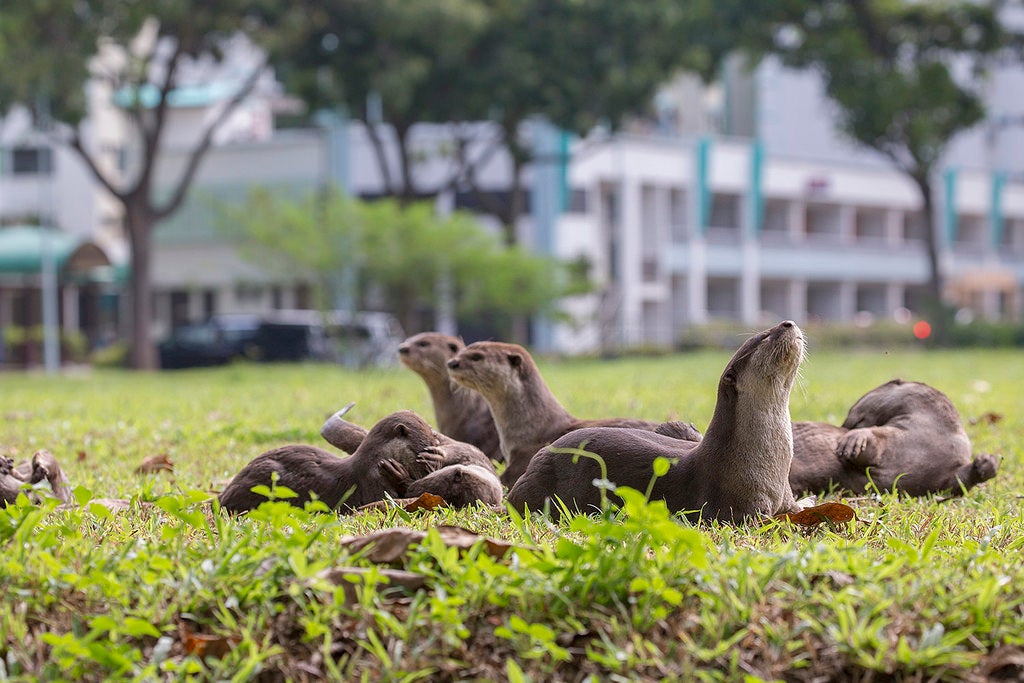 When a family of 10 smooth-coated otters appeared in Singapore’s urban downtown of Marina Bay last year, the city was ablaze with excitement and delight. Who would have thought that these otters would make a dense urban environment like Singapore home? After all, otters were thought to have vanished in the 1970s as Singapore rapidly developed into a dense metropolis.

Was this a fad? Probably. Was this a big deal? Absolutely. In a small city-state where land is considered a scarce resource, the tension between urban development and biodiversity conservation can be very pronounced.  This was not the case in Singapore. Between 1986 and 2010, as Singapore’s urban population doubled from 2.7 to 5 million, its green cover also increased from 36% to 50%, all within the confines of just 710 square kilometers. The increase in green cover in urbanized Singapore was seen as a sign that the efforts by the urban planning agency, parks and water management boards had paid off, and a testament that the natural environment could be indeed be integrated effectively into the urban fabric of the city.

Today is World Environment Day. This year, it celebrates the theme of “connecting people to nature,” and invites us to think about how we are part of nature—and how intimately we depend on it.

The pursuit of integrating cities and connecting people with nature is nothing new – the garden city movement of the late 19th century called for self-contained communities surrounded by greenbelts, and urban planners’ and architects’ fascination with vertical garden cities and urban parks have existed for some time. One of the most vivid examples is New York’s six-acre Central Park set in a city of 8.5 million. Today’s “eco-cities,” “sustainable developments” and “green cities” often feature ample public spaces ith elements of greenery, waterbodies, and biodiversity integrated with communities and work places, blurring the dichotomy of what is “built-up” and what is “nature.”

A brief survey of cities around the world, however, suggests that connecting cities and people with nature continues to be a big challenge. Despite many successes, there are countless examples of urban agglomerations that have destroyed their surrounding natural environment, let alone to co-exist. The pressure of accommodating increasing populations, land-take requirements, and the resulting pollution and waste that accompany urban development often forces nature out. Mature forests are cut down to make way for city expansion, and waterways are used as conduits for waste.

[Watch a video and read a report to learn how a degraded urban wetland in Uganda affects economic growth and human livelihoods, and what can be done to protect the environmental assets in Africa’s cities.]

But, attitudes have evolved. The heightened awareness of the urgent need to address global warming and climate change, pollution and disaster risks—as well as the benefits of compact and green, low-carbon cities—have placed more importance on why human populations must live in harmony with nature. Having a clean and green natural environment in and around cities gives us space for respite and recreation, provides psychological breathing spaces, encourages healthy living and improves well-being, improves drainage and water quality, reduces urban heat islands and energy consumption, and act as carbon sinks.

Beyond the inclusion of greenery and water bodies, many cities today now look toward biodiversity conservation, low-impact development, and urban design that integrates building and greenery  as part of urban planning and development. Compact cities such as Barcelona, has a dedicated agency for urban ecology focused on integrated sustainable solutions related to biodiversity, urban planning, mobility, energy, waste management, water management and social cohesion. There continues to be a huge potential for people, cities, and nations to leverage on and unlock their natural assets. For example, a recently launched report points to a series of policy actions to green Africa’s cities. Even densely populated urban areas—ones that are often associated with polluted urban environments, lacking in urban greenery and clean waterbodies—have a lot to gain by protecting their natural environment. This, however, requires willingness and a concerted effort—by governments, civil society, researchers, and businesses—to make meaningful changes, to act now to preserve, and to reconnect people with the natural environment.

Not only can we protect and respect the natural environment by ensuring cities are better planned and managed, we can also enhance urban environments by making nature work for cities, people (and otters).

In support of this, the World Bank Group is working with countries around the world to help build resilience to the growing environmental, economic, and social challenges they face today.  The Bank is working in partnership with the private sector, governments, and civil society in developing urban development strategies to build clean and efficient cities and communities that protect the environment and environmental assets and are resilient to natural disasters, and to create competitive economies that provide new kinds of jobs for people and ensure that everyone, especially the poorest, can benefit.