Why Does Cargo Sit So Long In African Ports? Not Just Poor Infrastructure… Poor Incentives 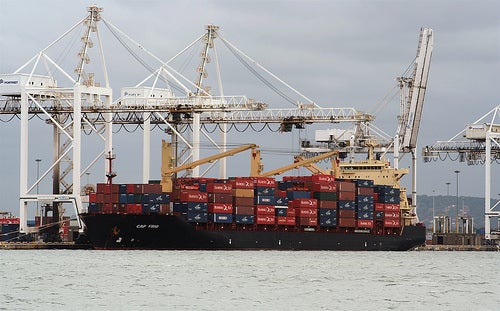 A major factor holding back African development is the time it takes to transport goods within the continent. Though road conditions are poor in much of Sub-Saharan Africa, research has shown that ports are major contributors to transport delays: Cargo traveling from a port to a city in a landlocked Sub-Saharan African country generally spends more of its time (75 percent) at the port than on the road. Cargo spends nearly three weeks on average in Sub-Saharan African ports, compared to under a week in large ports in Asia, Europe and Latin America. This has hurt the region’s economies and deterred the development of value-added industries that rely on time-sensitive supply chains.

While some of the blame for these delays rests with insufficient infrastructure and government inefficiency, it turns out that private-sector behavior may be responsible for key aspects of the problem. In World Bank research to be presented at the International Monetary Fund (IMF) next week, we show that a large portion of dwell time can be explained by collusion between controlling agencies, port authorities, private terminal operators, logistics operators, and some shippers. This suggests that governments and donors hoping to make trade more efficient in Africa should look beyond big infrastructure projects and instead work to disrupt the private sector’s collusive, short-term strategies in port use and operations.

A common assumption holds that the private sector (terminal operator, customs broker, owner of container depots, shipper) has an interest in reducing the amount of time cargo sits in ports. This idea has led the international community to champion such solutions to port delays as privatization of container terminal operations and increased investment in cranes, deep-water berths and other infrastructure improvements. But a close examination of ports in six Sub-Saharan African countries – paired with original data from firm surveys – suggests that the some importers, brokers and port operators often have an interest in maintaining practices that contribute to port delays.

The data shows that the bulk of port delays come from transaction and storage time, rather than poor handling or operational issues. Importers in Sub-Saharan Africa often have strong incentives to use ports as storage areas. At the Douala port in Cameroon, for example, the port – not external storage facilities – is the cheapest option for an importer storing goods up to 22 days. This causes congestion and inefficient use of port space. In addition, terminal operators, who earn large revenues from storage, also benefit from long waits and have little incentive to reduce dwell time.

Firm surveys also show that companies may use long dwell times as a strategic tool to prevent competition, similar to a predatory pricing mechanism. Incumbent traders and importers, as well as customs agencies, terminal operators and owners of warehouses, see a benefit to long cargo dwell time because it generates additional profits by acting as a strong barrier to entry for international traders and manufacturers. The most important losers are the consumers, who have to pay the price of multiple rents.

One example of good practices that emerged from the research was the case of the Durban Port in South Africa, which is state-run. There, the port authority and customs administration put pressure on the private sector to reduce delays. Among the steps they took were to levy prohibitive charges for storage, strictly enforce storage limits, and offer the option of pre-clearing goods with customs before arriving at the port. These measures, as well as strategies enacted by a public-private port committee, helped transform the port. In the 1990s, it was notorious for long berthing times, queues of trucks waiting for cargo and an overall dwell time of six to seven days. Today, 90 percent of the cargo at the Durban Port is cleared within three days, and the average dwell time has been reduced to 4 days.

The case studies, survey data, and evidence from the Durban port turn-around suggest that donors should re-think trade facilitation intervention strategies in Sub-Saharan Africa. Rather than focus on large infrastructure projects or changing ownership of container terminal operations, reform should address some of the perverse incentives for harmful private-sector behavior. Indeed, governments will need to recognize that large-scale investments in infrastructure are not sufficient to reduce logistics delays and can even be harmful by perpetuating bad incentives. Decreasing dwell times in ports will ultimately require governments to combat collusive practices between some private sector actors – importers, brokers and operators – and some civil servants in customs and controlling agencies and port authorities. Poor ports infrastructures and minimal ports investment by the government

I saw a video on youtube the other day featuring a truck driver in southern Africa, and he talked about how he and his colleagues patronize more sex workers/"girlfriends" the longer they are forced to wait at border crossings. I wonder if the costs of port delays include the further spread of HIV.

The article is on point and thanks to the author. I am based in South Africa and I have worked in the Marine environment for 7years. I would always get frustrated of how things are done. Hence I have resigned and formed an initiative to host all parties in the industry to have meaningful and decisive conversations to improve infrastructure for our country and surround.

This should be a must concern for the authorities. It should not be taken for granted. We want actions.