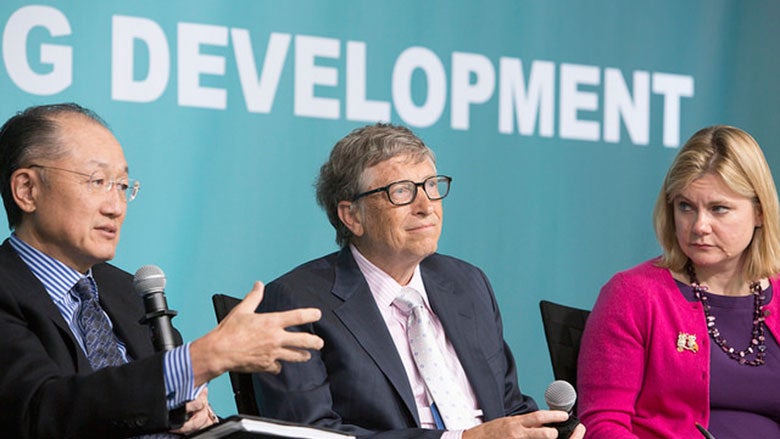 What would be a game-changer for achieving some of the world’s most difficult goals — such as ending poverty and hunger and making sure every child gets a quality education?

Billionaire philanthropist Bill Gates came to the World Bank Group Spring Meetings to answer that question in a thought-provoking conversation about how to finance development for greater impact.

“I think the first thing is to make people know the game is working — that is, development is lifting up lives, and this commitment needs to be maintained,” said Gates at A New Vision for Financing Development, livestreamed in Arabic, English, French, and Spanish on the last day of the Spring Meetings.

The conversation, moderated by BBC correspondent Michelle Fleury, ranged from how to make development less risky so the private sector will invest to the need for strong, transparent tax systems and financial inclusion, to how to fund the Sustainable Development Goals and the power of trade to reduce poverty.

Gates gave a strong endorsement of the World Bank’s fund for the poorest countries — known as IDA — mentioning it several times during the discussion. IDA, he said, has been “an absolutely critical element” in development.

The fund provides grants and zero- to low-interest financing to the poorest countries and more rarely is used in middle-income countries. The World Bank recently approved concessional financing for Jordan, for example, to help it host more than a million refugees from Syria — an action many consider a global public service.

Kim said such “concessional financing” can help achieve bigger goals by encouraging the private sector to invest in, for instance, renewable energy rather than coal, thereby reducing its cost.

“We need to have that conversation — what are the most important things we want to accomplish? When we’re close to eradicating polio, for example, we can’t give up on it because the rules won’t allow us to do it.”

Addressing risk is very important, said Terkper, along with looking for non-traditional ways of doing things.

Panelists agreed that mobilizing domestic resources — in the form of taxes — is a big part of the solution to financing development.

Rajan said developing countries need to improve their ability to mobilize these resources, but the task is difficult when “some of the wealthiest people in our countries have money in places where it’s hard to get it back.”

“I think it’s very important to make sure our money stays onshore, rather than offshore.”

Greening said there should be an international agreement on offshore banking — something the G8 explored in 2013 while under the UK presidency, she said. Efforts to make tax systems more transparent “need to go hand in hand with efforts to tackle corruption,” she said.

For Greening, women’s empowerment would be a development game-changer. “The states in India with the fastest growth are where women can be economically active,” she said.

Kim said countries often don’t want to invest in the “soft things,” such as nutrition and quality education, even though, for growth, “the one thing that you can count on is human capital. “

But overall the world is moving in the right direction, said panelists.

“If you take a 50-year, 25-year perspective, the progress in uplifting countries has been quite phenomenal. If you look at the economic measures, health measures, governance measures, a lot of great things have happened. And you’d expect in the next 25 years, we should be able to do even better,” said Gates.

“We have constant innovation — whether it’s a malaria vaccine, or a new seed that’s drought-resistant. ... All of those tools could be made available to developing countries.”