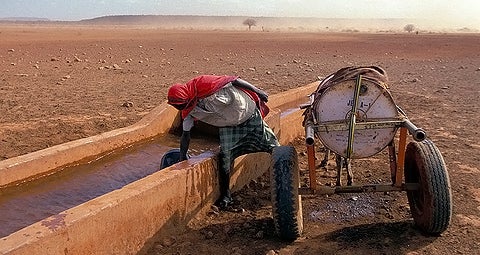 This week in Doha, the marble corridors of the Qatar National Convention Center resonate with voices from around the world. Over half way through the UN Climate Change Conference, as ministers arrive and the political stakes pick up, a sense of greater urgency in the formal negotiations is almost palpable. But in the corridors, negotiations are already leading to deals and dreams and action on the ground.

UN Secretary-General Ban Ki-moon opened the discussions by saying we need optimism, because without optimism there are no results. He reminded us all that Superstorm Sandy was a tragic awakening. He reiterated the call for a second commitment period of the Kyoto Protocol, a global agreement and 100 billion in climate finance by 2020.

Meanwhile our focus was firmly on the region ...

When we look at the Middle East and North Africa, the challenges of climate change are evident. Farmers have been planting in drylands and dealing with climate variability and water shortages since the beginning of agriculture. They understand adaptation here, but no one is prepared for what we could face if the world doesn’t act to stop human-induced climate change now.

We published a report last week examining the science of climate change, and the findings should be alarming to anyone. If governments don’t take action to reduce greenhouse gas emissions, globally we’re headed for a 4 degree Celsius increase. The rise will be even higher across the Arab world, and the effects on water, agriculture, and livelihoods will be far more pronounced than what people here already face. Climate models show that over the last 30 years, temperatures in the Middle East and North Africa have increased 50 percent faster than the global average.

Aggressive mitigation is needed to slow greenhouse gas emissions, but here and in much of the world, adaptation is now critical to survive the changes that are already underway.

In a new report released today, Adaptation to a Changing Climate in the Arab Countries, we draw on the knowledge and expertise of the Arab world in adapting to changing climates. The authors, the majority of whom are from the region, consulted with civil society, academia, and governments, and worked in partnership with the League of Arab States.

They came away with three main conclusions from the Arab experience:

Climate change affects everyone and everything – things like city design and management to urban transport, water services and food supply. These are things that affect people’s daily lives and for which political leadership is essential. In this region as elsewhere it is the poor who are the least resilient and who will suffer most. Investing in functional social safety nets will be one of the most important responses.

This is already underway in parts of the Arab world. Saudi Arabia is looking at new pricing and allocation of water. We’re working with Yemen to rehabilitate traditional system of terraces for collecting and harvesting rain water. Morocco is integrating climate policies into its national agriculture strategy, Plan Maroc, developing concentrating solar power, and preparing to steer an overall course toward green growth.

Alexandria’s population of 4.1 million is expected to surge to 6.8 million by 2030, and the risk of flooding will grow with it. With clear urban planning, land use rules, and early warning systems, the city can mitigate the danger. Similarly, Casablanca, expected to grow from 3.3 million to more than 5 million by 2030, will need to rehabilitate is low-lying slums as sea levels are expected to rise by as much as 20 centimeters.

The positive news is that the formula for building up resilience has the same essential ingredients that should be in every development plan: inclusive and sustainable, long-term development that reduces poverty and spreads prosperity.

At the World Bank Group, we are working with our clients to put inclusive green growth policies in place as the path to sustainable development, focusing on building economies that are more resource efficiency. It’s also the path to attacking emissions and building resilience.