To End Extreme Poverty, Learn from a Small Village in India 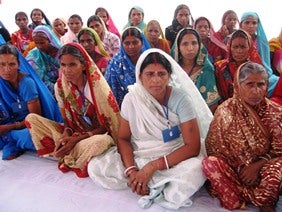 "Five years ago, I was no one," said Kunti Devi to me, sitting up straight against the wall of her one-room mud hut in Bara, a small village in India's eastern state of Bihar. "Now, people know me by my own name, not just by the name of my children."

I was sitting on the floor, across from Devi, a mother of eight, who belonged to one of the most vulnerable and socially excluded castes in India. She recalled how when her husband got injured and lost his job a few years ago, the family was pushed over the brink — from subsistence to hunger and poverty. At the time, Devi took a bold step for a poor woman used to living in the shadows of society. She joined a women's self-help group in her village and took a small loan to raise goats. With the income she generated, she repaid her first loan and took another one — this time to lease land to produce grain. She borrowed again when her family faced a health crisis. Today, Devi has several sources of income. She is also planning ahead. She wants to open a food outlet on a busy road. And now, with two of her sons married, she wants to find a larger living space for her growing family.

To be sure, Devi and the women in her self-help group still have a long way to go. Yet this is a remarkable story of empowerment through collective action. To me, the confidence these women had cultivated over time carries as much currency as their earnings. It inspired them to organize themselves and work hard toward building a better future. And this is precisely the objective of the World Bank-supported project in Bihar: to empower rural communities where the poverty rate stands at a staggering 55%. Since 2008, some 700,000 households have joined self-help groups under the program.

The story of Bihar itself is a remarkable one. With a population of 100 million people, Bihar is India's poorest state. Average income is $294 per year, less than all but two Sub-Saharan African countries. For many years, Bihar was known for poverty, corruption, and a society deeply divided by the caste system. Then in 2005, under the leadership of Chief Minister Nitish Kumar, the government launched an ambitious development program. It invested in roads, public health care, and school systems. It even gave bicycles to girls as a reward for staying in school, which resulted in a fall in dropout rates. And economic growth outpaced the national average, reaching 13%.

But despite these impressive achievements, Bihar continues to face daunting challenges. During my visit, Kumar, now in his second term, told me that more rural roads were needed to connect smaller communities to markets. He also wanted to invest in secondary education for girls. Maternal mortality rates remain stubbornly high, with far too many women dying during childbirth. And more than half of children under 3 suffer from malnutrition. Furthermore, the government’s capacity to implement the programs continues to be weak.

Despite the fact that India remains home to one-third of the world's poor, I believe that the country — and especially Bihar — is proof that development works. India’s story of economic growth and human development in recent years shows how millions can be lifted out of poverty. In April, World Bank Group President Jim Yong Kim put forward an ambitious goal to end extreme poverty — people living on $1.25 or less a day — by 2030. This will require enormous global efforts — not just in poor countries, but also in emerging economies where large numbers of the poor are concentrated. And it cannot be done without India.

That is why the World Bank will focus its efforts and resources on states like Bihar. Responding to the challenges Kumar described requires tailoring our approach to meet the specific needs of low-income states by developing innovative programs; deploying experienced staff in those states; and working closely with local institutions to help them deliver the services their citizens need.

India's success in lifting its people out of poverty matters to the rest of the world. Other developing countries can draw from its experience on what works and what doesn't in public policies, governance and accountability frameworks, and development practices. They can learn from the transformation of lives — like those of Kunti Devi and others in her self-help group. Only when we can help replicate their stories will we be able to see a world without extreme poverty — in our lifetime. A great example of how poor people can be lifted out of poverty. Same is the story with self help groups in Andhra Pradesh, another state in India. I applaud the commitment and the mission of world bank to help mankind live like human beings! There is a lot to be done not only in India and in other parts of the Globe. The world bank should get support and donations from the richest peopl of the Globe and use the funds for uplifting the poor.

I am proud of the leadership of Mr Nitin Kumar in Bihar, a bimari state.There is visible improvement in infrastructure development.But employment rate is low and migration of youth to southern states is alarming.Quality of life in rural Bihar is abysmally low.Society is divided based on caste and religion.Literacy is low.It is noteworthy to note the establishment of self help groups.Wonders are done in Kerala by the self help groups"Kudumbasree" in terms of women empowerment and financial security.

Thanks for this information. its important to all of us indians to know about it. i urge you to give some more information to all of us about the works as it is not possible for us to know these things in such a detail.

Dear Sri Mulyani,
Kudos for bringing out the success story of economic progress and empowerment from the state of Bihar. The economic progress in terms of GDP growth in Bihar is remarkable at 13%. However the 13% growth has not reached to the all 55% rural poor living in abject poverty. Similar is the storey for India. Despite of economic progress, the results are that the malnutrition, morbidity and mortality have not significantly reduced. I think the biggest challenge that we face in poorer states of Bihar, Odisha etc and in India in general is the re distributive justice. The power over the resources increasingly are concentrated in the hands of very few and the benefits of progress accrues them instead of a collective. We are still caught up with a lot of social barriers of caste,poor education, poor health. Therefore the real challenge is to bring about inclusiveness by investing heavily on primary health, elementary education, rural infrastructure, agriculture etc.
Hope to have such inspiring stories in future
Thanks and regards,
Rabi Narayan Parhi

Devi's story is indeed remarkable and an exciting case of development to draw from.
I must add that, my thoughts lingers around the reasons for the weak economic strides of Bilhar. Also a multi facet approach to development is more comprehensive towards proper development. The difference between Devi and Bilhar probably the positive action or resolve to change situations despite the challenges.

Inspiring,i work with self help groups and this is a methodology that all the stakeholders of MDGs implementation should not dare to ignore. its workable

This is something that Nigerian government can learn from, with the large level of disparity in income, at least with schemes like this we can foster growth.

There are several such cases in Andhra Pradesh where self help groups have earned incomes and maintaining their families from down trodden commmunities.They are exporting their goods .world bank should discover such cases also.

Microfinance has, and is still the most efficient vehicle in poverty eradication. The experiences in india and other parts of the world, are important in generating sustainable and efficient microfinance programs, especially in Sub Saharan Africa.

SHGs are very powerful groups to adress the the principle of the co-operation and mutual assistance. Farmers / Women SHGs from the village Pimpari Gavali ( Tal- Parner, Dist Ahmednagar, Maharashtra, India) showed to the rest of the country that what SHGs can do?. These SHGs purchased moving earth excavator of the worth 4.5 million INR for the watershed and rain water harvesting in their own village. for more details see @ http://en.wikipedia.org/wiki/Pimpri_Gawali

India is a very highly respected country for its political system. However, In my view the poverty is so visible from its social structure to ordinary homes, that it is unbelievable? Whatever, one may say, the system does not provide for equal opportunities.

It is realy true i know verywell kunti devi i support to kunti devi to achieve the destination when i was working in jeevika project. i am realy happy.

We at PRADAN begin our engagement at new villages by promoting women's Self-help groups.For the more mature SHGs, PRADAN helps them establish collaborative linkages with banks in order to leverage credit that, in turn, meets member’s needs for larger funds.
For more information please visit www.pradan.net

The Government of Nitish Kumar has to do the following :
1) Build Primary Schools in every village
2) Build Technical Training schools in every district
3) Construct roads
4) Electrify villages
People will develop themdelves. Just give them the infrastructure.