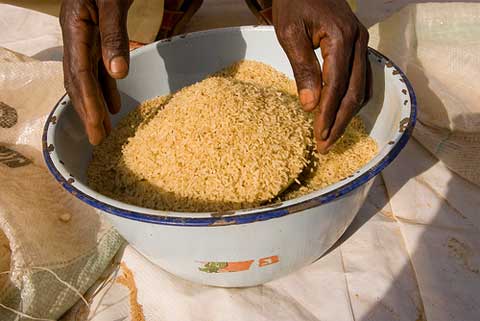 The numbers are jarring: Global prices for key food staples such as corn and soybean were at an all-time high in July 2012, with corn rising 25 percent and soybeans 17 percent in a single month.

Globally, food prices jumped 7 percent between April and July. In some countries, people now pay more than twice as much for sorghum [1] as they did a year earlier, the latest issue of the World Bank’s Food Price Watch shows.

This is expected to hit certain regions with high food imports, such as the Middle East and much of Africa, especially hard.

We’re looking at a significant price shock, but does that mean we’re headed for a food crisis similar to the one we experienced in 2008? World Bank economist José Cuesta, the author of the quarterly Food Price Watch report, gives his perspective on the situation.

The immediate cause is weather. We’ve had an unprecedented drought in the United States and extremely dry weather conditions in Europe; especially in Russia, the Ukraine and Kazakhstan. But there are other factors, too, that contribute to this huge price shock – including low food stocks.

In the case of rice and wheat, most of these stocks are low because they’re not liquid, meaning some key producers use the stocks for themselves to feed their growing populations. This lowers the global availability to rice and wheat for trade.

In the case of corn, a substantial portion of harvests in the U.S. is now used to produce biofuel, which affects the price of corn for food. But we don't yet have conclusive evidence showing how big of a role biofuel plays, or to what extent other factors affect corn stock levels and price.

2. When will we know if the high food prices will become a food crisis?

There is no universal definition of a food crisis. We can’t be sure when it begins or when it ends. But it’s true that prices were high in the beginning of the year, and they’re even higher now. They’re also volatile.

Once we know what the El Niño weather pattern does, we’ll have a clearer idea. El Niño can cause severe floods in one part of the world and drought in others, which can devastate harvests.

And once we have a better sense of policy – for example whether some large food-producing countries will erect export bans in reaction to the high food prices – we’ll be able to say with more confidence whether this is turning into a food crisis such as the one seen in 2008.

3. What regions and countries are most sensitive to a spike in food prices, and why?

The most vulnerable countries are those that are most dependent on imports of grains for their consumption. They’re also countries where many households, and especially the poor, spend a large portion of their household budget on food.

Such regions are primarily in the Middle East and North and Sub-Saharan Africa. Countries in those regions also tend have weaker safety nets and limited fiscal opportunities to finance mitigation and preventive policies.

4. Are countries prepared to deal with the rise in food prices?

Some are better prepared than others. Those with better safety nets will do better. So will countries that invest more in agriculture, because they can boost productivity, produce more varied food and be less exposed to international shocks.

There are also some countries – Mexico and Ethiopia, for example – that have weather-indexed insurance policies. So whenever rain fall reaches a certain level that will affect the next harvest, this insurance kicks in.

5. So what happens next? How can we avert a crisis?

There are things countries can do, and things international organizations such as the World Bank can do.

Countries, again, should look at creating safety nets such as conditional cash transfer programs and emergency employment schemes so immediate short-term mitigation can take place.  This is something we here at the World Bank continue to advocate for.

Longer-term, they need to invest in agriculture and improve their yields, and make sure there’s open trade so they can go to the international markets to smooth these shocks.

What the international community can do is to activate certain finance mechanisms that assist countries vulnerable to food insecurity. The World Bank has programs such as the Global Food Price Crisis Response Program that offer emergency support.

There are also several longer-term initiatives under way here at the Bank to address food security and nutrition challenges.

The SecureNutrition Knowledge Platform, for example, brings international partners together to promote agricultural interventions that have better nutrition results. And we’re working to improve our monitoring of unfolding food crises through a first-of-a-kind food price monitoring tool that will track international and national food prices and the capacity countries have to respond to price spikes.

If you have additional questions on food prices, leave them in the comments section below. If global food <a href="http://prices.co.in/">Prices </a> increasing rapidly defiantly food crisis will happen. Already some countries facing this problem .

I would be interested in your opinion on GMOs and the possible role they could play in food crises (more resistant crops, agricultural diversification, yields)?

Thank you in advance,

Why the domestic prices have soared so sharply in Mozambique (113 percent in maize) and Sudan (180 percent in sorghum)?

Should the US and other developed countries stop using/processing biofuels to force crop prices down?

Also, with news that banks are betting on and making money from the food crisis, is there anything we can do to stop a run on food?

You mention in your 5th response: "Longer-term, they need to invest in agriculture and improve their yields, and make sure there’s open trade so they can go to the international markets to smooth these shocks."

It seems to me that this is not correct. If the price volatility is coming from abroad (say from droughts and a negative shock to the World supply), connection to the international market will transfer these high prices to the local market.

That being said, in the long run farmers might benefit from greater integration to world markets in general, to acquire cheaper inputs and things they can't produce cheaply.

I wonder what your thoughts are on this.

Countries should make their currencies from edible protein. When the food runs out money will be worthless except for eating. Humanity needs intelligent leadership, not the greed and avarice present in today's leadership.

José Cuesta will respond to questions in a follow-up blog we plan to publish next week. So please let José know what else you want to know about rising food prices! He's looking forward to your questions.

Three months ago (last May!) India was struggling with bumper grain harvests that had completely flooded it's stores. Millions of tons of grain were rotting in the open as the Monsoon arrived. In June, China too had predicted high grain production with a record nine years in a row increase. The US, too, had similar predictions. Africa too has some sporadic reports of bumper harvests going to waste due to poor storage.

Begs the question, why should prize increases arise if bumper harvests are everywhere? The finger points only to the prospector who manipulates availability and actaul gate prize and thus the retail prize that the consumer is faced with at the supermarket tills. Harsh weather (Monson floods or drought or critical temperature inversions) come and go; but the farmers' spirit is more resilient. Food prizes need never spike as the farmers never take time off their career. And neither is grain production for biofuels the cause- it is just the scapegoat.

Someone somewhere always benefits from the prize spikes without a sweat out in the field.