The Landscape for Forests after the Forum 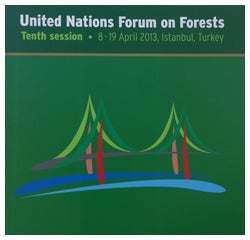 A couple of weeks ago, I blogged about the opening of the 10th Session of the United Nations Forum on Forests, in Istanbul, and Turkish Prime Minister Recep Tayyip Erdoğan’s impassioned challenge to the global community to get serious about stopping the loss of forests. Unusually, he did this without reference to the usual concerns about climate change or biodiversity loss, but instead quite simply said – we have a moral responsibility to stop this.

"The global threats which humanity faces eliminate the luxury of saying, ‘What do I care?’” Erdoğan said. “We are not only creatures of bodies, heads, and brains. We carry hearts, we carry souls, and we carry a conscience.”

So what did the UN Forum accomplish after days of discussions and negotiations?  Did the Forum rise to Erdoğan's challenge?

In a word, “yes,” though one could be forgiven if this was not immediately obvious.  The slow convergence of views in these types of negotiations, where bracketed text eventually gives way to clearer insights and concrete action is not always easily evident.

But UNFF10 concluded with two resolutions: one laying out a plan for how forests will be handled in the post-2015 development agenda; and the other calling on UN member states to better integrate forests in their economic development strategies, in part by better accounting for the goods and services forests provide and developing more coherent policies so that growth does not come at the expense of forests.
I suppose this doesn’t sound Earth-shattering, but the power of these resolutions is that they provide validation for our own work on things like WAVES and natural capital accounting and give governments the tools to encourage bureaucrats and politicians alike to take clearer action to support forest conservation and management.

There is still progress to be made.  Notably absent from any of the resolutions were extensive references to tackling challenges of sustainable forests management from a landscapes perspective, partly because the concept is not well defined or widely understood. One of the two final resolutions encouraged the adoption of cross-sectoral approaches toward sustainable forest management "at a landscape level in countries that recognize it."

At side events, however, the idea that forests are part of a broader physical and economic landscape that goes beyond the purview of state forest agencies met little resistance: