Long Live The Internal Market! (But How Competitive is the EU?) 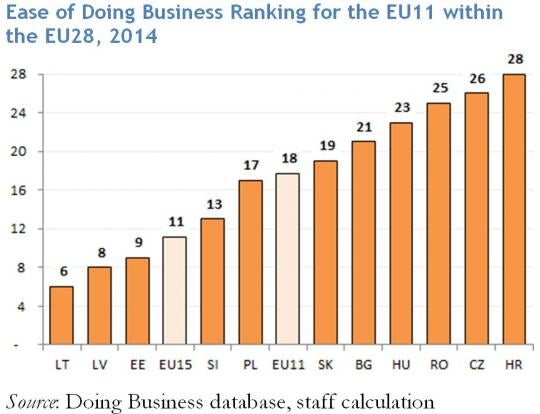 A vibrant private sector - with firms investing, creating jobs, and improving productivity - is absolutely essential for promoting growth and expanding opportunities. In order to support the private sector, however, governments need to step in and remove obstacles to growth and job creation. Although macroeconomic stability and sustainability are unquestionably necessary for spurring business activity, the quality of the business regulation also matters.

Collectively, the 10 indicators in Doing Business 2014 are a great tool for assessing the ease of doing business in countries and measuring the quality of their regulations.

The results can be surprising for some countries in the European Union (EU): Would you ever consider that the most difficult country to start a business in the EU is Austria? That Italy is the worst place to pay taxes?  That one of the top countries in protecting investors is Slovenia? Or that Poland is the global runner-up in proving information about credit?

Drilling deeper, it is also possible to get a nuanced view of how different regions within the EU itself are doing. For example, by coupling Doing Business with the latest EU11 Regular Economic Report, one can get a clear picture that the countries in that region are generally lagging behind other EU countries in terms of business regulation. Looking more closely, one can identify three groupings of countries and their collective performances: the Baltic countries - in the top 10!; Slovenia and Poland - above average performers (and showing rapid improvements as of late); and the rest of EU11 countries - in the bottom third of the European Doing Business rankings.

While large improvements have been made in the EU11 region, the reform agenda remains unfinished. Looking at the “traffic light” table, we can see where the EU11 countries are performing comparatively well and where reforms might help to boost competitiveness. For example, courts in the EU11 are affordable, but the average time to enforce contracts (580 days) is still long, especially compared to the 300 days it takes in Lithuania and Sweden. This means that a company that is disputing a commercial case has to wait for more than a year-and-a-half. It also takes an average of 2.5 years to resolve insolvency and over 180 days to deal with construction permits (its over 280 days in Romania and Slovenia). Companies are also spending too much time compiling their taxes - over 400 hours in Bulgaria and the Czech Republic, compared to around 80 in Estonia and Ireland.

Thus the Doing Business indicators help to highlight good performance as well as areas that need attention if countries want to attract private investment and growth.

However, while these indicators come in handy when trying to understand whether something is wrong, they fall short in helping to illuminate exactly what is wrong and how wrong it is. Usually the fundamentals behind the indicators are much more difficult to address than the indicators themselves. This is not done by fixing the indicators alone; instead, it may be better to try fixing the fundamental problems, which will then fix the indicators.
Countries
Bulgaria
Croatia
Czech Republic
Estonia
Hungary
Latvia
Lithuania
Poland
Romania
Slovak Republic
Slovenia
Regions
Europe and Central Asia