The Poor, the Bank, and the Post-2015 Development Agenda 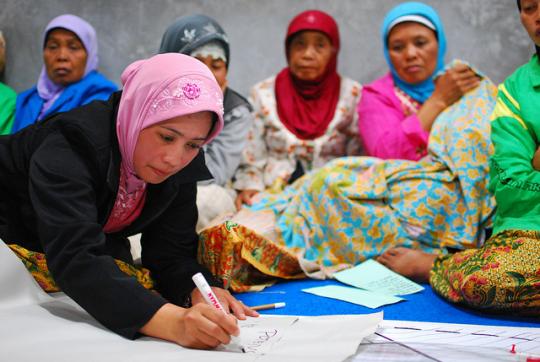 Fifteen years ago, the international community designed the Millennium Development Goals, including that of halving extreme poverty, through a process that mostly took place in New York, behind closed doors. A few years earlier, the World Bank had developed the guidelines of the Poverty Reduction Strategy for Heavily Indebted Poor Countries from Washington, D.C. in a similar fashion.

Fortunately, this approach has changed.

Today, the process of identifying and consulting on the post-2015 development agenda has been opened to the general public including, importantly, those whom the goals are expected to serve. In fact, the United Nations and other partners have undertaken a campaign to reach out directly to citizens for ideas and feedback on the issues most important to them in the post-2015 agenda. Those who are formulating the post-2015 goals will no longer need to assume what the poor and vulnerable want: they will have a firsthand knowledge of what their priorities are.

The World Bank Group has explicitly stated that our new goals of eradicating extreme poverty and boosting shared prosperity cannot be achieved without institutions, structures, and processes that empower local communities, hold governments accountable, and ensure that all groups in society are able to participate in decision-making processes. In other words, these goals will not be within reach without a social contract between a country and its citizens that reduces imbalances in voice, participation and power between different groups, including the poor.

But this was not always the case. In fact, the role of the poor in development has steadily changed over time, although perhaps not as quickly as we may have wanted. The poor are no longer simply in a passive role, as recipients of assistance — they are now at the center of both economic and human development. The Poverty Reduction Strategy that I mentioned earlier opened the door for civil society to have a seat at the table with authorities in places where dialogue had been not an option until then. The World Bank’s “Voices of the Poor” and “Listening to Africa” initiatives, among others, took a step further in our work to better engage with and understand those living in poverty and in vulnerable situations. Today, the World Bank Group unambiguously supports a strong voice and participation of the poor and the most vulnerable, and is actively engaging with stakeholders to ensure that these critical voices are included in decisions that affect them.

One example, in Belo Horizonte, Brazil, is a World Bank Development Policy Loan on inclusive urban development that helped develop a participatory budgeting channel, resulting in 10% of the municipal budget for urban development being allocated through direct citizen engagement. The long-term municipal strategy “Belo Horizonte Vision 2030,” with 12 results areas and 25 objectives, was also developed in that participatory way. Similar examples can be found in the Democratic Republic of Congo, Cameroon, and Dominican Republic. And there are many more examples – from online urban transport public feedback in Beijing to community development councils in Afghanistan or community-based justice for the poor projects in Sierra Leone – that illustrate the critical role of the poor in getting interventions right.


How Are We Moving Forward?

Bottom-up, it seems reasonable that we all continue investing in those interventions that give control of development decisions and resources to community groups, the poor, and the marginalized. In fact, we now know that Community Driven Development has been a key operational strategy for the delivery of services in the poorest regions, villages and households; and for the empowering of the poor. We also know that these interventions will need to confront challenges and work out problems, some as difficult as their scaling-up beyond a handful of communities (more so in conflict, post-conflict, fragile and disaster management contexts).

Top-down, initiatives like Mapping for Results have geo-referenced projects at the community level and has then provided technological tools to engage them in projects. For policymakers, the tools have helped visualize and geo-reference evidence on the efficacy of programs and interventions across the world. The innovative approach is enabling decision makers to plan more effectively and enhance citizens’ social accountability. Information portals open to the global public include Open Data, OpenAid, Development Marketplace, and the soon-to-be-launched Visualize Inequality dashboard, and we can expect a more innovative use of technology associated with this data openness.

However, along with transparency, political willingness is indispensable. The Global Partnership for Social Accountability, for example, supports civil society and governments to work together to solve critical governance challenges in developing countries. As of today, 37 governments from all regions in the world have opted-in to the GPSA allowing the provision of direct funding to CSOs operating in their territories. In addition, more than 130 organizations have joined the GPSA as "Global Partners.”

But going back to the post-2015 development agenda, the international community and national, regional and local partners all need to keep working towards the inclusion of gender equality, empowerment of women and marginalized groups and the promotion of equal opportunities as key focal areas. Let’s make certain that this time we can ensure that these commitments respond to popular demand. Dear Jose,
Very interesting article and always honorable to talk about poverty (extreme, ultra, and others). I think all agree that any efforts are always welcome when it comes to poverty..gender equality ....but could these ill-informed call-to-action increase fragmentation, reduce opportunities for sustainability, and maybe even create more inequality.
Like you I have spent (still in LAC) most of my time in Latin America. The continent is probably one of the best example....when it comes to the poverty dilemma. It is host to a great majority of Middle Income Countries and the three countries that generate most wealth in the region are home to 60% of the poor in Latin America. It doesn't take a lot to do quick math and to see that unplanned "poverty" policies could even work against any sustainability concept for the region. Most countries in the region; can't generate sufficient energy, are built on crumbling infrastructures, and have little capability to generate taxes to mitigate social and environmental impact....and even if they would collect more taxes out of the informal economy...would it really serve the most needed.
I like your quick scan of some of the WB's work and project but how viable will it be for the region, Africa....or the rest of the world to be successful and eliminate extreme poverty. What will be the impact on food prices, on energy, on access to water? Will they be able to access education or health?
There are lots of APP that increases citizen's participation but what if no one is listening at the other end. I could map gazillions of roads in severe conditions but government can't fixed them. I could write about the poor conditions of the health care system but the govt doesn't have new money to fix them.
Is $1.25 a meaningful indicator?
If they drive? could any of the major cities in Latin America absorb them without careful planning and substantial investment!? Panama is a perfect example" small and manageable! but they can't generate new energies...people are on energy ration.
Could this unplanned growth worsen the current conditions? The region (Africa and Asia) as well is plague with low employment -- who will hire "them"?
I think it's very honorable to have these grand vision but we may do more harm to the one we want to help if these grandiose campaigns are ill-informed and lack long term commitment.

Transparency is a two way street. It is good the UN and the World Bank are more open about how decisions are made. And it is good that they demand the same from countries they assist. However, we still have to go a long way to ensure that investments in development do yield the maximum return. We must be transparent about the results we can. We can make things work or make excuses for not achieving the planned results. I prefer the former. We know the poor have worse health outcomes and die younger and that the high cost of health care bankrupts families everywhere. In global health, the bank has made many investments. It is time to look back and measure their ROI and find new ways to make things work. We need projects that strengthen the country's programs not weaken it. For example, polio eradication is good but not at the expense of the country's immunization program and of other diseases such as measles and TB that also need to be eradicated. We need projects that leave a country's health program working better than when it started and the health system delivering better quality care for more people. In the case of polio, we must eradicate it by improving a country's immunization program and ensuring the health system continues to immunize very child that is born at the right time with the right vaccine after the donors stop funding it. It is simple, not easy, though. We first have to realize that the old way to working in development does not lead to lasting results and donors have to be transparent because they are part of problem and the solution.