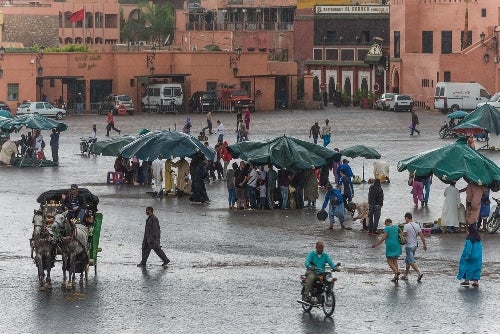 Can results-based financing help countries better prepare for natural disasters?  Can we use financial incentives to promote disaster prevention instead of disaster response? And how can insurance programs mitigate the financial fallout that often accompanies disasters?

In Morocco, we’ve been working with the government to pilot the World Bank’s first Program-for-Results (PforR) loan in disaster risk management and resilience. This PforR adopts a rare and integrated approach to strengthening a country’s resilience to natural disasters by: Incentives for Institutional and Physical Resilience

Over the past few years, Morocco has reformed its disaster-risk management practices  by repositioning its Fonds de Lutte contre des Effets des Catastrophes Naturelles (FLCN) from a fund focused on disaster response to one focusing on disaster risk reduction. This type of ex-ante—or preventive—risk reduction is rarely pursued on a large enough scale.

This is partly because disaster risk management doesn’t have a natural home in governments; countries often face inter-governmental coordination challenges; and, in the face of more urgent and immediate needs, there are usually competing budgetary priorities. This means action is often taken only after a disaster strikes when it is too late.

The reformed FLCN—repositioned as Morocco’s emerging “National Resilience Fund”—has a specific mandate to promote and finance ex-ante risk reduction projects. Morocco’s new fund provides grants for disaster risk management projects to local governments , as well as to government ministries and agencies based on clear and transparent selection criteria. Two ministries traditionally focused on ex-post response, the Ministry of Interior and the Ministry of Economy and Finance, are in particular driving this reform effort.

What has made the Bank’s support for Morocco during project preparation particularly interesting has been the process of structuring the Bank’s engagement as a PforR. This has allowed us to focus our dialogue with the government on higher level objectives, such as key strategic institutional reforms, defining selection and investment criteria, and on the inclusion of community and citizen participation. It has also allowed us to design disbursements conditioned on the actual disaster risk reduction results of projects on the ground.

Morocco is not the only country pursuing such disaster prevention strategies, but it is the first to do so using a results-based financing approach.

The PforR structure has also enabled us to introduce incentives for the implementation of Morocco’s national catastrophe risk insurance program. The program relies on a dual system to provide coverage against catastrophic events for both insured and uninsured households.

It builds on the domestic private insurance market to provide insured households and businesses with compulsory coverage against catastrophic events through an additional catastrophe risk premium. The provision of catastrophe risk insurance through a public-private partnership is common in developed countries but much less so in emerging economies. Turkey set up a Catastrophe Risk Insurance Pool with the help of the World Bank in the early 2000s, for example, but few emerging economies have followed suit.

This is a win-win for both the government and the households: the government can better plan for possible disaster costs, avoiding potential costly budget reallocation post-disaster, and it can also better control its contingent liability related to disasters. Poor households have the assurance of receiving financial compensation in the event of a disaster.

The government is also working on complementing Morocco’s catastrophe risk model with a financial model to quantify the financial exposure of the catastrophe risk insurance program and find fair cost-sharing rules between the various stakeholders—government, private insurers, households, and businesses. This will help determine the required government financial contribution to the Solidarity Fund.

Good timing in light of COP22 in Marrakesh this year

Overall, Morocco’s disaster risk management and resilience program is in its early stages, of course, but we hope to extract lessons from it as its implementation unfolds.