President Xi Jinping announced China’s aim to achieve carbon neutrality before 2060 in September 2020. This is a positive signal from the world’s largest greenhouse gas (GHG) emitter and significant source of global energy finance. For China to reach carbon neutrality and contribute to the 1.5-degree climate target, a recent study by Tsinghua University suggests that GHG emissions will need to be reduced by 90% from peak levels. China will need to rely on technologies that do not exist today, and its national emissions trading system (ETS) could have a unique role in stimulating low carbon innovation and reducing emissions at least cost. The State and Trends of Carbon Pricing (2020), now available in Mandarin, provides, among other things, an update on China’s upcoming carbon market. At the time the report was published, there were 61 carbon pricing initiatives globally that had been implemented or scheduled for implementation.

The Government of China published the Work Plan for Construction of the National Emissions Trading System (ETS) in late 2017 to highlight key development phases for the national ETS. The initial phase is expected to cover the electric power sector (around 9% of global GHG emissions and 30% of China’s GHG emissions). On November 2, 2020, the Ministry of Ecology and Environment (MEE) released a set of draft ETS rules for public consultation, setting out detailed design related to offsets, participation thresholds, allocation approach, registry and penalties, among other things. On November 20, 2020, MEE also released the draft 2019-2020 emission allowance (also known as quota) allocation plan for the power generation industry. The draft allocation plan specifies benchmarks and covers 2,267 power generators, including standalone and industrial captive power plants. Figure 1 provides an overview of key milestones. 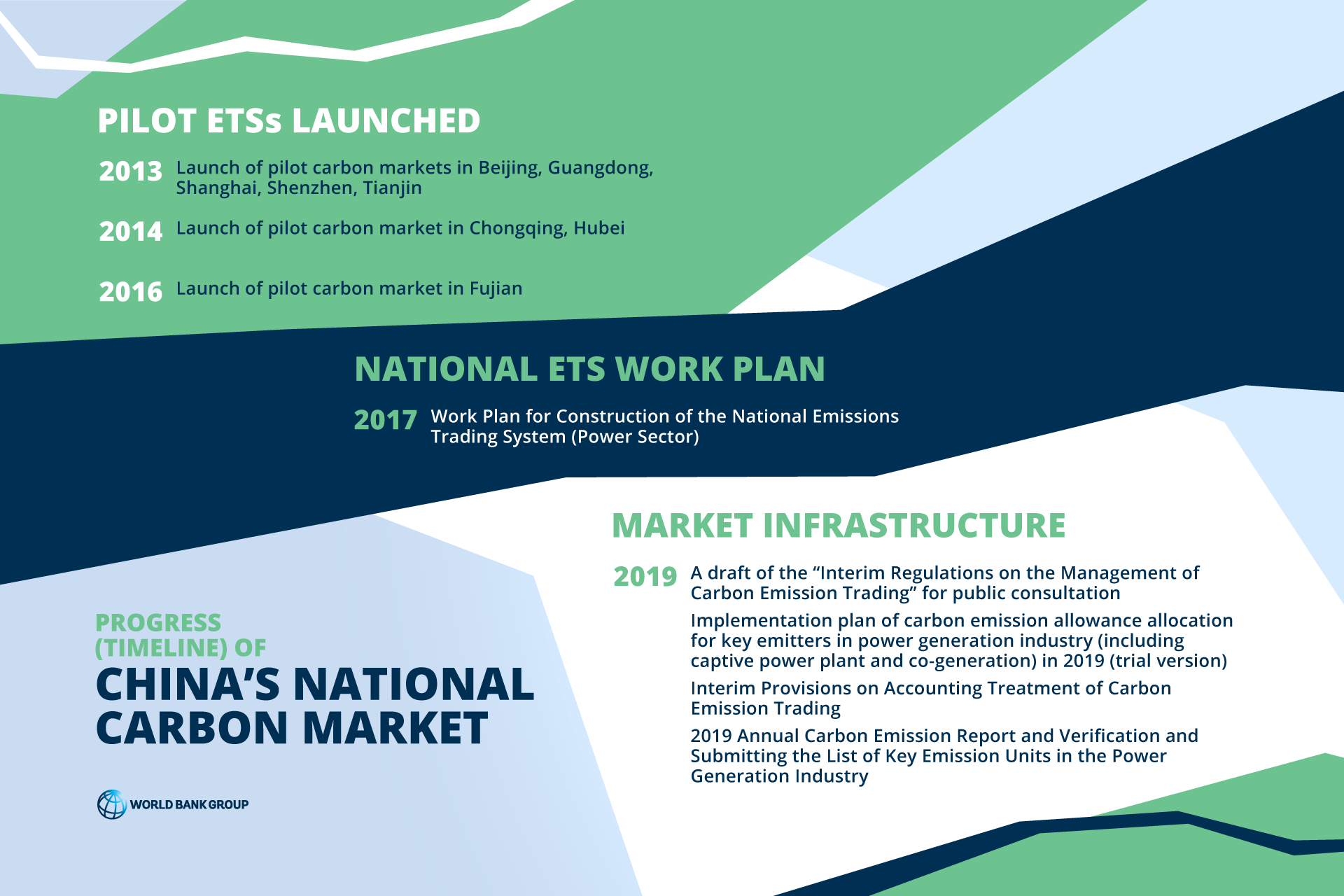 Regulating the power sector is a natural starting point for an ETS: emissions data is relatively robust, there are fewer facilities to cover, and the sector accounts for a significant share of the country’s emissions.  However, China’s power sector is also subject to pricing, dispatch and transmission regulations that alter the ability of regulated entities to pass on the carbon price signal to consumers, reducing the impact the carbon price will have on industrial emissions. Currently, the industrial sectors account for 70 percent of the carbon emissions as they are reliant on fossil fuel and electricity inputs, compared to 30 percent of emissions in European countries. Until the power sector is reformed to allow cost pass-through, these industries would need to be regulated to drive emissions reductions. As it stands, the initial phase of the ETS will interact with a complex web of existing policy instruments in the power sector. Addressing potential conflicts and coordinating to enhance complementarity between the ETS and existing instruments is critical. These may include dispatch reform, caps for fossil fuel consumption, subsidy shifts to move financing away from coal and other fossil fuel sources, among other measures from China’s ongoing structural reforms to the power sector.

From 2013-2020, the World Bank’s Partnership for Market Readiness (PMR) supported the design of China’s ETS. Mobilizing international experience and world-class expertise, a range of activities were supported including 23 research projects, capacity building programs for more than 13,000 participants, and baseline data collection of key provinces and cities. Among the research topics, the PMR analyzed whether China should allocate allowances using an absolute or a rate-based approach (also known as sector benchmarks). For China, strategic plans and local conditions meant that it decided to use a rate-based approach to set clear carbon intensity benchmarks to power generation facilities defined by capacity (below or over 300MW) and fuel types to incentivize the more efficient producers. Industrial sectors typically have a various of products, which will require a richer set of benchmarks of the sub-sectors to facilitate industrial restructuring. The benchmarks are set to be updated on a regular basis.

Rolling out the world’s largest ETS in cities and provinces that are unfamiliar with environmental market mechanisms is not easy.  While China works on its national ETS design, it continues to operate pilot ETSs in eight cities and regions (see figure 2). It is now imperative that the national ETS is rolled out as soon as possible with a clear integration plan for these pilots in order to safeguard market certainty and emissions reductions from these ETSs. 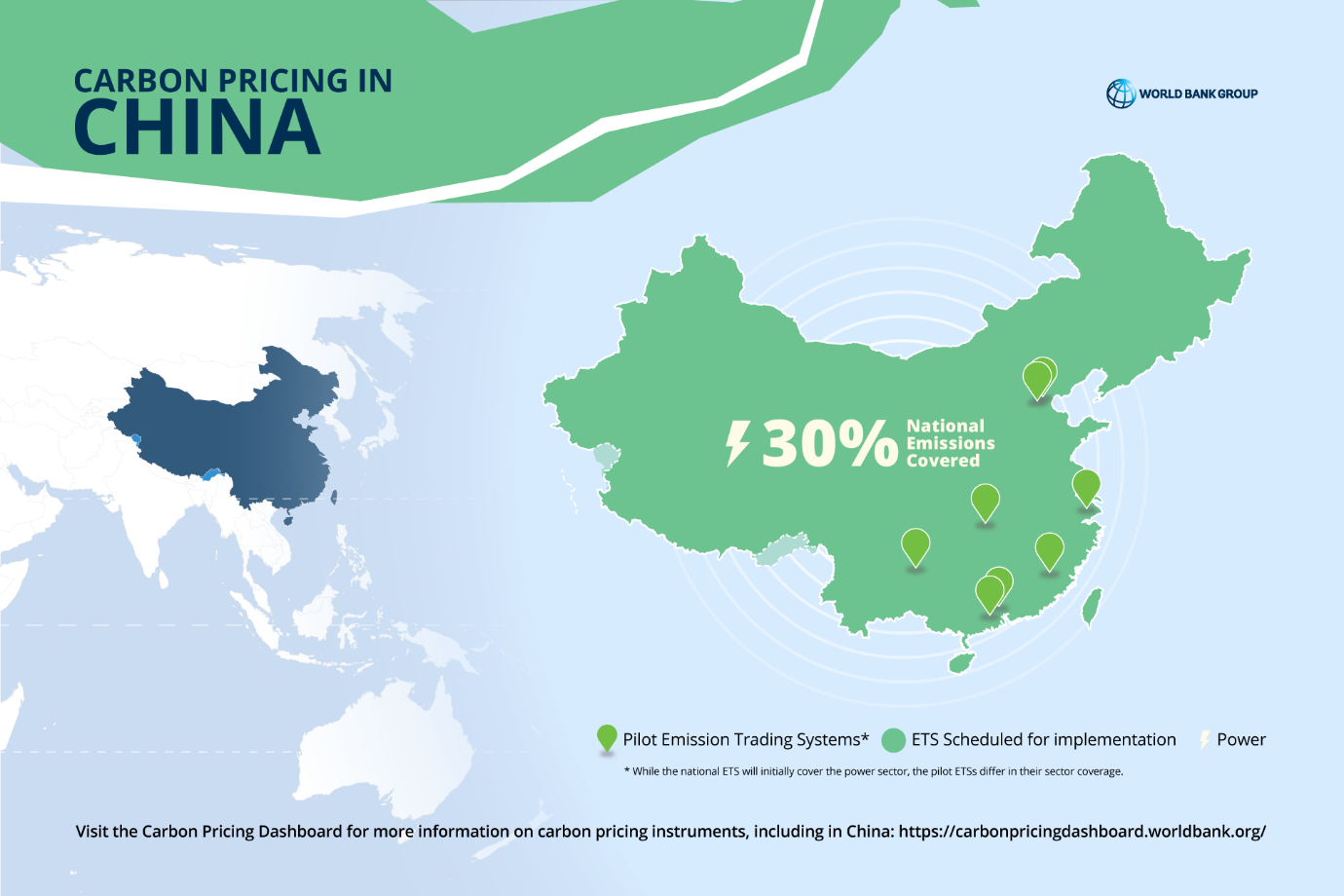 As China develops policies to reach carbon neutrality, the role of the ETS should be better defined to accelerate its roll out. Legislation should be expedited to provide the most critical legal basis. In the meantime, other steps will also need to be taken. For instance, as part of China’s 14th FYP, the government can align the cap of the national ETS with its 2060 carbon neutrality target. Coverage should expand to other sectors like steel making, cement and chemical production. This would be in line with other carbon pricing jurisdictions, such as Chile, Iceland, New Zealand and Switzerland, which expanded their carbon pricing scope in the past year. As the system matures, auctioning can be introduced, generating a new revenue stream to meet policy priorities like furthering climate action, meeting development goals or addressing distributional concerns. In 2019, $45billion was raised globally through carbon pricing revenues.  As an immediate step, China should look to integrate and harmonize the domestic markets (national and pilots) and increase the liquidity and robustness of the market through introducing price control mechanisms and adopting the piloted trading products including carbon options or futures. Finally, China should continue exploring opportunities for international carbon market linkages.

As the world’s second largest economy, China’s experience will have a significant influence on other countries. Sharing lessons across countries, including through platforms such as PMR, will be key to building capacity and momentum for the global transition to a low carbon future.

The Partnership for Market Readiness is an initiative that brings together more than 30 countries committed to carbon pricing as part of their broader climate change strategy. Through a mixture of country-to-country exchange, funding and technical assistance, the program helps developing, emerging and transition countries implement and strengthen their carbon pricing policies.

International Institute of Green Finance (IIGF) is a university-based Chinese think-tank, one of the earliest among its peers to start research on climate finance entrusted by Chinese ministries, FIs, local governments and international partners. It has continuously published the flagship annual report- China Climate Financing for 9 years. A dozen of policy suggestions on climate/green finance have been adopted by high-level Chinese officials.
Topics
Climate Change
Environment
Countries
China
Regions
South Asia
East Asia and Pacific