More than ever, Afghanistan needs the international community’s continued support

Afghanistan has been one of the world’s most aid-dependent countries for nearly two decades . Donors are currently considering future aid commitments, with pledges made at the Brussels Conference on Afghanistan in 2016 due to expire at the end of 2020. At the same time, recent negotiations have raised the prospect of a political settlement with the Taliban.

In Kabul and in capitals around the world, many are asking if peace will allow Afghanistan to escape aid-dependence and why continued aid support is necessary after so many years.

Substantial aid support will continue to be required not just to sustain services and development outcomes in Afghanistan but also to support and consolidate any political settlement.

While there is scope to significantly reduce overall grants from current levels, substantial aid support will continue to be required not just to sustain services and development outcomes in Afghanistan, but also to support and consolidate any political settlement.

Afghanistan relies on grants to finance basic services and security

Grants also finance a large majority of security sector expenditures which impose a heavy burden on government finances (security spending is around 30 percent of GDP, relative to just three percent in most countries at Afghanistan’s level of income). Without elevated levels of grant support, Afghanistan would face both a drastic decline in the provisions of vital public services, undermining development outcomes, and a serious reduction in the government’s capacity to finance its security services. 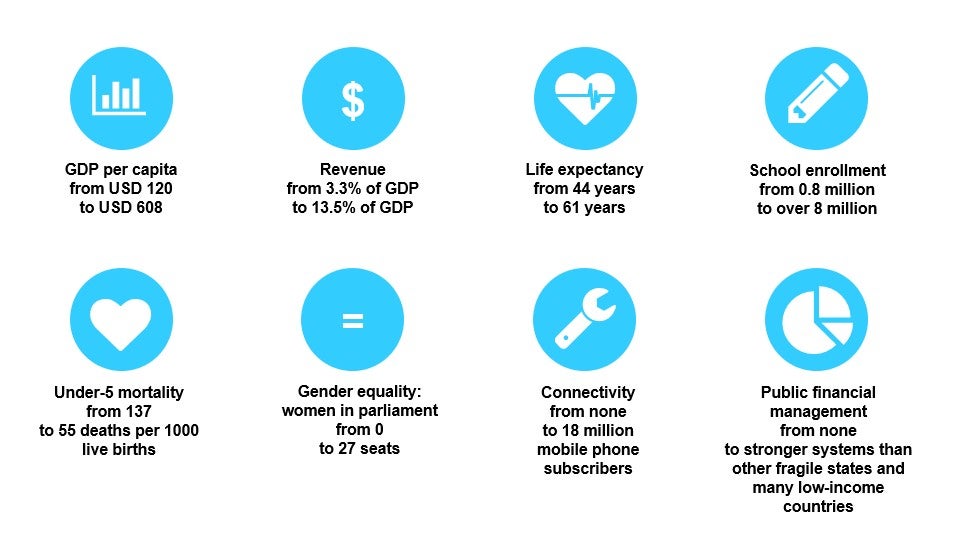 Afghanistan’s economy is currently growing at only around 2 percent per year, while the population grows by around 2.5 percent per year . This means that per capita incomes are declining, with more than half of Afghans now living in poverty. With such slow rates of economic growth, there are limited options for raising government revenues without imposing additional burdens on the private sector and investment.

Accelerated economic growth is the only viable path to self-reliance, but this – itself – will require increased public investment. World Bank analysis shows that Afghanistan has substantial growth potential and could achieve growth rates of more than 6 percent per annum if new growth sources could be mobilized – especially in extractives and agriculture.

A political settlement with the Taliban may generate major new economic opportunities through improved investor confidence and lower costs of business.

But expectations regarding the economic and fiscal impacts of a political settlement need to be realistic. Insecurity and violence may continue long after any political settlement given the difficult political context and presence of other insurgent groups. Political deals involved with settlement may take time to be resolved, leading to continued uncertainty for investors and deterring any influx of investment capital .

Crime and corruption are likely to continue to constrain business activity. International experience shows that security sector expenditures are not easily reduced, and in fact often expand, following peace agreements as insurgent combatants are absorbed into the security forces.

At the same time, a political settlement may also bring additional financing needs. World Bank analysis shows that programs to generate jobs, expand services, and reintegrate combatants following any political settlement could cost up to US$1 billion per year over five years .

Afghanistan requires the continued support of the international community

Overall, now more than ever, Afghanistan requires the continued support of the international community . Afghanistan is on the path towards self-reliance, but that path is not short or easy. While the international community can and should gradually reduce grant support over time, these reductions need to be carefully calibrated to country needs and fiscal realities.