This is the twelfth post in our series of students on the job market this year.

The term nepotism was coined in the Renaissance when it was a general practice for Popes to grant privileges to their nephews, who were in many cases their illegitimate heirs. In modern bureaucracies, nepotism has worked as an allocation mechanism to secure office and positions to family members within the public administration. Even though this practice is illegal in most bureaucracies, recent public sector surveys (Meyer-Sahling et al., 2018) and anecdotal evidence suggest that this form of favoritism is still common. This is especially true in developing countries, where family ties are strong (Alesina & Giuliano, 2014) and career civil service systems are weak (World Bank, 2020, Grindle, 2010). Therefore, identifying the actual magnitude of this phenomenon, why it has been so persistent, and its consequences in modern bureaucracies are fundamental issues for the strengthening of state capabilities worldwide.

In my job market paper, I study the extent, functioning, and consequences of this form of favoritism within an entire public administration: The Colombian public sector from 2011 to 2017. In contrast to the recent works on political patronage and dynastic politics, my empirical analysis focuses on the role that family connections to top non-elected bureaucrats have in allocating and compensating middle- and lower-tier workers. Colombia provides an ideal laboratory to study this phenomenon because despite having a career civil service system since 1991 — as occurred in many developing countries — public sector managers and supervisors still retain a lot of discretion in determining public employment outcomes.

This form of “Bureaucratic Nepotism," as I call it, is extremely challenging to detect. Ideally, one needs to observe family connections between public sector workers and their career progression within the public administration. The latter must specify exactly when hirings, promotions, and pay raises occur since the manifestation of this form of favoritism is inherently dependent on the timing of the events. For example, the mere presence of two family members in the same institution does not directly prove the existence of nepotistic practices. People find romantic partners in the workplace or select into the same institutions for various reasons. Moreover, to identify nepotism econometrically, one must exploit variation in family connections that is arguably exogenous to the evolution of employment outcomes.

To overcome these empirical challenges, I collect and combine detailed biographical information, employer-employee records, and the mandatory but confidential disclosure of family ties — in the first degree of consanguinity and affinity — of every worker in the Colombian public sector for seven years. This extensive data collection effort and a novel method of family network reconstruction allow me to recreate the entire career paths of 1,083,714 civil servants and their extended family networks spanning more than 2,400,000 individuals via consanguinity and affinity ties (i.e., through blood or marriage ties).

My empirical strategy uses two sources of identifying variation. First, as in Xu (2018), I employ the timing of top bureaucrat turnovers to evaluate how changes in family connections to public sector managers and advisors impact the allocation and compensation of public sector workers. Second, I exploit a sharp discontinuity in Colombia's 2015 anti-nepotism legislation reform that prohibited the appointment, nomination, and contract of relatives up to four degrees of consanguinity within public sector organizations. Both sources of variation allow me to study the ultimate impact of family connections to top non-elected bureaucrats before and after introducing a more comprehensive anti-nepotism legislation.

From 2011 to 2017, I found that 38% of civil servants in Colombia had a relative in the public administration, 18% had a family connection to a public sector manager or supervisor, and 11% worked with a family member within the same agency. Furthermore, once family connections occurred, they happened among relatively close family members (between two to three degrees of consanguinity apart).

1.        How large are the returns of family ties to public sector managers and supervisors?

To answer this question, my empirical strategy exploits quasi-experimental variation in family connections generated by the turnover of top bureaucrats to compare the career progression of workers before and after one of their relatives becomes a top bureaucrat. I show that the career prospects of middle- and lower-tier bureaucrats are closely linked to the fate of their relatives as public sector managers or advisors. In particular, I find that a public sector worker is 40% more likely to be hierarchically promoted — with respect to the sample mean of promotions — and receives a 2% to 5% higher salary when becoming family-connected to a top bureaucrat. Moreover, these benefits are concentrated among extended family networks that are harder to identify by regulatory agencies. In fact, human resources in each agency are only able to monitor the disclosed family connections at one degree of consanguinity and affinity every period. 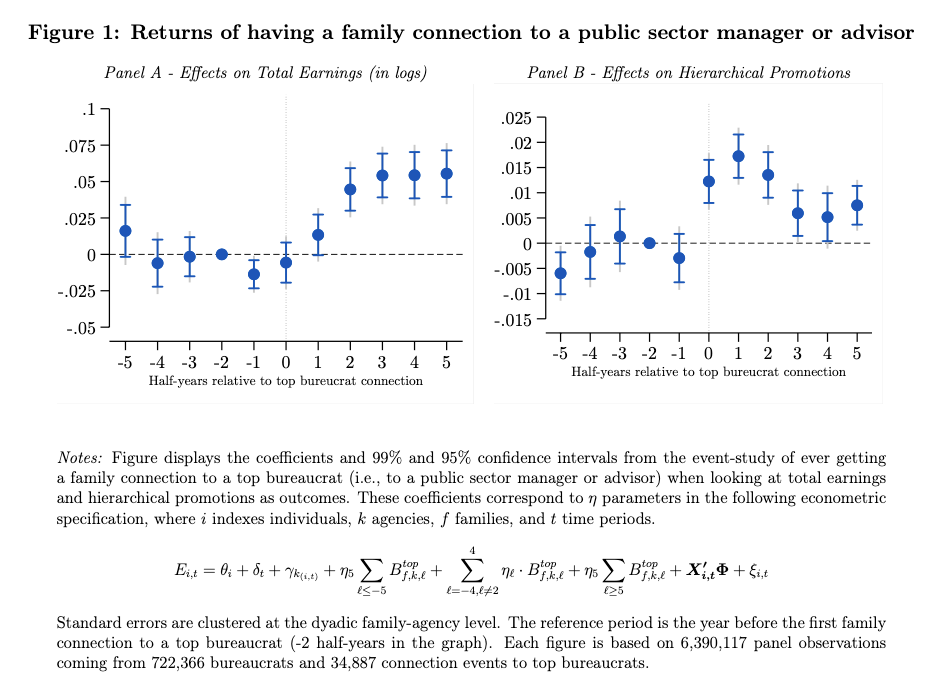 2.       Are these nepotistic returns still consistent with better screening workers via family networks?

Although the estimation of these nepotistic returns is already a sign of illegal favoritism in the workplace, a natural question to ask is whether such favoritism is, in fact, detrimental for the allocation and compensation of a more qualified workforce. To answer this question, I build on recent works by Benson et al. (2019) and Voth and Xu (2021) and estimate the differences in pre-promotion characteristics between promoted and passed-over bureaucrats when connected or not to top non-elected bureaucrats. I show that even though public sector managers promote, in general, better-suited individuals, they are also more likely to overlook critical qualifications when promoting family members. On average, promoted workers tend to have more education, public sector experience, and fewer records of misconduct. However, those positive differences either disappear or completely flip signs when promotees are related to top bureaucrats.

3.       Why has anti-nepotism legislation been so ineffective in preventing bureaucratic nepotism?

To address this question, I examine the degree to which the enforcement of an anti-nepotism reform in 2015 could effectively stop the spread of kin favoritism in Colombia. Using a Difference-in-differences identification strategy exploiting the discontinuity in the family ties restricted by this law, I found that even though the reform reduced the number of illegal connections by almost 15%, this policy change did not improve the quality of the workforce or stop kin favoritism from occurring. In fact, 40% of middle-tier and low-tier bureaucrats who were part of illegal connections before the reform kept their same jobs, 30% did not leave the public administration but simply reshuffled across public sector agencies; and among those who initially complied with the reform, leaving the public sector, around 10% returned to be part of nepotistic networks every period.  More surprisingly, I find that top bureaucrats strategically responded to this reform by substituting the use of hierarchical promotions for wage increases, which were not explicitly restricted in the anti-nepotism legislation. 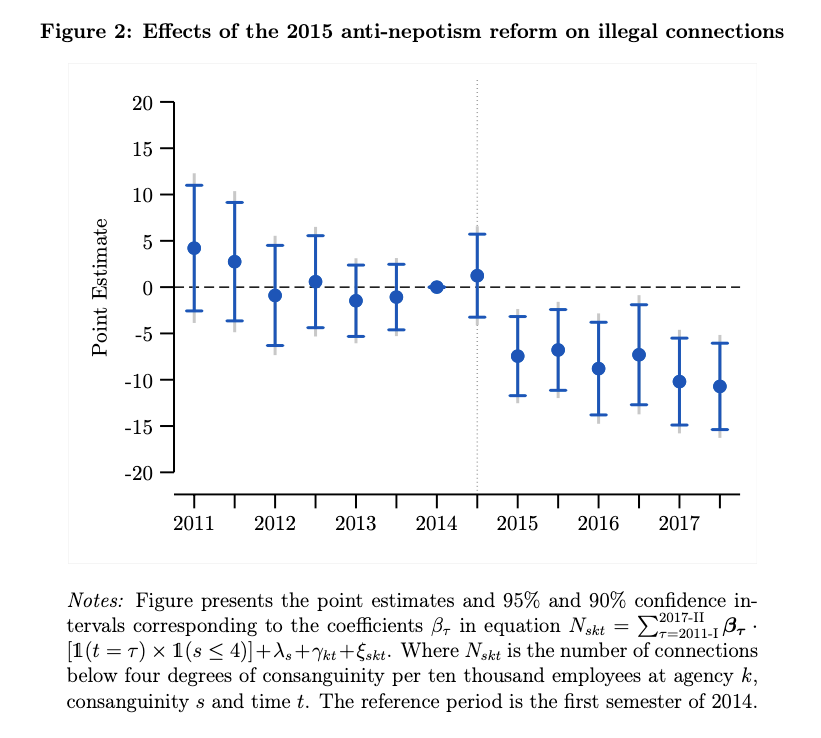 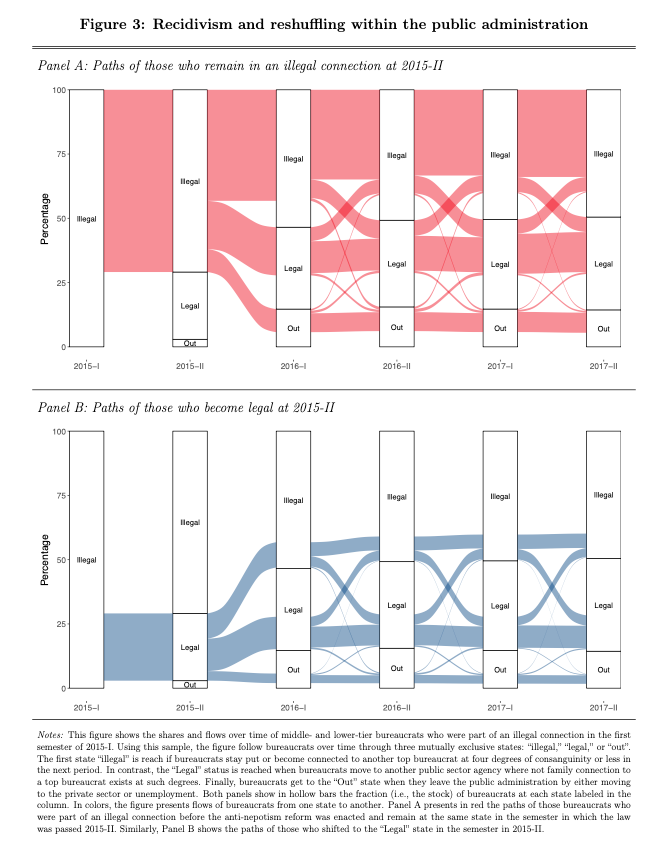 Taken together, my findings provide the first systematic empirical examination of bureaucratic nepotism and anti-nepotism legislation in an entire modern bureaucracy. My results suggest that family networks in general and family connections to public sector managers, in particular, can severely distort public employment outcomes with negative impacts on the state's administrative capacity.

These results have important implications and inform the debate of public sector reforms aimed to stop the spread of nepotism and other forms of corruption within public administrations. More specifically, my results imply that:

1.   Investments in automated technologies aiming to detect and audit bureaucratic nepotism might be necessary for boosting the enforcement of current anti-nepotism laws. And if properly executed, they could improve the quality of the workforce promoted in the public sector.

2.  The design of anti-nepotism legislation should consider the multiple margins of favoritism through which bureaucrats could strategically respond to the new legislation. In particular, it is crucial to pay special attention to the use of temporary contracts and appointments that could be used to reward, reallocate, and compensate relatives after the anti-nepotism law is enacted.

Juan Felipe Riaño is a Ph.D. candidate in Economics at the University of British Columbia.