Is this health crisis an opportunity to develop urban cycling in La Paz?

With an average height of 3,640 meters above sea level, steep streets, and intense and disorderly vehicular traffic, the Bolivian city of La Paz does not seem to be the ideal environment for the daily use of bicycles . Moving on two wheels in this Andean city, whether to walk, go to work or study, play sports, or carry out market purchases, is a challenge taken on by a few adventurers who are not afraid to sneak between the buses, minibuses or taxis that flood its streets.

The path towards creating a cycling culture still seems very long, as revealed by the low modal share of bicycle trips, which did not exceed 0.03% of daily trips in the city in 2018.

Due to the COVID-19 pandemic, between March and May 2020, the national quarantine imposed almost total restrictions on the movement of people, suspending motorized traffic, including public transport. As in other cities in the region, this situation caused the need to resort to alternative forms of mobility, generating a unique opportunity to encourage the use of bicycles. Could La Paz also take advantage of this situation? Which would be the way to do it?

To understand the challenges and opportunities around these questions, the World Bank and the General Direction of the Integrated Transport System of the Autonomous Municipal Government of La Paz carried out a digital survey in June 2020 in which 400 urban cyclists participated, who provided the first approach to the context of the use of bicycles in La Paz before and after the quarantine.

Between daring and indecisive

The survey revealed that the quarantine changed the mobility habits of cyclists, especially those who are interested and concerned about safety conditions. In effect, through a statistical analysis of the data, two groups of approximately 200 cyclists each were identified. Group 1, which we will categorize as “fearless, daring” cyclists, will continue to use bicycles despite the current unfavorable conditions; and group 2, who are "undecided but interested" cyclists, see this mode of transport as lacking in attractiveness and safety.

In the first group, cyclists who drive more than four times a week for non-recreational reasons (work, studies, shopping) have doubled, but there were no significant changes in the behavior of people who never used this mode of transport.

The second group seems to be extremely important because, according to international experience, it represents the potential people that could change their mobility habits towards urban cycling. This group of users is likely to make greater use of bicycles if safety and comfort conditions are improved.

These preliminary perception results from urban cyclists are very encouraging for the future:

In other words, traffic restrictions encouraged urban cycling even without public policies or connected and safe cycling infrastructure in the city.  It is a very positive sign that should invite local authorities and multilateral cooperation entities to think about how to more decisively promote the use of bicycles in La Paz. 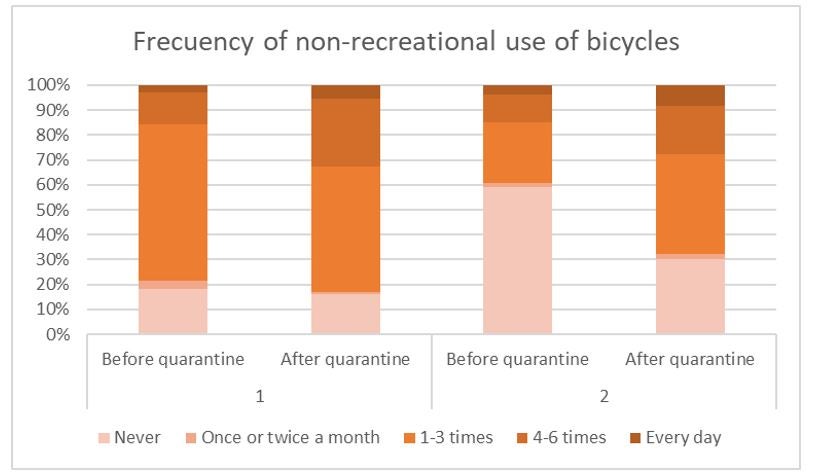 Likewise, the survey revealed that urban topography is not the main limitation for the use of bicycles in La Paz. Cyclists surveyed identified difficulties similar to those usually found in Latin America; two out of three stated that the greatest challenges in La Paz are vehicular traffic, the lack of safe parking for bicycles, and poor condition of the roads.

When proposing solutions, the respondents identified as priority needs safe infrastructure for cyclists with bicycle lanes separated from vehicular traffic (one of every two responses) and safe parking for bicycles. To encourage active mobility in La Paz, decision-makers could be inspired by successful experiences in the region.  This work generally requires to first define a bike strategy and generate an infrastructure plan as a structural component of urban mobility in the city, work that the World Bank has recently supported in the Peruvian cities of Lima and Callao.

Encouraging the use of bikes

The La Paz mayor's office and the State have already started to undertake actions to promote the use of bicycles. For example, solutions were developed to combine public transport with bicycles, such as the installation of bicycle racks on municipal buses and the free transport of bikes (Pumakatari and Chiki Titiseven routes). Also, cyclists can access with their bicycle the longest cable transport system in the world, Mi Teleférico, by paying a second ticket.

Although these initiatives have had a limited impact on promoting the use of bicycles as a mode of transport, they are a first step in the set of strategies offering an original solution to challenges related to the significant unevenness of the city. Likewise, inspired by the recreational bicycle lane model of Bogotá, since 2017 the municipality of La Paz has reserved two avenues for cyclists for a certain number of hours on Sundays. In June 2020,  a plan to build bicycle lanes was submitted by the municipality.

The COVID-19 pandemic has affected the global transportation sector as well as the people and businesses that depend on it in an unprecedented way. Rethinking mobility is now a priority to rebuild better, safer, more resilient, and efficient transportation systems all over the world.

Transport Consultant at the World Bank

Transport Specialist at the World Bank

Transport Consultant at the World Bank

A great piece of work done by the Bolivian Transport team. Biking is possible even in the highest capital!