Did you know that until 30 years ago, homosexuality was considered a mental illness by the World Health Organization (WHO)? The history of lesbian, gay, bisexual, transgender and intersex (LGBTI) people is rife with moments of exclusion, rejection, and discrimination for simply living out their gender identity or sexual orientation – for being who they are.

Although there have been many achievements in recent decades, LGBTI people still face many challenges. Today, 70 countries still consider homosexuality illegal, and in many more countries, violence based on sexual orientation or gender identity (SOGI) occurs frequently  and, alarmingly, with a significant degree of social acceptance.

In our region, the situation is far from optimal. Only 24% of countries in Latin American and the Caribbean recognize same-sex marriage, 67% do not yet have a law prohibiting discrimination against LGBTI people, and 64% lack legislation concerning gender identity. Even countries like Colombia and Brazil, despite having marriage equality, non-discrimination, and gender identity recognition, still register hundreds of murders of LGBTI people every year.

In this blog, we focus on Peru. Legislative initiatives were proposed in the country’s Congress three years ago to recognize equal marriage and gender identity, as well as adequately penalize discrimination based on sexual orientation and gender identity. But these have encountered various setbacks. In a country where violence based on SOGI remains all too frequent, legal protections for LGBTI people are essential for true inclusion. In terms of attitudes towards homosexuality, the Periodic Risk Intelligence and Security Monitor (PRISM) Annual Report 2019 indicates that social acceptance mostly ranges between intolerance and mixed tolerance and that the country represents a “Moderate threat” to LGBTI people.

Peru’s LGBTI people feel fear and insecurity about fully living their lives and true identities. This is clear in one of the few reports available with data in this area, the First Virtual Survey for LGBTI People, conducted by Peru’s National Institute of Statistics and Informatics (INEI) in 2017.

This survey included 12,026 adult LGBTI people, mostly between 18 and 29 years old. The main conclusion is devastating: 63% of the participants stated that they had been the victim of discrimination or violence. Even more worrisome, less than 5% decided to file a complaint about these incidents they experienced. Given the lack of data, many of these attacks go unpunished.

The fear of being attacked is often compounded by rejection from colleagues, friends, and family. More than half of respondents reported deciding not to freely express their gender identity or sexual orientation so that they could avoid suffering retaliation from their family or losing job opportunities. 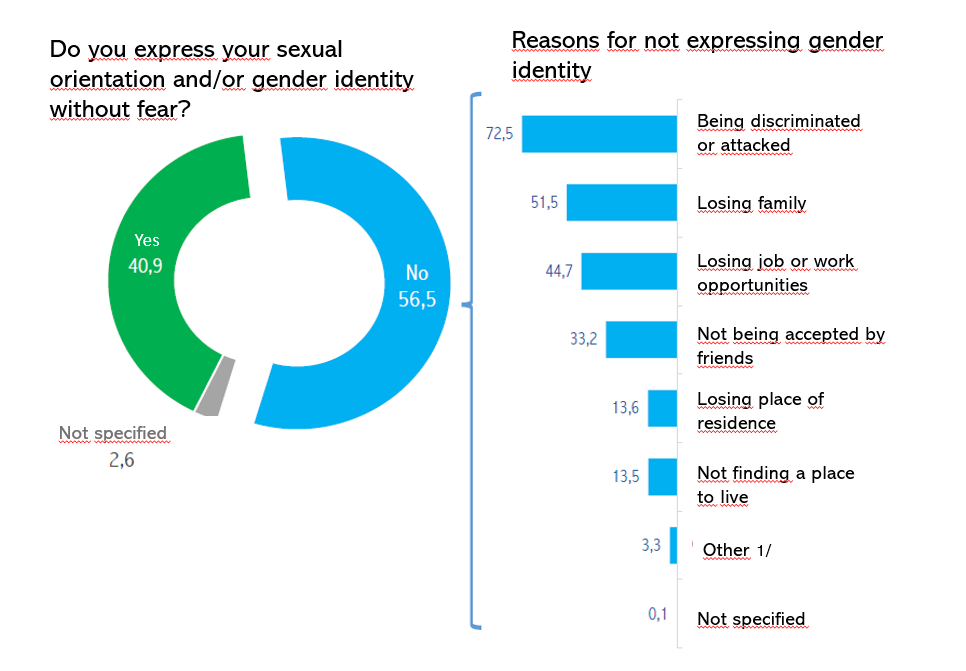 1/ Includes shame, insecurity, considering it a private matter, among others

This environment of fear and frequent discriminatory experiences has very negative consequences for Peruvian LGBTI people, who tend to isolate themselves , feel guilty and powerless in the face of what happens to them, and even turn to the consumption of alcohol and drugs. 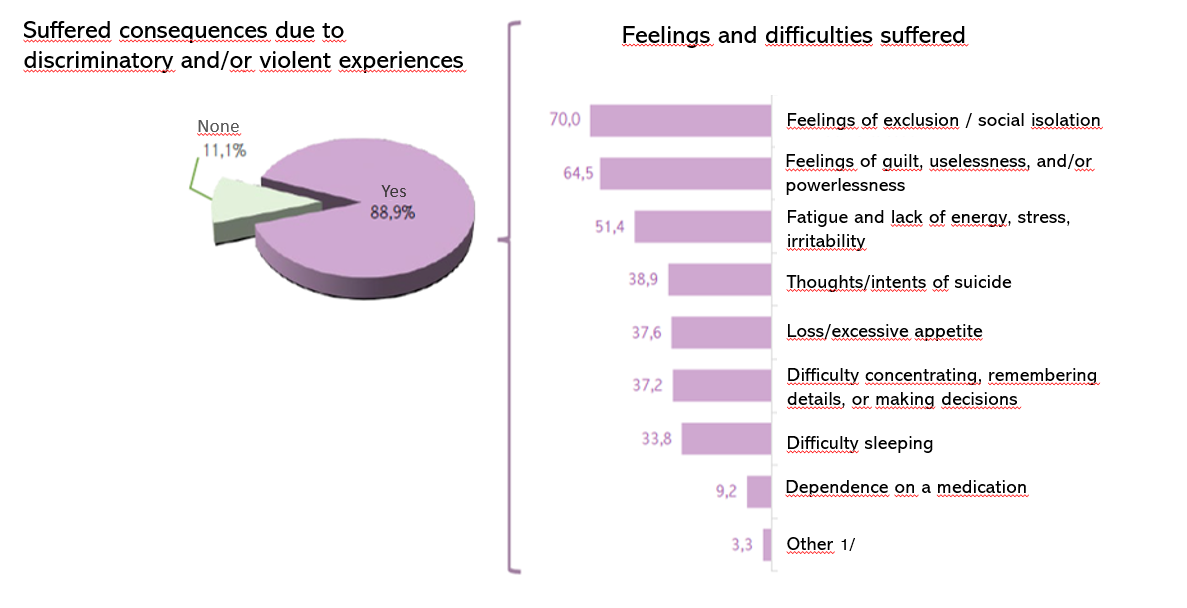 The impact of COVID-19 on the LGBTI community

The plight of Peru’s LGBTI people is further aggravated by the complex situation we are experiencing with COVID-19 . While the coronavirus can affect anyone, we know it impacts some groups disproportionately because of existing disparities based on gender, disability, sexual orientation or gender identity, or being an indigenous person or an ethnic minority.

Pre-existing inequalities are likely to be exacerbated by the pandemic, making it more difficult for those from disadvantaged and vulnerable groups to access critical services, including health care and social protection, and to practice social distancing. There is also a risk that existing divides in health, education, and employment could deepen during the COVID-19 response. In fact, there is evidence of increased violence and discriminatory treatment targeting sexual and gender minorities in some countries.

Like some other countries in the region, Peru implemented quarantine orders based on sex, allowing men and women to leave their home on different days, to enforce social distancing. The president and other senior government officials indicated the government was inclusive, that the measure should not be a pretext for homophobic attitudes and that no discrimination by the Armed Forces and the Police Forces was going to be tolerated. LGBTI organizations warned of the potential dangers of this type of measure and higher risk of discrimination. Subsequently, the government discontinued the measure after eight days. These and other policies highlight the importance of continued and open dialogue between LGBTI organizations, governments, and development institutions such as the World Bank to ensure an inclusive pandemic response.

The World Bank has a firm commitment to promoting the inclusion of LGBTI people and incorporating a gender perspective in all its work . In commemoration of the International Day Against Homophobia, Transphobia and Biphobia (IDAHOTB), we hosted a virtual meeting to learn more about the state of LGBTI rights in Peru and the needs of LGBTI people during the health crisis. Participants included prominent national leaders representing civil society and the government.

This exchange of ideas highlighted a crucial question: in the absence of SOGI disaggregated data, how can we start to generate a more favorable situation for LGBTI people in Peru? There are several initiatives by civil society, including documenting violence against LGBTI people, thanks to the efforts of institutions such as the Universidad Peruana Cayetano Heredia, the Articulation of Lesbian Feminists in Lima, the Féminas Organization, and the Organization of American States, among others. There is also the positive initiative of the INEI’s first Virtual Survey of LGBTI people in Peru. Continuing and expanding these efforts remains critical, and the World Bank is committed to helping governments generate SOGI-specific data, to better understand gaps and develop more inclusive public policies.