“What Haiti taught us all” 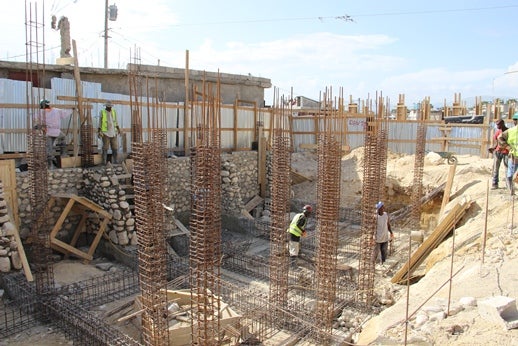 The January 2010 Haiti earthquake killed many thousands and caused damage and losses estimated at US$7.8 billion, more than US$3 billion of which was in the housing sector alone.

What might surprise those who have heard only anecdotal accounts of the shortcomings of the Haiti response is that some exemplary practices that emerged from that event have already been redeployed in other disaster responses.

Nevertheless, not all that took place was exemplary and organizations involved in Haiti recovery have subjected their own work to close scrutiny in the years since the earthquake. In 2014, the World Bank contributed to this collective stock-taking when it completed a unique analysis that involved crowd-sourcing among many who worked on Haiti recovery, to identify key risk reduction, shelter, and housing challenges and lessons learned

The World Bank, in collaboration with the International Federation of the Red Cross, UN Habitat, Habitat for Humanity International, and the Global Facility for Disaster Reduction and Recovery, reviewed in depth the Haiti response, with a particular focus on the crucial transition from sheltering to rehousing the displaced population.

The report (to be published by the World Bank in 2015) looks closely at how decisions made in the early emergency response period affected housing recovery.

The unexpected value of building assessment. The Bank and several other agencies supported the Government of Haiti’s decision to undertake an assessment of all buildings in the earthquake-affected zones, including all housing in informal neighborhoods, in an effort to prevent further death or injuries caused by unsafe buildings.  In the first 6 months after the earthquake, 250,000 buildings were assessed for habitability. Over eighteen months, more than 400,000 buildings were assessed.  The importance of this decision became clearer as time passed, as the data was used for unanticipated purposes such as to assess risk in neighborhoods and to estimate reconstruction costs. A lesson from this experience was not to assume a better assessment would follow in time, but to consider potential data uses upfront and to design the assessment accordingly.

The costs and benefits of T-shelter. A key decision was to construct more than 110,000 temporary wooden houses (known as T-shelters in Haiti). An estimated US$500 million were raised to support this strategy and many families were assisted. But T-shelters did little to reduce the population in the emblematic Haitian camps for internally displaced persons, since so many were renters with no land on which to situate a T-shelter.  In fact, for most renter families, camps were the only place to receive a T-shelter. Of the 123 sites still occupied in September 2014, housing 23,000 families, approximately 20 percent include mostly T-shelters, according to the IOM.

The usefulness of conditional cash transfers. Programs to repair existing buildings were underfunded in the early months of recovery, as donors struggled with technical questions and scaling up.  But the limitations of attrition and T-shelters as strategies for rehousing poor urban renters became increasingly obvious as the share of renters rose steadily in the camp population, which had otherwise declined to around 500,000 by mid-2012. This situation led to one of the real innovations of Haiti housing recovery – the rental subsidy program, in which the International Federation of the Red Cross, the International Organization for Migration, numerous NGOs, the Bank, and other agencies joined forces. Agencies funded a rental support cash grant to help families leave camps by covering moving expenses and several months’ rent.  Once this approach was standardized and reached scale, landlords responded with additional rental space, and the number of poor renters in camps significantly declined.

The challenge of recovery coordination. No analysis of Haiti recovery is complete without addressing two of the key problems in disaster recovery – institutional capacity and coordination. If by definition a disaster is an event that exceeds government’s capacity to manage, then coordination is what ensures that those who come to assist effectively fill those gaps. But finding the proper balance between solidarity and sovereignty, that is, providing assistance without usurping government’s prerogatives, is a critical challenge.  In Haiti, tensions that arose between Government, the newly-created Interim Haiti Recovery Commission, and outside agencies including NGOs around these questions at times threatened the entire recovery process.
The Cluster system and other mechanisms of the international humanitarian response and coordination architecture were duly deployed in Haiti even before the Post Disaster Needs Assessment was prepared.  But of the 10,000 NGOs active after the earthquake (according to a Brookings Institution estimate), only a small fraction were registered with Government or participated in Cluster meetings.
The forthcoming report examines these facts and asks how improved coordination might have made recovery more efficient and cost effective, and reconstruction safer, by requiring more specific measures to reduce vulnerability to earthquakes or other natural hazards.

What Haiti taught us all. Since the earthquake, the Government of Haiti has taken a number of steps to increase both the quantity and the safety of affordable housing. In particular, it created a coordinating body for housing and public building construction (Unité de Construction de Logements et de Bâtiments Publics) that oversees donor and government interventions in the housing sector, and has developed the country’s first affordable housing policy and its first slum upgrading strategy.
Internationally, the Haiti experience provided impetus to initiatives to standardize recovery coordination, such as the recent draft “Guide to Preparing Disaster Recovery Frameworks,” prepared by the Bank’s Global Facility for Disaster Reduction and Recovery, which have enormous potential to better define the rules for the planning, financing, and coordination of recovery, as has been so successfully done for humanitarian coordination over the last decade.
Thousands of Philippine citizens affected by Typhoon Haiyan have benefitted from lessons learned in Haiti, as disaster risk reduction became a leading principle of housing recovery and financial support to households’ self-recovery began immediately following the event.

Ultimately, no recent disaster demonstrates unequivocally that the lessons of Haiti have yet been fully absorbed, but we can thank Haiti for what it taught us about how to work together more effectively to achieve resilient recovery.
International agencies must continue to analyze critically and objectively their recovery programs and learn from them. But most importantly governments must learn these lessons and take them to heart, as should citizens, since they are the ultimate beneficiaries of well-run recovery programs.
Topics
Disaster Risk Management
Urban Development
Countries
Haiti
Regions
Latin America & Caribbean We have save and be ready to secure and protect the victims of natural calamities since they are in predictable and we can't forecast on them.

What is predictable is that calamities, both natural and human made, will come....and in the usual places; where the poor are. We know what the consequences of past practices are, but look at alternatives as "too pricy". If we can forcast the weather we can surely forcast the outcomes like in Nepal. I will let you forcast the next likely one. I know you can. Will you/

Congratulations and thanks to the authors for having summarized challenges found, applied strategies and lessons learnt in such a concise text! The work of international organizations in Haiti together with the Haitian Government and their results have been criticized very much, too much, mainly comparing numbers and figures, which have never come close to 100% perfect results. Of course not. Therefore it is important to explain, to point out and to publish what has been achieved, which strategies were new, which turned out to be wise, successful and replicable.
Due to dense urban context in and around Port au Prince and to various specific “Haitian” conditions, it was difficult to apply the vast experience gained in the context of other disasters, in rural areas, on other continents where the culture and societies are different … New approaches had to be considered and developed.
I agree completely: Haiti has taught us a lot!