Fish is the main animal protein for more than 1 billion people. Average worldwide fish consumption is about 20 kilograms per person per year . Marine resources are essential to the food security of much of the world’s population and Sustainable Development Goal 14 looks to conserve and sustainably use the oceans, seas and marine resources. Monitoring progress toward this goal is paramount but raises substantial challenges.


The world now farms more fish than it catches

Capture fisheries have dominated the seafood market until recently. Since the 1980s there has been a rise in aquaculture (fish, shellfish and seaweed farming), which now accounts for more than half of all seafood production. Countries in East Asia dominate capture fisheries and aquaculture production and together account for over 90 percent of global output.

Capture fisheries have generally stagnated since the early 1990s, and many governments have implemented subsidy schemes to protect local fish supplies and employment in the sector. Subsidies to fisheries total approximately $10 billion a year, driving continued fishing despite decreasing catch value and profitability.

Illegal and over-fishing threaten the sustainability of seafood production

Ensuring effective regulation of fish harvesting and stopping overfishing and illegal, unreported and unregulated fishing (target 14.4) can support the sustainability of the fishing industry, aquatic habitats, and biodiversity. Based on data for 54 countries and the high seas, illegal and unreported fishers catch 11–26 million tons a year, reducing revenues to legal fishers by $10–$23.5 billion a year. Low- and middle-income countries with weak regulatory and enforcement capacity are most at risk from illegal fishing.

Fish production accounts for a substantial share of economic activity in many economies, including Small Island developing states and countries in Sub-Saharan Africa. Target 14.7 looks to increase the economic benefits to producers from the sustainable use of marine resources. The livelihoods of approximately 60 million full- and part-time workers depend on marine capture fisheries, almost all of them in low-and middle-income countries and half of them women. Fisheries and aquaculture are dominated by small scale, family operations, most of which employ fewer than 10 people.

Protected marine areas have expanded but pollution has also increased

Marine protected areas can help rebuild depleted stocks and act as sanctuaries for biodiversity. As of 2014, approximately 2 percent of the global oceans have been designated as marine protected areas, with various levels of actual control of access. Target 14.5 seeks the conservation, by 2020, of at least 10 percent of coastal and marine areas. According to available country-level data, by 2014 South Asia had the lowest share of marine protected areas in its territorial waters. But all regions have achieved at least some progress over the previous two decades.

The state of marine biodiversity and of the global environment is closely connected with the level of marine pollution and acidification. The number of dead zones—areas of ocean with too little oxygen for most marine life—has increased by a third between 1995 and 2007, largely as the result of nutrient pollution. Dead zones now rank alongside overfishing, habitat loss, and harmful algal blooms as key stressors of marine ecosystems. There are  405 dead zones in coastal waters worldwide , affecting an area of 95,000 square miles.

Global distribution of 400-plus systems that have scientifically reported accounts of being eutrophication-associated dead zones: 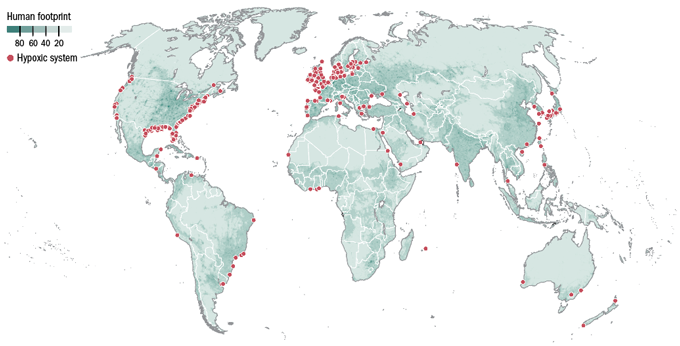 Increasing CO2 concentration in the atmosphere lowers the pH of the oceans, negatively affecting marine life by making shell-formation more difficult. Overall, the pH of the oceans has declined by 0.1 pH unit since the industrial revolution, a 30 percent  increase in surface ocean acidity.

Monitoring the global production of seaweed is also important, as carbon fixation by these large algae are one of the few practical means available for reducing both ocean acidification and global dependence on fishmeal as animal feeds. In 2012, 40 percent of global seaweed production was consumed directly by humans, 40 percent consumed indirectly through processed foods and 20 percent used in a range of industrial applications.

Data on the state of the marine biodiversity and the world’s oceans are generally weak. Investing in data collection and the enhancement of indicators related to ocean health and the sustainability of marine life is critical for the successful monitoring and achievement of the targets defined under SDG14. Aquaculture industry will continue to grow, and should be supported in order to become more sustainable. Special forces on the role that Algae can play in reducing the dependent on wild fish stocks for fish meal is vital as to sustain the Aquaculture industry in the future.