How do we define cities, towns, and rural areas?

Many countries use a minimum population size to define an urban area, but that size can be 200 (as in Denmark), 2,000 (Argentina), 5,000 (India) or 50,000 (Japan) or even 100,000 (China). Some countries don’t use a statistical definition but designate urban areas by administrative decision. In other countries, the sectoral employment or provision of infrastructure and services is used to determine whether settlements should be classified as urban or rural.

Finally, once categorized as urban or rural, places are rarely recategorized. Some of this resistance may come from the allocation of fiscal transfers – consider India, where getting reclassified as urban may cause places to lose government transfers, or Egypt, where getting reclassified as urban would trigger additional public investment for higher-level service delivery requirements, including police stations and courthouses.

A wide-angle view to measure urbanization

We decided to take a wide-angle view to facilitate comparability across countries. By introducing an objective and data-driven approach to measuring poverty and applying this approach globally , the Degree of Urbanization seeks to do for the definition of urban what the $1/day poverty line did for poverty measurement in the 1990s.

The Degree of Urbanization identifies three types of settlements: 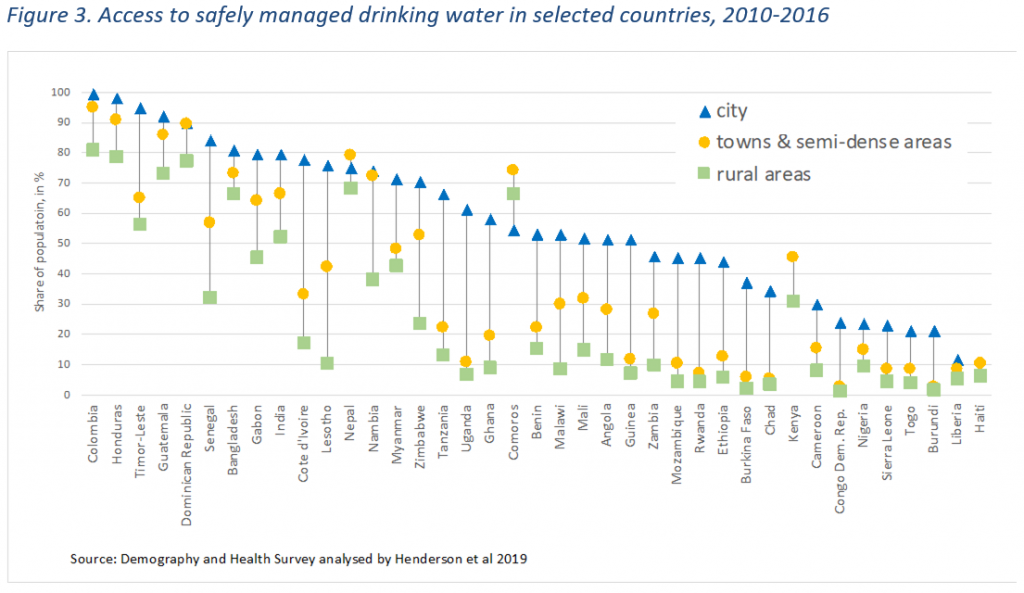 Comparing the Degree of Urbanization with other approaches

As with any newly proposed method, it raises questions, and people want to know how it compares to existing methods. The main questions raised by national statistical offices and academics are addressed below.

Applying the Degree of Urbanization to the global population grid GHS-POP results in an estimated rural population share in 2015 of 24%, which is considerably lower than the 46% based on national definitions (Figure 4). The main cause for this 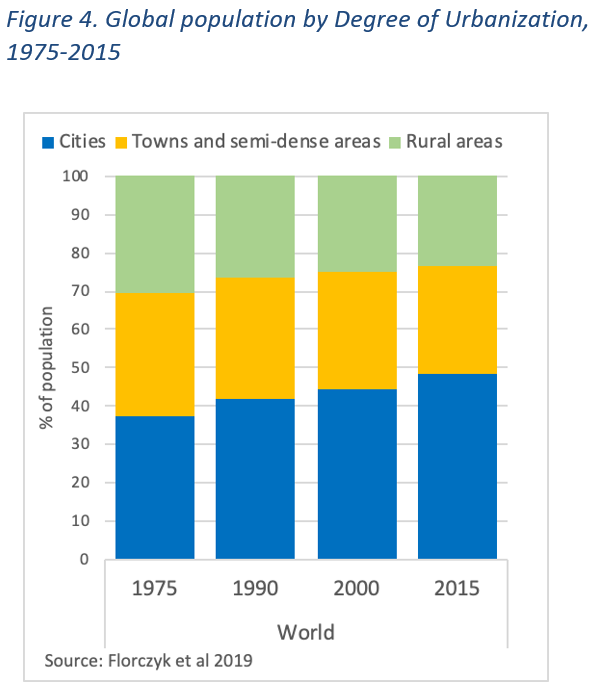 difference is that 12 large countries classify towns as rural areas. China and India account for half of the difference in rural population. China’s definition makes it explicit that towns and small cities are not considered urban, because they use a threshold of 100,000 inhabitants for urban areas. India uses a threshold of 5,000 inhabitants but combines it with other criteria, which leads to most towns being classified as rural. A further 10 countries account for 30% of this difference: Bangladesh, Democratic Republic of the Congo, Egypt, Ethiopia, Indonesia, Nigeria, Pakistan, Sudan, Uganda, and Vietnam. In short, 12 countries account for three-quarters of the difference between the rural population shares.

In some countries, population data with a high spatial resolution was not available. Applying this method to a grid based on more precise data may lead to higher rural population shares. 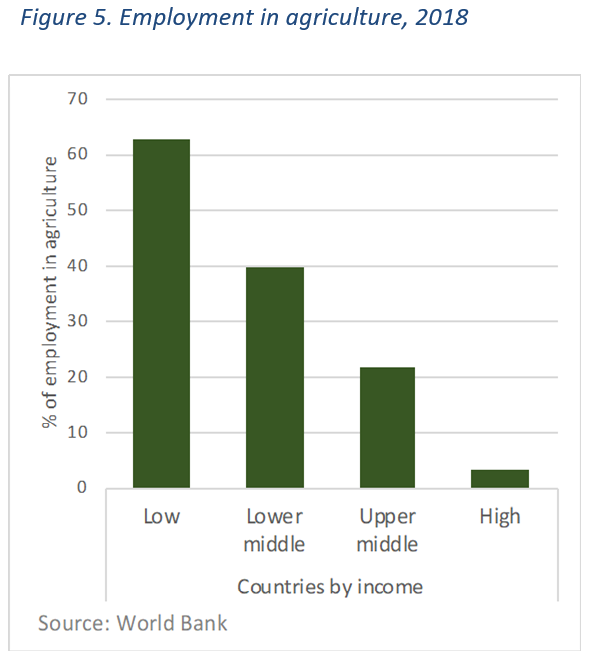 Thirty-seven countries have a national urban area definition, which includes a maximum share of employment in agriculture. These countries are primarily located in Africa and Asia. The employment share in agriculture, however, differs substantially between countries and by level of development. In high-income countries, it is 3% compared to 63% in low-income countries (Figure 5). Including such a criterion in a global definition would lead to entire countries becoming rural or urban, which would be an obstacle to comparisons. Furthermore, this share is dropping quickly. In 2000, 40% of global employment was in agriculture. In 2018, it had dropped to 28%. As a result, including this criterion would also reduce the comparability over time.

Historically, the data on buildings had a higher spatial resolution than data on people. As a result, definitions used buildings as a proxy for the spatial concentration of population. For example, several Nordic countries define a settlement as buildings less than 200 meters apart. Several academics also use buildings or built-up area – see, for example, the Urban Extent used by Shlomo Angel, Africapolis and the building density method developed by Marie-Pierre de Bellefon et al. 2019. With the improvements of population data, however, this indirect approach is no longer necessary.

The Degree of Urbanization method classifies cities, towns and semi-dense areas, and rural areas in a simple and transparent manner.  By standardizing the classification approach and applying it at the global level, it can help identify and measure the effectiveness of the policies in different countries that improve the quality of life in these areas. It will also help monitor access to services and infrastructure and other SDG indicators in a way that enables meaningful comparison and aggregation. This method will be further tested and implemented in many countries around the globe.

We welcome comments and questions regarding the Degree of Urbanization. Classifying urban areas according to population density is good, but what about industrial areas, don’t they count as urban areas?

National definitions already use population size thresholds. The benefit of this method is that it uses a single threshold for cities and a single threshold for towns. In that way, we can compare if all cities in the world have a hospital for example. It would be unfair if we compared settlements with at least 2,000 inhabitants in one country to settlements of with at least 100,000 another.

Hi excellent analysis and insightful comments. If possible, can you draw some attention to the oxymoron of Urban Villages. Where do they come from and what's their future ? Thanks

I welcome with great interest this new approach. Indeed, its simplicity is its strength. Population and density are understandable and usable concepts all over the world. As you clearly explain, its adds transparency and will allow a much more effective international monitoring process.
However, what we gain on the one hand, we lose it on the other hand. We gain easy worldwide monitoring of geographical characteristics (population settlements) and of general global objectives (like SDGs) which is, once again, a great step forward.
But we lose policy relevance.
Concepts of rural, urban or suburban spaces are used by policy makers to tailor social, economic or environmental measures. And population density is hardly ever the good driver for that.
If definitions are so different between countries, it is because they are carrying diverging political vision of space that are meaningful in specific contexts.
And unfortunately, when international comparisons reduce this diversity, they become less useful at national/territorial level.
Functionality is the compass which is guiding territorial policies today and geographical delineations based on settlement are simply not sufficient to drive policy making anymore.

The method is designed to classify administrative areas. These can be municipalities, but also groups of municipalities that work together to provide common services. This matching allows the definition to relate to boundaries used by policy makers. In some cases, these levels will match well. In others, they will not. For example, if an urban centre covers many different municipalities, these municipalities may want to work together to organise public transport and land use. The functional urban area definition is particularly useful for policy making given that it captures an area is likely to cover multiple functions: commuting, education, health care, culture…

Very insightful writeup on Urban areas, lets keep the conversation going. As researchers we need to develop a tool applicable across the board world over.

Thank you so much for the very informative blog and intriguing arguments. I found the suggested methodology simple and appealing, however for its wider adoption, I believe we need to insure its relevance from the perspective of national policy makers’ as well. In Egypt for instance, according to the proposed methodology, most desert settlements that are declared as cities will be reclassified as villages. This would be the correct if we overlooked the role these settlements play in relation to their surroundings settlements who are depending on them for the provision of key urban services- such as secondary schools or general or specialized hospitals. In doing so, including a criteria that consider the “City Region” might be of relevance. In doing so, settlements could be named as cities or towns if they are the sole provider of urban services to their neighboring communities within a radius of 15 or 30 kms, even if they does not qualify for the proposed population and density measures.

Indeed with this method, some cities or towns will not have secondary schools or specialised hospitals and some villages will. We think the presence (or absence) of these services should be used to characterise these settlements, but not change their class: for example "cities without a secondary school", "villages with a general hospital". By not including these services in the definition of what is a city, a town or a village, these services can be monitored more accurately. For example, it allows us to answer the question 'How many towns lack a secondary school?' In addition, the largest settlement within a certain radius could also be described as a local or regional centre. This would show which village or town is likely to provide services to a wider area.

Am I understanding correctly that your urban area definitions are based on long-term residency of persons?
This can be misleading in countries where vast numbers of workers live in urban areas, either only during part or all of the work week, or only for specific work contracts, and then either return to a rural area, or move to another urban center.
This is widely seen in China, but also in some African and South American urban areas.
My research has confirmed this for instance in Western Nigeria and Central Kenya.
Hence urbanization can be a much more hybrid concept than we may hitherto have assumed.

This definition is relies on the census 'de facto population,' not the 'de jure population'. This implies that some people would be counted where they live during the working week and others where they live on the weekend depending on when their census interview takes place. People living in two places are unlikely to have a big impact on this definition. It only takes 50,000 people to become a city. Most places that a have significant number of part time residents would be a city even if all the part time residents were not counted. In countries without good de facto population data and a significant number of people living in a city either part time or without being officially registered, the de jure population will underestimate the total population size of a city. Data from mobile phones could be used to estimate the 'de facto population' where this is missing.